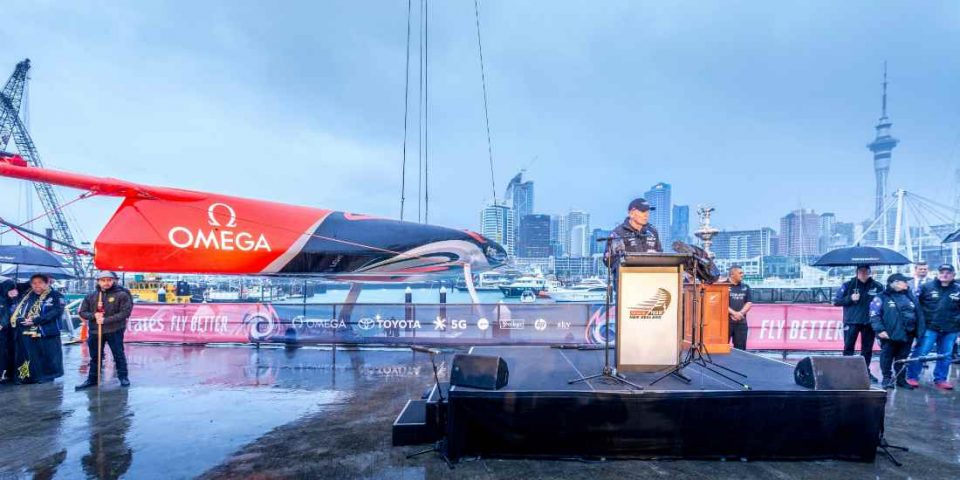 Eight months before the 36th match kicks off America’s Cup, Emirates Team New Zealand and his boss, Grant Dalton, are shaken by an alleged embezzlement of public funds that is making a lot of noise in New Zealand. Tip & Shaft looked at a story which is still running…

The case began at the beginning of the year when the Ministry of Business, Innovation and Employment (MBIE) applied discreetly to an independent firm, Beattie Varley, to lead an audit following a series of “serious preoccupations” about Americas’Cup Event Ltd (ACE), the company organising the 36th America’s Cup, which it subsidizes to the tune of 40 million New Zealand dollars (23 million euros) – the total investment of the State amounting to 136.5 million (80 million euros).

An interim report, delivered on 22 June and communicated to Emirates Team New Zealand, actually makes it appear questions about a $3 million loan ACE to the Kiwi Challenge and a transfer of 1 million (600,000 euros) to a Hungarian bank account.

The report then leaked to the press, triggered charges of embezzlement of public funds against Team New Zealand. The Defender responded to these allegations, saying that the $3 million in question is not a loan, but the reimbursement for the human and technical resources made available to ACE by ETNZ for their specialist work on the 36th Cup Protocol and the new AC75 rule.

Renowned Cup specialist, which he has been following for years on Sail-World.com, New Zealand journalist Richard Gladwell, interviewed by Tip & Shaft, supports this position: “One area that has been highlighted is the charging of the ETNZ designers to the Event (ACE) for the AC75 boat concept and development of the class rule. The way the financial purists have it the Event (ACE) should have done this work – but ACE had no-one. The only thing they could have done is what happened with the development of the VO65 – where tenders were called. But someone has to pay for that – and ACE would have been up for a lot of cost. There was no way the Kiwi government were going to be spending several million for the development of America’s Cup boats. The most pragmatic way was for ETNZ to use their expertise and simulators to work up and evaluate the boat options, and then work with others to develop the class rule.”

He adds: “I think there may be some differences of accounting opinion between those who are doing the audit and those who are running the financial side of the team. That is simply because people have been leading big sailing sponsorship projects for 30 years – and know how they work, and how they need to be put together financially and particularly to manage cashflow. You can’t look at them in a normal accounting sense of comparing one week, month, quarter, year withanother. It’s about juggling resources with the long term picture in mind, but also being in a position that you can change rapidly if, for instance, you get a couple of days notice that the whole country is going into a total lockdown for five weeks, right at a critical period for the design and build teams, and you know your competitors are not as badly affected. I am quite concerned about having ETNZ’s actions checked and audited at this stage of the Cup by a group of people who might be well qualified but with no America’s Cup project experience. ”

As for the million paid in Hungary, it turns out to be a scam that the Kiwi challengers fall victim to (a police investigation is underway) conducted by European hackers.

The revelations in the press prompted Grant Dalton, who also heads ACE, to counter-attack by denouncing “a deliberate, sinister, and highly orchestrated attack“, from informants “with questionable motives” who have been unmasked and immediately released from their contracts.

According to the New Zealand press, they are subcontractors specializing in sports events and recruited in September 2018, Tom Mayo and Grant Calder.
Executives of the company Mayo – Calder, they are based in Auckland and helped organize the stopovers of the last three editions of the Volvo Ocean Race. They are also under contract with COR36, the company created by the Challenger of Record – Luna Rossa Prada Pirelli – to organize the Christmas Cup in December and the Prada Cup in January. The latter and their accountant Michael Choy, who have not spoken publicly, have asked to be placed under the protection of Disclosure Act, a law protecting whistleblowers.

For many in New Zealand, this case highlights what some see as a conflict of interest in Grant Dalton’s double role, as boss of the defender and ACE, but also his power in the latter role.
“The establishment of ACE was made in the euphoria of the victory of 2017, Dalton was then the savior of the nation“ explains a well known follower of the Cup to Tip & Shaft. “But once the honeymoon was over the reality of everyday life has become more difficult, because the big problem is that Dalton isn’t one to share power, he only reports to himself and all the people he has put on the boards are under his influence”.

“Having the head of Team NZ also leading the events arm was always going to leave the syndicate open to claims of conflicts of interest and a lack of accountability. It seems staggering in retrospect that the government would invest $136.5 million into the event, without any requirement of independent oversight on the board” journalist Dana Johannsen says in Stuff, claiming for ‘the appointment of independent leadership’ at the head of ACE.

Another major player in the case is the city of Auckland – which has spent $NZ-130 million New Zealand dollars (75 million euros) on the development of the bases and the modernization of the city centre. They are observing cautiously but according to our source, the local authorities would not necessarily be willing to defend the ETNZ boss:
“You have to remember that, six months after the victory, Grant Dalton had put pressure on Auckland saying that if the city did not give sufficient resources for the event, he would organize it elsewhere, he had even stirred the red rag of an idea of taking it to Italy. And even today, there are rumors of discussions with other cities and other countries where to defend the Cup in the event of victory.”

The whole drama is heavily followed by the Kiwi media which does not surprise Richard Gladwell : “While Emirates Team New Zealand’s greatest strength is its fanbase in NZ, it is also its greatest weakness. There is a high degree of public ownership of the team, which is great when there is a regatta on, and they are winning, but it can work against them very quickly. Plus the media here can smell ETNZ’s blood very quickly – and that always has the makings of a primetime news headline story. This doesn’t happen anywhere else in the world. It’s part of being a mainstream high profile sport, and a team that has been a success for over 30 years.”

Another point is that there are elections soon [general elections on 19 September]…..as one observer adds, “There is an election here in 8 weeks so lots of stuff going on about government spending and a lot of Kiwis don’t like the way the government gave ETNZ 40 million for the event rights and another 100 million for the event, plus the infrastructure so a total of 250 million.”

In any case, this case has a direct impact on the organisation of the 36th Cup, since MBIE, pending the final results of the investigation, suspended the payment of the remainder of the grants on 30 June to ACE said to be $11 million of the planned 40. “For challengers, it also has an impact in the sense that the people fired were their daily contacts, it only makes the move to Auckland even more difficult, which was already complicated by the sanitary restrictions” adds our Cup specialist.

And in her article this week, Dana Johannsen points other possible consequences: “There is not just a government inquiry to play out, but potentially months of legal battles between Team NZ and axed contractors Mayo & Calder, who were responsible for the operational elements of the event’s delivery.”

Richard Gladwell puts the potential consequences of this case into a sharp focus, – “When people see these AC75’s whizzing past them about 50 – 100 metres away sailing at three or four times windspeed, they will soon forget last week’s ruckus” – the defender will come out stronger for having been under fire a few months before the very first regattas of AC75.