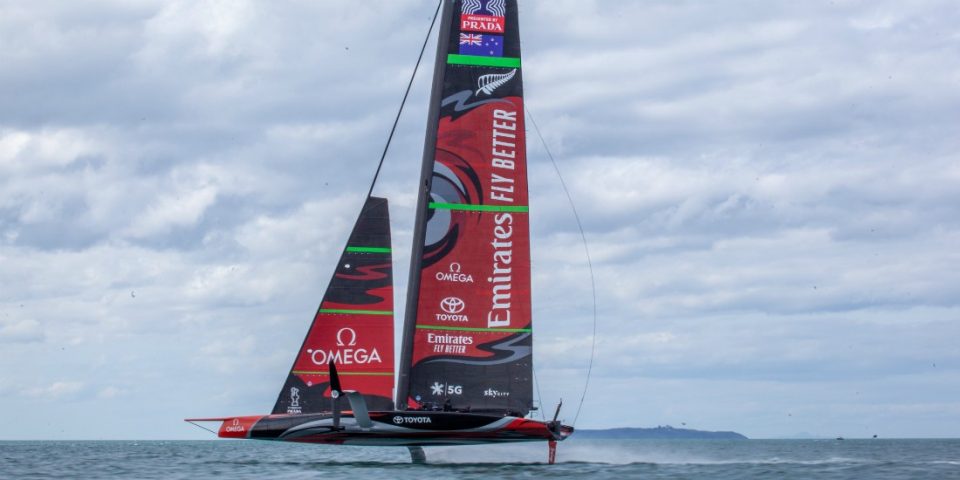 America’s Cup: The design wars are under way

At a little under one and a half years before the start of the 36th America’s Cup the first four AC75s were all launched within the space one month. What differences have been noted between these four boats? What is likely to the timing for challenges who are looking to launch their second boat? Tip & Shaft garners some ideas aided and abetted by architect Vincent Lauriot Prévost, Antoine Gautier who is Research Director at MerConcept, Martin Fischer who is in charge of the design team at Luna Rossa Challenge, and Dimitri Despierres who is part of the American Magic design team.

We had to wait until September 2019 to see the new AC75s, which were all delayed by a few months compared with the initial programmed timing mainly because problems of reliability occurred on the “foil arms” original designs (the support mechanism for the head of the foils which are a one-design unit). Emirates Team New Zealand was the first to launch Te Aihe on September 5th, followed by the Defiant of American Magic the following week. Then on October 2nd Luna Rossa on splashed their boat followed two days later by the Britannia 1 of Ineos Team UK. The only challenge we are waiting for is Stars + Stripes Team USA which has not announced a launch date, but according to our information, it seems more and more doubtful that the boat will be ready for the first Act of the America’s Cup World Series, in April 2020 in Cagliari, an opening event which theoretically is mandatory.

So what about the differences between the four launched boats? “It’s funny to see that with the same objectives and using tools which are not too dissimilar they come up with some fairly radically different choices in terms of the hull shapes and the  foils,” commented Vincent Lauriot-Prévost. In terms of hulls, Martin Fischer observes “There are two groups: the Americans and the English have a rather flat hull, while we and the Kiwis have this slender form extending under the hull”. Dimitri Despierres adds: “Emirates Team New Zealand and Prada have taken more risk in terms of hull forms that are out of the ordinary compared to us and Ineos”.  All, obliged to maintain their high level of secrecy,  will go no further to expand or explain these choices.

Vincent Lauriot-Prévost has his own idea on the question: “I imagine that in their modelling Team New Zealand and Prada saw a significant profit in having minimal drag in the phases when you fly low, but the boats parts the water from time to time and that causes a significant loss of power before you take off again. So we see this protrusion under the hull of the Kiwi boat (bustle) so that contact with the water is made with a section which is as slim as possible, and on Luna Rossa, it’s just like the V like on a speedboat, while the other two boats, it’s a whole dished shape which more area will make contact with the water but their hulls are more refined towards that pre-lift off phase with smoother shapes. ”

Antoine Gautier adds: “With their very wide hulls with more static stability, Ineos and American Magic, may stick to the water when they make small” touchdowns ” but the others have shaped shapes so that less area comes in contact as it  falls back into the water. What is interesting is the two teams with the earliest test boats, the English and the Americans, are the ones who drew the most stable hulls in the world. Is there a causal link, ie, they have found stability on the water to be an important issue?” Vincent Lauriot-Prévost  wonders, concluding : “We must not forget that they will make two boats. On the  first you can be more radical and on the second maybe a little less extreme in terms of hull forms.”

It will undoubtedly be the same for foils where the V1 boats show a lot of differences, some teams have even launched two different foils, as explained last week for Tip & Shift Nick Holroyd, the former Team New Zealand guru who is now Ineos design team boss: “Ourselves and the Kiwis have built different foils for different sides of the boat. American Magic seem to have a very similar foil on both sides of the boat. Likewise Luna Rossa although I think their actuation mechanism is different port to starboard.”

“What surprised me was that almost all the boats were launched with different foil geometries from one side to the other, between flat and angled, this is the proof that they are still looking” notes Antoine Gautier. Martin Fischer half-heartedly confirms: “We have the right to make six foils in total, everyone is in the experimental phase, we can not say that they are test foils, but there are still many uncertainties and in the next six months, it will be clarified.

Out of the four pairs that have so far been launched, there are two distinct families: one without a bulb, Team New Zealand, and the other three with, which leads Dimitri Despierres to say, “The Kiwis have gone for a very radical option without a bulb and with foils with large surfaces. That means they have put the weight in the wings and they must have believed that they needed a greater surface area to be able to take off. The others have bulbs and foils with smaller surfaces, so we can see a clear trend.” For Vincent Lauriot-Prévost, who pointed out that the bulb on Ineos is smaller than on Luna Rossa and American Magic, “It’s always down to the same problem: power against drag. The smaller the bulb, the less the drag, but that may mean less righting moment too.”

Antoine Gautier sees the debate elsewhere: “On Prada, you can see different systems to manage the flaps (which adjust the foils) between the port and starboard side. I think that it is going to be a very important question too. More generally, whether they succeed or not depends as much on the onboard systems as on the shape of the hull or foils. You may get it all right architecturally, but if the systems don’t work, it’s going to be a poor boat. Team New Zealand showed us that in the last Cup: you can allow yourself to have more unstable appendages, but be faster, once you have a system set up to deal with that instability.”

Martin Fischer confirms that. “Obviously one important thing on these AC75s, is everything you can’t see – the control systems, which are more complicated than on the AC50, and the adjustments for the foils and rudders.” For Jean-François Cuzon, who has been working with his company Pixel sur Mer with Ineos, “We’re entering a brand new era. It’s a huge challenge for the teams to understand quickly what works and what doesn’t. The Cup today isn’t really a battle between sailors, as they are all very good. The challenge is the design and learning about the systems and getting to grips with the boat as quickly as possible.”

The choices concerning the deck have been more or less the same with a double cockpit and boom that is very low down “to ensure that the boat and the sail become one,” according to Dimitri Despierres. “They all went for the option of two separate cockpits and an aerodynamic corridor, which the head sail rests on with the boom or edge of the sail, remembering that not all the boats have a boom,” noted Vincent Lauriot-Prévost. “What is going to be interesting is to see how the crew works: seeing you cannot go under the mainsail or boom, they are going to have to go behind it, unless there are two helmsmen…”

The design teams are all busy working on these matters as they think about the second boat, the construction of which is due to start before the end of the year. In other words, any hold ups with the first boat mean that you can’t really draw many conclusions about what they have seen when sailing, so most of the choices will already have been made. “They can’t put off starting the construction for very long,” confirmed Martin Fischer. “There will be some feedback, as even if we do lots of tests with the simulator, the boat will show us whether reality matches these tests and may mean some adjustments to the simulator.” For Dimitri Despierres, the advance obtained by the American Magic team, which launched their boat more than two weeks before the two other challengers Luna Rossa and Ineos Team UK, is a key element: “there are so many things that have to be checked out on the water that those two weeks are priceless.”

What about the programme for the 2020 America’s Cup World Series, which still has not been announced apart from Cagliari in April? According to our information, the second act will take place in early June in Portsmouth, organised by the New Zealanders, with the financial support of Emirates. The third will merge with the Christmas Regatta initially scheduled for late December in Auckland. To make up for lost time, the three challengers with two boats will probably deliver their second to New Zealand by plane rather than by cargo ship. “It’s much more expensive and far less sustainable,” we were told by a well-informed source. But it is only during the shipping period that they can save time.”