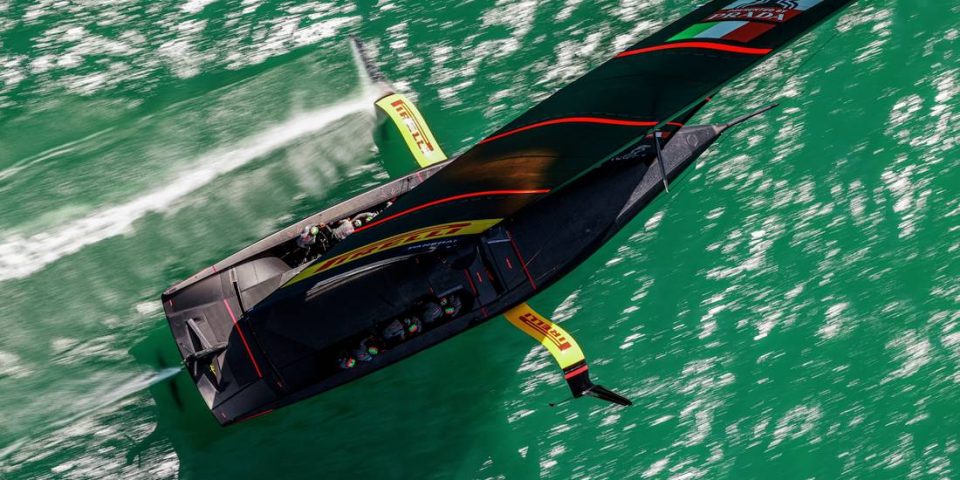 Now almost sixty, Bertrand Pacé is one of France’s most experienced match racing sailors (world champion in 1994), but has also taken part in the America’s Cup (seven times), and the Tour de France (eight wins). For the past three years, he has been working as a coach for Jérémie Beyou’s Charal Sailing Team. Before the start of the final of the Prada Cup on Saturday between Ineos Team UK and Luna Rossa Prada Pirelli Team, Tip & Shaft talked to the sailor from Dunkirk.

What is your appraisal of Jérémie Beyou’s Vendée Globe?
We are all pleased that he completed the race, remembering that it wasn’t easy for him setting off nine days after the others. Jérémie is a born racer, sails to win and not to follow the fleet. He had to find new goals throughout the race to remain motivated. It was also very important for the team, because the experience you accumulate in a Vendée Globe is very precious.

What did you like or not like in this Vendée Globe?
It was nice seeing boats finish so close to one another with such uncertainty, making Yannick’s victory even more remarkable, as it was not easy to achieve. It would have taken very little for Charlie to win, but we have to accept the decision made by the Jury a month before the finish. Helping each other is vital in ocean racing, and some people have said things are just not right. I don’t accept either the arguments put forward by Jean (Le Cam) about the costs. He is not that well placed to come up with that sort of comment given his past, as he has sometimes had one of the bigger budgets. Apart from that, what frustrated me was the fact that there were four hours between the rankings. In 2021, we should be getting more frequent positions to enable us to follow that much more closely what is going on.

Will you continue to work with the Charal Sailing Team?
Yes. Until now, it has been occasional work for 20 or 30 days a year. From now on, I’ll be more involved in everything to do with sails. There is a lot to find out from the race, and we need to compare our sails with those of Apivia and especially LinkedOut, who made an unusual choice of sails. We need to ask ourselves questions to improve in the future, in particular for the Transat Jacques Vabre in the short term.

Let’s talk about the Cup: have you enjoyed what you have seen so far in the Prada Cup?
When the wind is blowing, yes, a lot. The AC75s are not pretty to look at, but they are devilishly efficient. These are extraordinary machines upwind and downwind. We have seen various attitudes to risk-taking and navigational choices. The last race in the round robin between Luna Rossa and Britannia (Ineos Team UK) was fantastic with perfect conditions, that is to say a very shifty wind from the shore, meaning that a lot of skill was required. What the Brits did in this race was fantastic. They allowed themselves to take risks when necessary. I think that seeing the boats start upwind is a good step forward, as that means there is quickly a dominated and a dominating boat. Upwind, a lot happens when there are wind shifts. In the end, it is a real match race, and that is also down to the sailing area in Auckland, which is fantastic with a wide range of winds. You can have a SE’ly in the morning and NW’ly in the afternoon. Everything changes completely in a very short space of time.

A word about the elimination of American Magic…
I thought they were very fast in windy conditions, but when their boat was more or less destroyed, it was a huge loss for them as these AC75s are extremely complicated. Having said that, they probably made some mistakes. People are saying that in winds below 15 knots, they were finding it hard to take off, and it was clear that things weren’t as smooth as with the Brits for example. When you see how they communicate with each other, take decisions, while remaining calm and relaxed with just a few words required, so you know they have been working hard to be that smooth. Like the observers including those in other teams, I was surprised by their progress between the America’s Cup World Series and the Prada Cup. They managed to sort out their major problems with their hydraulics, but we weren’t expecting them to be as fast a month later.

Can you run through the line-up before the final of the Prada Cup?
In terms of speed, I think the Italians and Brits are very close. In February in Auckland, there is often a thermal breeze, so relatively light winds. Luna Rossa may find it easier to get going in these conditions. But looking at the way they are organised aboard, there is a difference. On the one hand, there is the classic match-racing method used by the Brits with a skipper taking the decisions and a tactician offering accurate information. On the other hand with the Italians, there are two helmsmen, one on each side. The advantage in terms of performance is that the helmsman becomes the foil trimmer on the other tack, and as he is used to steering, he better anticipates when the boat will take off. But I have some worries about this method, as I don’t know who is really taking the decisions. If however the Italians manage to be faster, they will win, as speed is the key factor in the Cup. It’s hard to predict who will win. I would say 51% Britannia, 49% Luna Rossa. I think that it is going to be close.

“The Cup is the pinnacle racing event”

The winner will be up against Emirates Team New Zealand. How do you feel about the defender?
We saw back in December that they found more speed than the others. They often got off to a poorer start, but ended up in front practically each time. In comparison to their rivals, the foil choices are very different: Britannia and Luna Rossa have dihedral foils (at an angle to the arm), while they are flat on Team New Zealand. Martin Fischer (one of the main designers for the Italian challenger) told me he hesitated for a long time before doing that, but the advantage of the former is that you can set the two parts differently, so limit upwind drift, which is not possible with a T-shaped foil, which has a greater wetted surface. That did not prevent the New Zealanders from achieving incredible speeds. Will the others have made enough progress to overtake them, remembering that it is always the faster boat that wins? We’ll see. However, in the start phase, I thought that Peter Burling was not at ease and made some bad mistakes. Was that down to him or the software giving him the wrong layline info? I don’t know. You have to understand that at these speeds, using your eyes is not enough. You really need a computer to be able to cross the line two or three seconds after the start.

When you see that, don’t you feel like getting out there?
Once you have tasted that, you never have enough. The Cup is the ultimate racing event, so it is slightly frustrating not to be in Auckland. It’s fantastic to see these boats. The lads must be really enjoying it, because this is a contest where enjoyment is the key to success. Obviously there is a lot of stress in such an event, but when stress goes beyond a certain level, it becomes fear, and when you feel that, you don’t sail well. Looking back at the Brits, we can see that stress levels are low. They never reproach each other and are free to make choices with the aim of sailing to win. In the race I talked about with Luna Rossa, the Italians were much more on the defensive.