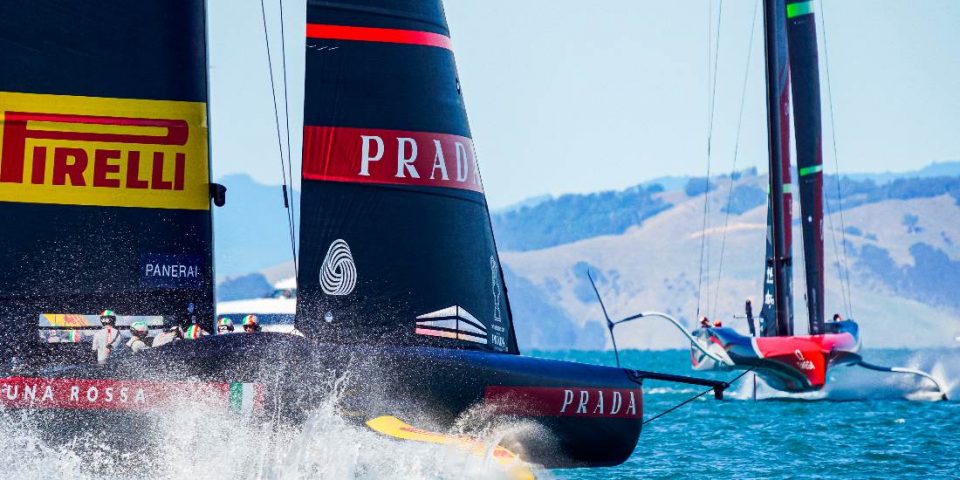 Dimitri Despierres: “We can see that the Kiwis are a bit worried”

A member of  the American Magic design team, French engineer, Dimitri Despierres, who was previously with Oracle Racing and the French challengers, 6e Sens and Areva, has stayed on in Auckland, and is following the Match for the 36th America’s cup. He explained to Tip & Shaft what happened on the first two days with the score at 2-2 between Emirates Team New Zealand and Luna Rossa Prada Pirelli.

2-2 after four matches… is that a surprise for you?
Yes, it’s a surprise, because in general in the Cup, it’s often one-sided with one team having a clear advantage in terms of speed. People in this world, including me, saw analyses and everyone seemed to think that Team New Zealand would find that little extra speed. But after four matches, as we can see from the score, it’s a real competition with two boats that have very similar speeds, with on the one hand an Italian crew losing a bit less on tacks than the Kiwis, while on the other side, the latter have a slight advantage downwind, while upwind, it’s very close. All of that means that the boat that manages to get ahead at the start or at the first cross is able to keep his opponent in check. It’s very hard to overtake in this course, where the wind is in fact not very shifty at the moment remaining fairly stable in strength and direction. That’s partly down to the fact that we are on Race Course E, which is a more stable area than C for example. So yes, we are fairly surprised, but positively, as it’s great that the racing is so close.

What led you to think that Team New Zealand was on paper faster?
Already based on the contests we saw, even if it is true that that was back in December. We also heard from insiders that Team New Zealand was very confident in their package. However, if we talk to Philippe Presti [the French coach for Luna Rossa, editor’s note], he said that the Italians found how to get the speed up after January, not only in terms of sheer performance, but also when carrying out manoeuvres. We can see that they are dealing better with the changes of tack. That was the case in the final of the Prada Cup against Ineos, and we can see it again against Team New Zealand. We maybe didn’t take that into account enough, so our judgment was a bit biased.

“Peter Burling has a boat that reflects his way of sailing”

Can you tell us about the makor differences between the two AC75s?
It’s essentially down to the foils. It’s amazing to see how close the boats are in terms of speed, as they have such different foils, and that is the case whatever the conditions. We thought that Team New Zealand would massacre Prada in moderate conditions and that Prada would have the advantage in lighter conditions, but surprisingly that is not the case. The difference is really down to the surface: for the Kiwis, it is smaller by around 10 to 15%. On paper, it is said that as soon as you start flying, a boat with a smaller surface has less drag, so the difference in speed that we thought would exist between the two boats was largely down to that. But what explains the gains made by the Italians during changes of tack are due to the fact that the bottom of the foil arm, which is not one design [unlike the top], is symmetrical for Prada and asymmetrical for Team New Zealand. The consequence is that there is a moment of drift during a change of tack, which sees the Kiwis lose 8-10 metres on each change of tack. That is what we have seen out on the water in any case. Apart from that the only other major difference is in the way they sail the boat.

What do you mean by that?
Typically, we can see that Peter Burling has a boat that reflects his way of sailing, that is to say sailing a bit lower and faster, while Luna Rossa sails a bit more slowly but higher. That helps them in fact, because on the first tack to the boundary, that enables Prada to change tack and take back control of the race.

The start phase is crucial in these sort of races with boats that are very close. Who has the advantage for the moment in your opinion?
For now, I’d say it would be Prada who has been in a strong position and have been able to find more pressure to get a more favourable position and lead to a situation where the opponent has to move away. The situation is more problematic in the next change of tack. So for the moment, I’d say advantage to the Italians, and seeing just how close the performance of each boat is, Peter really needs to wake up.

How do you feel about the use of two helmsmen on Luna Rossa?
When I saw that, I believed it would lead to a problem of ego. Early on, I thought that the main reason was that they inherited that situation, because Checco (Francesco Bruni) was hired first, Jimmy (Spithill) later on, while Max (Sirena, the head of the team) must have promised the helm to Checco. That is what certainly lead him to come up with this way of working. Today, I wonder, if it was imposed on them or if in the end, they tested that and saw that it worked well. I thought this system would explode when flying with so much pressure on the two helmsmen. We have seen that is not the case. Nobody has really done that so far and I don’t believe there is any instability because of that. So I have to admit that it appears to be working. The drawback is that each helmsman only trained for half the time, but the advantage is that there is no crossing over with the helmsman going from one side to the other, so that means changes of tack are much smoother. Well done to them for trying that and above all in getting it to work well. I think we can all raise our hats to the French coach, Philippe Presti.

What’s the atmosphere like out there, particularly in the NZ camp?
A lot of people and not only the experts expected to see Team New Zealand sail a bit faster, so we can see that the Kiwis are a bit worried. They are wondering whether they will manage to keep the Cup, so this is a time of questioning for them.

What do you think will happen in the next races?
Having been through that in 2013 in San Francisco [Oracle’s 9-8 win after being led 1-8 by Team New Zealand, editor’s note], this situation is very challenging, to the extent that you cannot allow yourself to have the slightest technical problem, especially as there is no joker as in the past. If you have a technical problem, you can ask for the start to be delayed, but the day will not be cancelled. So there is a lot of pressure on the technical teams to ensure that the boats perform well and are reliable. We saw that in the second match today: the Italians had a problem with their foil cant system, which is one design, drawn up by the Kiwis. Te arm would not go down as quickly as they wanted. That has been problems for all the teams throughout the campaign. We can imagine that the Italians are very unhappy. Having said that, they did ask for there to be no possibility of a joker, so that has come back to haunt them.

To finish how about you to give us your forecast?
7-5 to Team New Zealand! However, if we get to 6-6, I’d give the advantage to Luna Rossa, because Team New Zealand has never really felt any pressure, whereas this is an area where Jimmy excels. I saw that in 2013 with Oracle when they were led 8-1. He is simply incredible when the pressure is on, as he remains so calm and collected. When he is at the helm, his pulse is 30 bpm less than Checco. His is 89, in comparison to 120, which is very important.