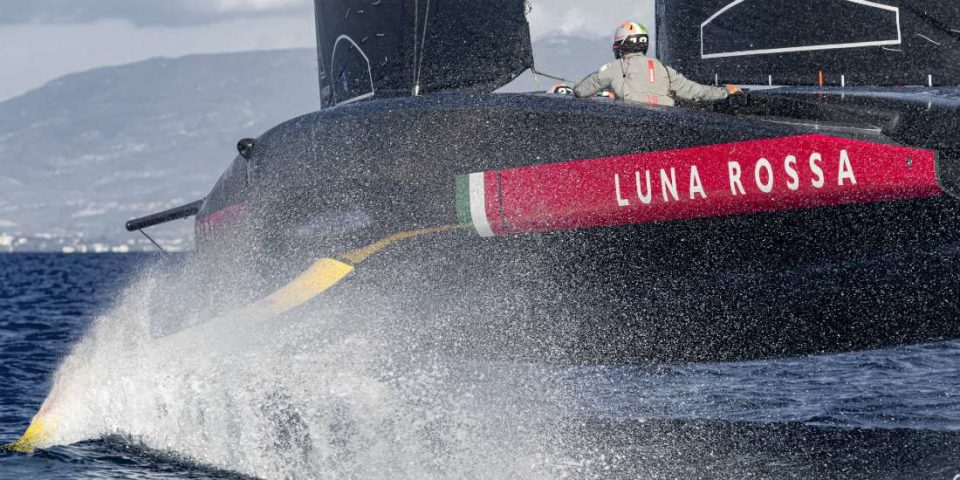 Iain Murray: “The America’s Cup has always been such a design contest”

In April Iain Murray was announced as the Race Director of the 36th America’s Cup. It will be the third time that Murray has done this job. His career in the America’s Cup has included roles as skipper and designer, passing all the way through the spectrum from 12 Metre, IACC and foiling Multihulls. Previously he was also CEO of America’s Cup Race Management but this time the job is more straightforward as Race Director. At the same time Murray is Race Director for SailGP, Performance Director for Australian Sailing and so has been dealing with the effects of the Olympic postponement on the Aussie team. And he remains very active in the Etchells, winning last year’s World Championship in Texas. He took time out last week to speak to Tip & Shaft….

Iain from your perspective what has been the effect of the pandemic on your role with the America’s Cup especially the cancellation of the ACWS events in Cagliari and Portsmouth?
Well today’s teams are very much in the infancy of this class on a very steep learning trajectory so this has probably been the biggest change to any form of sailing and to the events. There are so many things which are new to the America’s Cup, the boats, the type of racing, the equipment. There is a lot of new stuff there which really would have been good to have a test drive with in Cagliari and Portsmouth. But look, the world is very different and very busy at the moment, I am very busy and that is good, I am diversified and that is fun.

What are the specific challenges this time around which are different to previous Cups for you?
The regatta director job has changed since I went into that job in 2010. That was a really big job, the whole establishment of the world series, transport, logistics, establishment of the events’ processes and protocols, chartering ships and there was a big staff. We started off in Cascais in 2011 with 130 odd containers and a really big invention. That has been progressed and fine tuned down through the AC45s and the 72s and then the 45s again and now that has moved on to SailGP. There has been quite an evolution there. And now with AC36 we are back into bigger boats, big crews, very cutting edge designs and facets of sailing which are not proven or amended. This is first generation stuff which I find really interesting. The different theories, the boats, hull shapes, wing sizes, what the people are trying to do, the race course and what the style of boat they are going to need. You do get the feeling everyone is going to come to New Zealand and they are going to be locked and loaded, like America’s Cups of the past where that first moment on that first day is going to be quite revealing. It will be. “Wow, what have we got here!”

That excites you as a sailor and Cup fan, first and foremost?
Yes, for sure. There are so many very smart people out there developing the tools and technology they have got. The America’s Cup has always been such a design contest as much as anything. Thus version of the America’s Cup is not going to disappoint.

Having talked to various sailors from different teams there are very different opinions as to how these races will unfold and what the keys will be. Some talk of a return to engaged match racing, upwind tactics, others are skeptical. What will the shape of the courses be and the racing?
With the America’s Cups 34 and 35 we were on crosswind starts which was largely driven by the World Series to begin with, with the fleet racing and the desire to get the boats equal round the first mark and then let them sort themselves out on the downwind run and not suffer from winners and losers off the start. But in match racing I think what is changed with these foiling boats is there ability to sail upwind now, the effects of other boats is very, very different to what we knew back then. And these boats can sail efficiently when their apparent wind is so far forwards, that traditional match racing covering and pushing back, drawing to laylines and double tacks and stuff like that is different now. The return of the upwind starts match racing. The part out of the start is going to be a vital piece but I don’t think the race will be won or lost coming out of the start. With these boats, like all foiling boats, time on the foil is a key ingredient. And if we have competitors who are sailing high percentages on foiling we will see some great racing. The vagaries of different hull shapes and the aero effects, the ground effects, the splashdown stops, there are a lot of interesting stuff which can happen and which will probably change with the racing style of competitors. The upwind downwind course is the rectangular football field, it is another version of the stadium racing on a simplified course area will be good for people to understand and get in close proximity to the racing. That will work well for the America’s Cup.

So where do you see races being won and lost then, will it be much different to Bermuda?
First and foremost staying out of the water. The start, approaching the start on foils and going upwind doing 20+ knots is going to be important. If you get fouled or pushed or come down off the foils, that will be a big loss, but likewise a manoeuvre which does not go to plan will see big losses. In the lighter breezes these boats will be up and down on and off the foils and if they need to carry downwind sails as opposed to jibs downwind it will be really mixed up.

How do you evaluate teams right now, are you anticipating them being close off the boat?
I have not looked too closely. Nobody has seen the boats up close sailing against each other save maybe Ben and Luna Rossa a little in Sardinia. But you would have to say that the assessment from within the teams is that New Zealand are going to be very good. I think a lot of people I have spoken to say Luna Rossa have done some nice things and everyone is staring at each other and saying ‘that is good on Ben’s boat, that is good on the American boat and some really good ideas on the Kiwis. But until we get the second generation of these boats sailing I think right now it is all too early to say what we are going to get from anyone. We will get to Auckland with the results of all these really smart guys looking at each other and their analysis of what they have learned from their first generation boats put into the second boats. I would be surprised if the second round is much more similar, a lot better and these boats are going to go in the water and be spectacular. From a racing and useable point of view they will be more impressive than the current group of boats.

What have you learned from the successive recent Cups that will serve you well for America’s Cup?
For me in the early days it was all about the big event, massive logistics, big organisation, my role now is making the racing work, preparing a fair and stable platform for the racing, and the control mechanisms around it, whether that is measurement rules, race course, safety they are the things I need to provide to the groups of people and make sure they can perform the way they would like to perform.

What worries you most within that context?
You have to start with safety. With these boats going so fast and having had to deal with Andrew’s (Simpson) unfortunate death in San Francisco that bears heavily on me. I think making sure there are rules, making sure everyone sticks to the rules and is on the same page. Let the winning happen on the water.

The return to Auckland are there specific challenges on the water running racing with these boats?
Auckland is a great place and the desire is to bring the course to the people and to race between Rangitoto off Takapuna and round North Head. We had all the fast boat worlds there the 49ers and the Nacras worlds there last and it is a great piece of racing water, it is tidal and we can get predominantly NE’lies or SW winds which will be a good challenge for these boats. The people of Auckland are sailing enthusiasts and they will support the event like no other place in the world. That will be a great foundation for the teams in doing all this. Not going a long way offshore like they used to, I think Auckland will be a great venue.

You have history in Auckland?
I sailed my 12 footers and 18 footers there and won my first 18 footer championship there, and I did quite a lot of match racing in the 1980s there against the likes of Rod Davis and Chris Dickson and even Russell Coutts. We went over there as kids and sailing in the Skiff classes, Australian sailing heritage and New Zealand heritage are very aligned. We have great camaraderie, friendships and competitions. I have great memories of New Zealand.

And despite all your ‘diversified interests’ you manage to fit in your own racing still!
As you know I have been sailing Etchells in Texas and had success there which was great, and we continue to sail Etchells with a good fleet and good racing. So it is good for me to continue to race. I have been enjoying that. My continuation of the Wild Oats programme has been a great source of enjoyment over the last 15 or 16 years. It rolls on and sailing that 100 footer and being involved in the evolution of that boat is great and it is a very different boat to when it was launched 15 years ago. It is a great team and a great family and a great boat. That all takes up enough of my time.