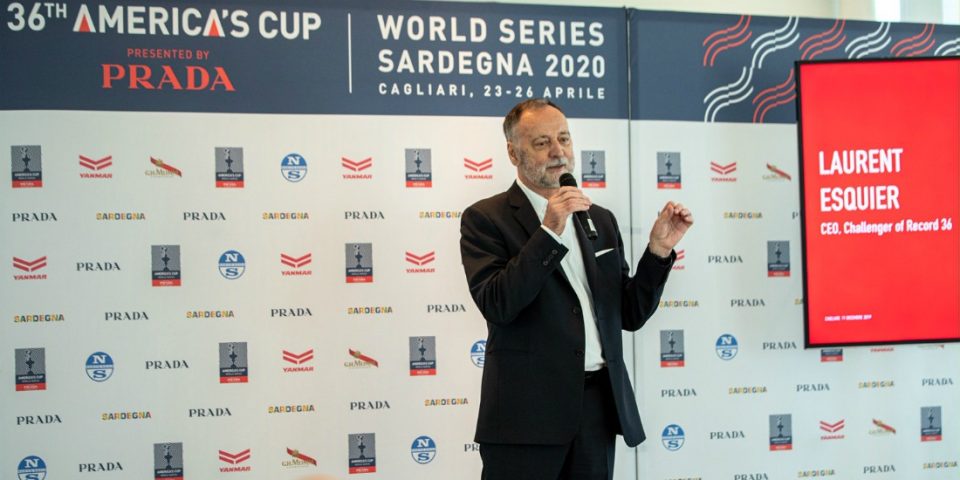 Laurent Esquier: “The Cup is always a question of characters behind”

Although he is little known in France, Laurent Esquier is a well known figure in the rarefied world of the America’s Cup. He has been involved in Cup World almost continuously since his first participation as a sailor in 1974 alongside Baron Bich. Now Esquier is at the helm of COR36 and as such responsible for organising the America’s Cup World Series, for which the 2020 calendar was presented last month – Cagliari in April, Portsmouth in June, Auckland in December – and the Challenger Selection Series (The Prada Cup). These are among the topics he discusses with Tip & Shaft.

How did you first encounter the America’s Cup?
In the winter of 1973 I found myself in Hyères where Baron Bich had his boats which he had previously entrusted to Paul Elvström. Back then I was then a student at the University of Toulon and I started sailing on his various 12 Metres, Then I found myself in the America’s Cup in 1974 and then subsequently in the next two editions with Baron Bich. But let me say if I had been in Lavandou rather than Hyères, I probably would not have had this opportunity, so it was very much a case of ‘right place, right time’.

What happened next?
The America’s Cup is a very small world. Everyone knows each other. After three editions, I was hired as a sailor on the second boat by Dennis Conner’s U.S. team, Stars & Stripes. Then, I did a few months with Yves Pajot, before being hired as coach and manager by the New Zealanders who started in the Cup. With Team New Zealand I did the 1987 edition and the 1988 edition with the big boat in San Diego. Then I was recruited by Raul Gardini as Chief Operating Officer of Il Moro di Venezia. In 1995 I returned to New Zealand on Tag-Heuer with Chris Dickson, before my first experiences with Luna Rossa Prada, as director of operations on the 2000 and 2003 Cups. I then moved to Oracle in 2007 and then Artemis where I left halfway through the 34th Cup in San Francisco [he then officiated as “event manager during this Cup, “Editor’s note]. Since my first Cup, I have only missed two editions, the duel between the two multihulls in Valencia in 2010 and the last one in Bermuda.

How did you find yourself as CEO of COR36 now and what is your role?
Simply because Prada’s boss, Patrizio Bertelli, whom I had worked for already at Luna Rossa for seven years, made the phone call to me. At that moment I had just finished a project to build a skyscraper in the state of New York and so his proposal was well timed. I joined the team at the end of September 2017. As for my missions, the challenger of record has two operational divisions: one, the race team, Luna Rossa, I am not involved with them at all, and the other, COR36, the organisation responsible for selecting the best challenger to face the defender in the Match of the America’s Cup. That means organizing the America’s Cup World Series, and also the Prada Cup between the challengers. In essence that’s the part I’m looking after.

There are only four challengers and still doubts about Stars Stripes. Is that not quite disappointing?
Is it surprising to have only three challengers at the moment? Not really. The America’s Cup is, after all, a little bit of a special event. If we wanted to make it something more regular and structured with continuity over time, we would have to change the Deed of Gift [the “Constitution” of the Cup, Ed.], which would require everyone to agree, which is not easy, if not impossible. That is what makes the appearance of each Cup different. If the event were purely commercial, as the previous title holders wanted it to be, it would become SailGP. Would I have liked to have six challengers? Of course. But given the starting situation, it was quickly realized that this would not be possible, especially because of the technological aspects, the fact that there are only three challengers is partly due to the complexity of the boat.

Have you heard from Stars & Stripes? Can they be in Cagliari in April?
We have no more news than you. The last time we heard from Stars & Stripes, it was at a meeting with them in July in Newport, since absolutely nothing. Will they be in Cagliari with a boat? No. We have no news that they have started building… I can’t tell you what will happen next. That is a question to ask the Royal New Zealand Yacht Squadron who accepted the challenge of Stars Stripes. But there is the problem of his eligibility: are they able to line up with a boat and pay what they owe at the time of the first regatta of the selection of challengers? [The US challenger wrote us after the publication of the interview to make it clear that “Stars+Stripes USA remains committed in the 36th America’s Cup”, Editor’s note]

The America’s Cup World Series was originally scheduled to start in 2019, why the delay?
The main reason is that the construction of the boats was delayed due to the technical complications on foil arms. We thought we would have them in the water six months ago but in fact it was only two months ago. The complication thereafter is one of the transport time, because then you have to get to New Zealand, which is seven weeks of travel.

You say the AC75s are very complicated, are they too complicated?
I don’t know if it’s too much of a jump, because with the America’s Cup, you never know how far you have to jump. That’s what makes it difficult, but also that’s the appeal. In the end though it is true that it’s extremely complicated and expensive and it takes a lot of time.

If we were doing it again should it be less complicated?
In terms of the design rules, probably. But the Cup must not become a one design monohull championship. We  must leave room for development, invention, stepping  into the unknown. Seeing these boats, which are still breathtaking, you cannot but wonder what the next ones will look like. But I think we won’t be able to stay with this class, which is very complex. But where will we go next? It will still depend on the winner’s philosophy. Will it be a slightly more commercial position, one required to attract more teams, countries, sponsors? We’ll see.

Do you think this 36th Cup less focused on this commercial aspect?
Look who’s behind the teams. Yes, there are commercial sponsors, but very few. New Zealand is the government and one or two key figures, Ineos, Luna Rossa and American Magic are backed by passionate owners. That said compared to previous editions, this Cup is much more focused on the media and communication of the product. Unlike previous years, the “race packaged’ product, television and graphics are given free of charge to anyone who wants broadcast it. This means that a large part of my budget, almost two-thirds, is spent on the production of images, which everyone has free access to. Unless you want exclusivity, and then there will be a small fee to pay. If a national channel comes to me and commits to broadcasting the images, it will have access to the production.

What is COR36’s budget to organize all this?
I can’t give it to you, but it’s a little over half a team’s budget [which is more than 100 million euros].

We often hear about tensions between the defender and the Challenger of Record, what sort of relationship do you have?
These are the tensions that are expected. Our job is to get the New Zealand Cup delivered so we are under no illusions about our relationship. The collaboration is tense regarding on the water activity. But it is less so for everything regarding TV production and village.

Finally: France has struggled in recent years to be in the competition and to perform on the Cup, how do you analyze that?
All the talent that is needed is in France, the proof: there are French people in all teams, sailors and especially designers and engineers. What is missing is the initial budget that allows entry and to hire the right team, I think the French way of sponsoring sailing does not fit with this event, the reverse is also true. You have to find a passionate owner. It is always a question of the characters behind the Cup. We see it in Team New Zealand which has been supported for ten years by an Italian [Matteo de Nora]. It was the case before in France with Baron Bich. If you don’t find such a person you need an important group, but again, within the group, a decision maker has to make the choice to say: “I prefer the Cup to golf or Formula 1.”