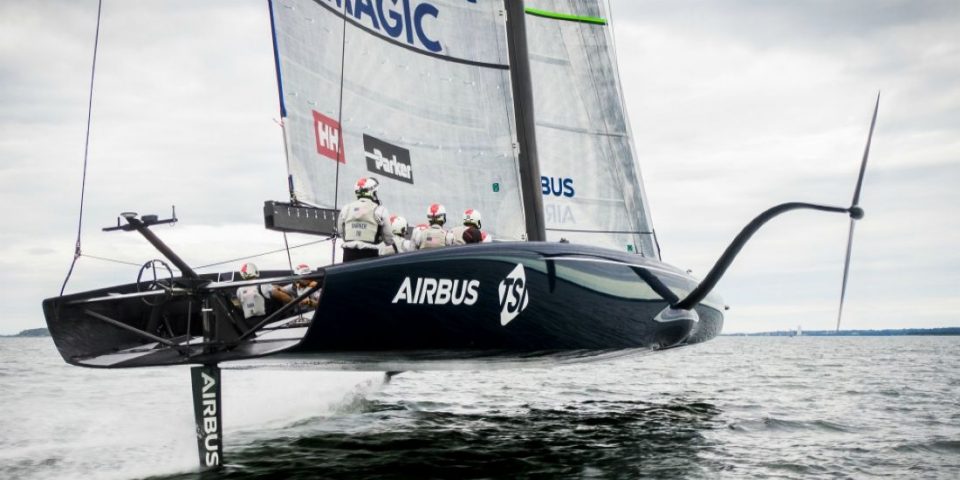 Terry Hutchinson: “It is good to see people coming towards you”

In February, American Magic suppliers Helly Hansen took a very small media group behind the curtain in Pensacola, Florida to see the winter training base of American Magic. Tip & Shaft’s Andi Robertson found skipper and executive director Terry Hutchinson in excellent spirits despite the frustration that these incredibly complex AC75s are spending so much time in the yard and not enough time on the water, but – as he says – it is the same for everyone. The complexity and science create opportunities and American Magic are doing all they can to seize them with both hands.

Terry it is a month and a half or so until the ACWS in Cagliari, how do you evaluate your position now and what do you see in the other teams?
It was interesting to see Luna Rossa is a very science driven boat with incredibly small foils. Team New Zealand is the exact opposite. Team New Zealand has very big foils. It was exciting from a competitor perspective to see Team New Zealand launch with asymmetric foils, a flat one on one side and a anhedral one on the other side, that tells you their science is not 100 percent sure. And it tells you the simulator is not so good and you also would not build a mule. I was excited to see them launch a little boat after that. As I said to our principals if there is something that validates doing that boat it is when a competitor follows you. That was exciting. When I compare to what we are doing the things that makes me nervous are Luna Rossa going with a completely boomless option, they are smart people and you ask yourself ‘why?’. It was not just a guess to end up where we are. The Mule was a pathway for our development. You can see a lot of our strengths and weaknesses, our decision versus their decision. And at the same time the science will tell you if they are right and we are wrong it is five seconds a round on a 35 minute race, so there is not enough in it, certainly you don’t want to give that back, but at the same time if you can do other things that get you the five seconds back with the aero package then you are at least even. Team New Zealand are the most polished, outside of us, on doing laps. But their foils were incredibly big. I am excited to see that fact in the second half of New Zealand’s training they have been on smaller foils, they start coming towards us and it will be interesting to see what Luna Rossa do, but it is good to see people coming towards you.

And INEOS, the Brits?
That one is reasonably random, because I can assure you I walk around pacing saying ‘when are we going sailing, we have to go sailing…’ continually chirping in everyone’s ear. Standing here in 2020 we have over the course of the time since we have launched the boat of 95 potential sailing days we have had 32 sailing days. INEOS have had roughly 135 days or 140 days available and have sailed 15 days. They have moved all their stuff down to Cagliari and then they go there to sail and then go back to England and take ten days off. And now they are at SailGP which I can get to, I understand, it is high speed racing it is race practice, I can get to that place, but we would not invest any of our resource out of designing and building a fast AC75 to go and do that. If it was me….well there is a lot of top down pressure to perform and so we have to keep our eye on the prize.

Run your rule over the top teams…..
Luna Rossa and Team New Zealand are the two teams on top as they really have had the rule for seven months longer because they wrote the rule, they knew what was going into it. Us and INEOS we basically got it in February 18 and by August we were delivering lines after the rule got locked in on June 30th. It is interesting to see the hulls and what six months of design can do for you. If I was to pick a boat out of the three, I love Defiant and she is going to do great work for us, but I can see Luna Rossa is pretty nice, aerodynamically it is very friendly and has very small foils. This competition is going to be won and lost in manoeuvrability and straight line performance. If we were to sail across Pensacola Bay in a straight line I probably would take the Luna Rossa boat but if we were to sail across Pensacola Bay and in 40 seconds have to do a manoeuvre then 100 per cent I would take Defiant every day of the week and twice on Sunday. That is because of the boat’s ability to do certain things and these two things are contradictory. So you have to pick and choose. Now the team which can shed all the drag and get rid of everything will be very hard to beat. But you have to be able to get up on the foil and you have to make sure you can manoeuvre and stay on the foil and remember the wind limit is 6.5kts at the bottom that is a big number (in terms of importance). Knowing that number and Luna Rossa I will bet my life that they’re next set of foils are significantly bigger. It was interesting to see the Team New Zealand capsize, that they did not go into capsize mode. In theory they are supposed to be self righting and they towed the boat up. And when we reached out to them we and said ‘so what happened? Why did you not go into capsize mode?’ They said ‘Well we wanted to see if we could tow the boat up!! I don’t believe them…..(laughs)

How do you quantify a day of sailing?
If we get 50 per cent of sailing out of six hours on the water that is a good day. Our best day here is a 78 miles day inside six miles by two miles. That is a lot of foiling. We had two days in a row that we did over 140 miles, and days like these are incredibly valuable. It is hard to not look over the fence as it is human nature because it is human nature but we just need to maintain confidence in our own development. And in a month and a half we will have an opportunity to measure ourselves, and as you have learned over the last 15 years ad nauseum it is as much about identifying our weaknesses and making them our strengths.

You have a great, longstanding relationship with Dean Barker which has evolved from rival to teammate to rival to teammate, what does he bring to the party in particular? He is your first pick, but what about Paul Goodison and Andrew Campbell, how are they evolving?
Where is hits me most with Dean is like last week were out sailing across the Bay ripping along on port tack and he says ‘stand by to bear off’ and I am standing by my pedestal and the windspeed is at 26 and a half knots and I look over and think ‘this is going to be interesting…’ I am thinking about my ‘exit strategy off the boat, and Dean says ‘bearing away in 3,2,1….’ The bow comes down and we go careening off across the Bay at 55 miles an hour and he is laughing, Andrew (Campbell, flight controller) and Goody (Paul Goodison, main trimmer) is laughing. That is the component of experience, a level you know nothing is going to affect him on the day. Having seen the evolution of his skill set, remember back in 2013 the last race, the whole regatta is on the line, in his specific role they win the start they lead at the bottom and oddly enough the faster boat beat them up the beat. It was nothing to do with him. He did his job. When push comes to shove it is good to have that experience. And it is the same with Goody and Andrew. Dean was a known, Goody and Andrew were the unknowns and they are both in respective roles – Goody is three times Moth World Champion, Gold Medallist and an incredibly talented sailor but what you see developing in his skill set here is way beyond what you ever expected. And Andrew is the same. He is the quiet Saxon, he stands up day in day out flies the boat and is complete flat line. He has such responsibility but takes it on to the nth degree. That side is incredibly exciting.

What is the schedule from now?
We are here in Pensacola for another month before everything is gone. We sail here during the first week of March and then load thing on to the ship in the middle of the month and offload end of March in Cagliari. April is spent in Cagliari culminating with the regatta, we pack up and very quickly go to Portsmouth 4-7 June and then mid June pack up on to the ship to New Zealand where we aim to be sailing on August 1 and from there it is to December 17-20th is the Christmas Cup with some kind of ACWS event on the front side of that to satisfy the protocol. This time next year we will be in the Prada Cup Final. We have been incredibly lucky in terms of timing, even down to this week when we have a pretty big work list that has taken six or seven days to do and we would not have sailed these days anyway as there has not been any wind. In a very simple snapshot when you see things like that happening then you kinda think things are rolling the way you want them to. In that regard we will be the first challengers on the ground in New Zealand. We will set up shop, set up our lives and get into the business end of this regatta.