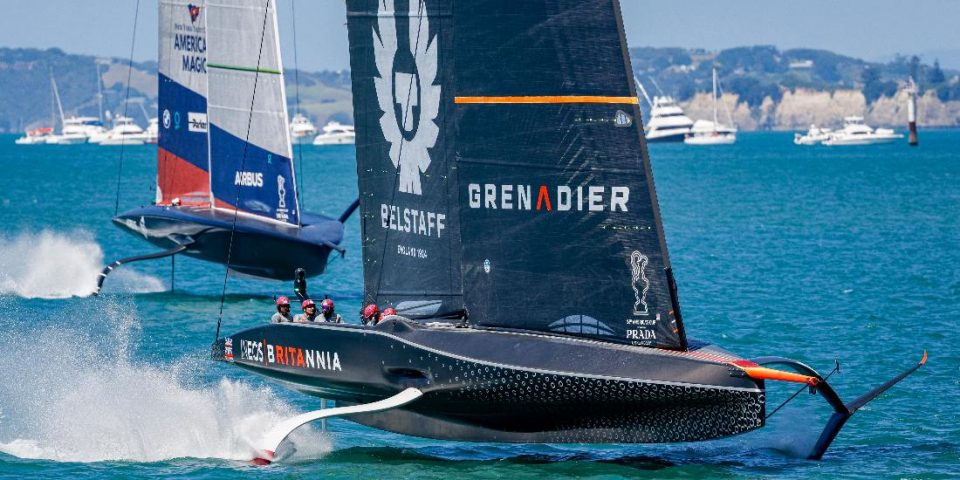 Thierry Fouchier: “The Brits have gone from zeroes to heroes”

At the age of 54, Thierry Fouchier is one of France’s most experienced sailors as far as the America’s Cup is concerned, having taken part six times and after winning with the Americans on BMW Oracle in 2010. A consultant for Canal+ TV for the 36th Cup, the sailor from Marseille told Tip & Shaft about the first days of the Prada Cup.

How do you feel about the start of the Prada Cup?
We were a bit disappointed with the America’s Cup World Series with conditions that were not that great. This time I have to say I am amazed by these boats. If we look back a bit, the last time the Cup took place with monohulls was in Valencia in 2007 with boats weighing 25 tonnes and sailing upwind at 9-10 knots, and downwind at 12-13. Now, we’re looking at boats sailing at 40 knots and getting close to 50 in VMG mode. What really fascinates me too is the audio part that we can hear during the racing and shows us that each team has come up with their own way of working in the dual cockpit system. We can also see the differences in the design of the boats, remembering that everyone started out with a blank sheet of paper. Some have gone for more radical choices than others.

On their last legs in December, the Brits with Ineos Team UK have so far been the most impressive. How do you explain that?
In its December configuration the British boat was not very fast. She sailed quickly in a straight line, but as soon as they needed to carry out manoeuvres or in transition phases, the Brits had lots of problems. They clearly also had a problem of power to take off as soon as the others. Since then, they have been busy and asked themselves the right questions and taken the right decisions. The fact that they have changed the mast and sails, as well as carrying out modifications to the foils has also played its part. Gautier Sergent, who has been working with them on the aerodynamics and sails is someone who can be trusted to come up with the right solutions. You can see the result out on the water. The talent of the British sailors was hidden by the problems with the boat in December, but now they are able to show what they can do, in particular in terms of the tactical and strategic know-how developed by Ben Ainslie and Giles Scott. This huge change is impressive, remembering that they lost 6-0 in December. They have gone from zeroes to heroes.

You spoke about the different ways of doing things aboard. Can you tell us how each crew is organised?
The Italians went for the bold option of having a helmsman on each side – Jimmy Spithill on the starboard tack and Francesco Bruni on the port tack. When the latter is not at the helm, he looks after the flight control. This is a flying choice. They wanted to limit the movement of people. I think that offers advantages when they have a lot of complicated manoeuvres, in particular at the start and in close contact. The problem arises when the two helmsmen do not have the same outlook, but I think that communications between Jimmy, the mainsail trimmer and Francesco Bruni works well with handovers going well. The Americans have a more traditional way of doing things with the helmsman changing sides. On the other hand, their tactician, Terry Hutchinson, does not move and remains at the port winch. What surprised me at the press conference was when he said he could only see 50% of the race. I think that is a bit limiting. It interrupts your strategy, as usually it is the tactician who directs the show. In their system, I think there are too many people involved – 4 or 5 – which is a pity.

What about Ineos Team UK?
As for the Brits, their way of working is closer to the New Zealanders with a helmsman and tactician changing over for each manoeuvre and they know each other well. It looks very smooth and you can feel Ben and Giles trust each other, to the point it feels like they are the same person, which means the standard is very high.

The Americans have capsized, they are now unable to finish the round robins. Is that a big handicap?
In technical and human terms, I think they will get over it, as they are full of talent. On the other hand, we have seen since December on these boats that the development has never been interrupted. From one week to another, you progress in terms of technology with new elements, improvements to the systems, but also out on the water. In this development phase, which is usual in an America’s Cup campaign, they are clearly going to miss that.

Talking about the developments, is it a huge advantage to finish the round robins in front and to qualify directly for the final of the Prada Cup, without having to go through the semi-finals?
Yes, because you can immediately switch to development. All of the challengers have their own test schedule with new parts arriving and new ways of using the systems… The fact that you can do a fortnight of development while tour rivals are stuck in race mode is clearly an advantage. You have the time to do things that will or will not work and therefore you can progress.

What do you think about Emirates Team New Zealand?
In December, they were a notch above the others to the point where they did not have to get off to a good start and could still win races thanks to the speed of their boat. That is only logical, because they came up with the design of the AC75, so had more time to think about things. But the challengers will have made a lot of progress between now and the Cup Match and the fact that they are able to race against each other allows them to check out their choices, which is not as easy when you are sailing alone. The only weakness I can see is at the start. They appear not to be as good. But even if the difference will be smaller than in December, I still think they are that bit faster.

There are only four challenges in this 36th edition, is the Cup becoming inaccessible?
The choice of the new class of boats but also of their size – 75 feet, they are big boats – really limits the accessibility to new teams, it is complicated to set up an America’s Cup campaign on these machines. If the boats had been smaller or more maneuverable, like in 2017, it would have made it possible to have one or two more teams. But that does not relate at all to the Cup life and I think that in the future it will be difficult to find what we experienced in 2007 [11 challengers were present, editor’s note]. Since then, the boats have changed a lot, the budgets have risen exponentially and if you don’t have one or more rich supporters who are passionate about this event, it is complicated to embark on the adventure in the face of challenges that have a Cup culture.

The Kiwis are an exception …
It’s fascinating to see a team like Team New Zealand embody the very essence of the Cup, which means that they have never deviated from this culture of innovation and cutting edge initiatives in terms of design and team, this is their great strength. The British are trying to build this story, since this is their second consecutive appearance; the fact that they managed to switch gears between the America’s Cup World Series and the start of this Prada Cup proves that continuity of the Cup culture pays. It’s a bit like in Formula 1, you have to constantly manage to develop the machine as quickly as possible.

Does this mean that the Cup will, in your opinion, remain a matter of the fortunate elite?
It’s hard to really look forwards like that it will inherently depend on the winner, but yes, I think it’s going to be quite limited. If you go by what the Italians or New Zealanders have said, they plan to stay on this class of boat if they win, which will be bound to limit access to newcomers.