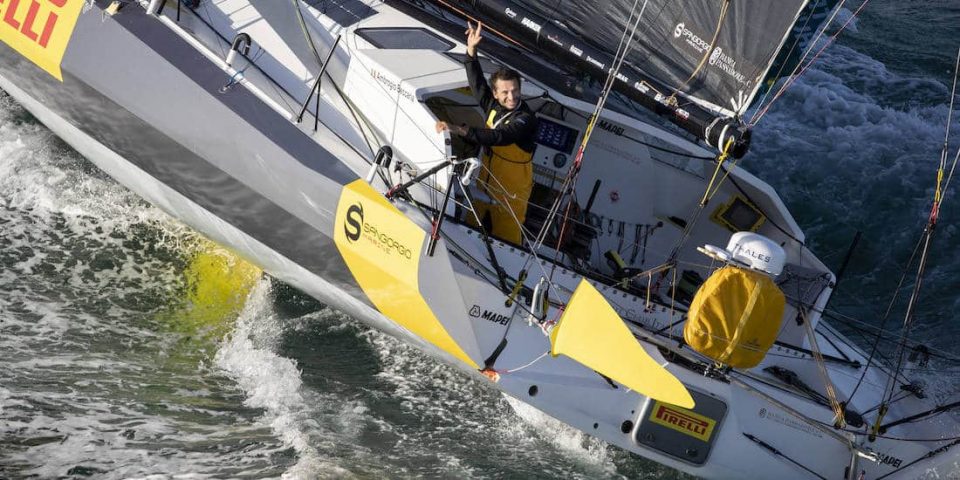 Barely two months after his very first sail on his new Class40, Ambrogio Beccaria finished second in the Route du Rhum-Destination Guadeloupe. Speaking from Colombia, where he is taking a few days off, the Italian skipper of Allagrande Pirelli answered some questions posed by Tip & Shaft.

► Can you tell us how you set up your Class40 project?
Well the origins go quite a way back. I got to know the designer Gianluca Guelfi during the 2017 Mini Transat, so we thought it would be great if he made a boat for me one day, but it was more of a joke. Two years later, I gained a lot of experience and confidence by winning the 2019 Mini Transat (in the series), which made me want to move on up and do my ideal Class40. Gianluca had ideas and concepts which interested me a lot, because he had developed simulation modelling software in hydrodynamics and aerodynamics which made it possible in particular to reproduce the behavior of the boat in waves. When we launched the design, we didn’t have a sponsor at all so it was a bit of a punt, but when Pirelli arrived in December last year, we were well down the road with having a well-developed concept. If we were just starting the modelling at that time, it would have been too late to have the boat for the Route du Rhum. And the yard too was a big gamble because it was brand new too, launched by Edoardo Bianchi, one of Luna Rossa’s former project managers at Persico. We were the first boat built by his new yard, but I trusted Edoardo. I knew to would be good profile, a calling card for him and that he was going to give it everything. In the end, that really was the case, because the boat came out super light. I even thought that we didn’t have enough structure, but in the end, we had no problems during the Route du Rhum even when I pushed it very hard.

► How did you find your partner, Pirelli, a giant in Italy?
Pirelli has always been special to me, because they were the sponsor of Inter Milan at the time of Ronaldo, the team which I support. When I made contact with them, I felt too small, but they were immediately very interested to support me, because they loved their sponsorship with Luna Rossa in the America’s Cup.

► How long is your deal for and what is the budget of your project?
Until mid-2024, the budget is around 400,000 euros per year, which is not massive

► What design choices did you make?
We started from the base of David Raison’s Max 40, a boat capable of going fast in bigger winds and seas, while improving on their weak points. So we wanted a Class40 that works out to the max, with a well-rounded and high bow to get through the waves well, while trying to have a well-balanced boat on the helm, but still with less resistance in medium weather. Compared to the Max 40, the CoG of the hull is further back, we went against the trends in the fleet with the ballasts, that is to say that everyone puts them at the back while we wanted to optimize the righting moment by putting them outboard. We also have a different sail plan, set well back, more typical for windy conditions, a little inversion on the bilge which is very straight, which allows us to go very fast when reaching, and we put on an adjustable bowsprit which allows me to be much more comfortable than the other boats when I use it, whether in light or heavy weather. The nice thing is that in the two months before the start, we didn’t spend a single second optimizing the speed of the boat, it was fast from the start, we only focused on reliability. Which makes me say that the boat has enormous potential, we haven’t yet optimized it for the class rule, we can gain a lot of volume in the bulb, I haven’t touched the sails, I do have some settings that do not work well.

► What was your objective on the Route du Rhum? And did you say to yourself at some point that you could play for the win?
When I was asked the question before the start, I said that I came to win, even though I knew my chances were small.  And deep down, I thought that a top 5 would be very good, because I still had a bit to do. In particular the fact was that I had maneuvered very little on the boat. At first, it wasn’t very complicated, with the J1 or the J2 upwind, but when it came to changing the sails downwind, I wasn’t at all comfortable, I had only done two solo jibes before setting off. So much so that on my first one, I made a huge twist round the forestay, every maneuver I made was a disaster. I even called Simon (Koster) who was next to me to ask him how to jibe! And I had no real crossovers, so I changed my sails by feeling, I felt vulnerable. It was only near the end that I managed to go faster than Corentin (Douguet) because I realized that my boat could take a large spinnaker, where the others were under small spinnaker or medium. By then Yoann (Richomme) was untouchable. Having already raced and won the Route du Rhum gave him a level of confidence, and the real knowledge of the course, which I did not have. It took me longer to play at this level.

► What’s next for you?
The aim is to do a lot of races in 2023, so normally, we will race the Rorc Caribbean 600, the Atlantic Challenge, the Normandy Channel Race, the Sables-Les Açores, the Fastnet and the Jacques Vabre.

► And are you looking further down the line, like to the Vendée Globe?
Right now I haven’t had time to dream bigger than what I have on my hands today, it was already a big achievement to launch this boat for the Route du Rhum. Now, I tell myself we have gained in experience, with a small team that is growing slowly, so yes, one day, I dream of doing the Vendée Globe, why not in 2028? Afterwards, I never discussed it with my partner, I don’t know if it should be with foils or not.

► And what about the links between your project and Luna Rossa, as you have the same sponsor?
Max Sirena (Italian challenge skipper) has always been very open and friendly with me, he had already invited me to come and see the team even before Pirelli joined me. Now, the projects are so different that there is little common ground, but maybe if I have to do an Imoca with foils one day, it could be super interesting to get closer to them, given the enormous experience they have in this field.