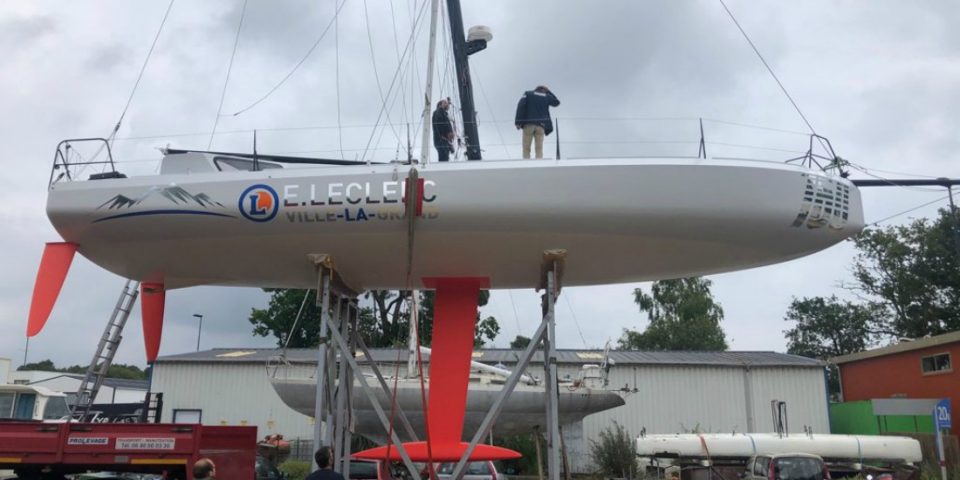 Announcements during the past two weeks have confirmed the construction of four new Class40s, for Antoine Carpentier, Axel Tréhin, Jonas Gerckens and Aurélien Ducroz. This does seem to prove that Class40 continues to attract sailors and sponsoring partners even in times of crisis. More announcements are expected to follow including a new Pogo40 for Jean Galfione. How did these projects happen and how do they shape up. Has the crisis actually had an impact? Tip & Shaft investigated.

After the first two new scows Crédit Mutuel (the David Raison design for Ian Lipinski) and Banque du Léman (Mach 40.4 designed by Sam Manuard for Valentin Gautier and Simon Koster) were launched in 2019 and now, more recently the last week’s launch of the new Mach 40.4 for Olivier Magré (see our article), early June has been busy for the Class40 side with four new boats announced, most with partners and tight budgets.

The next new boat to be launched will be at the end of August, a third Mach 40.4 for Antoine Carpentier which will also be built at JPS in La Trinité-sur-Mer. It will wear the colours of Redman who are almost entirely new to the world of sponsorship of offshore racing. Co-founder of Redman, Matthias Navarro explains their strategy to Tip & Shaft: “First of all, there is the fact that Antoine has been a friend for 30 years, in fact since we were at middle school together. We got involved in a slightly lighter way with the Route du Rhum in 2018. That experience made us want to go further and invest more in a sport which, even if it is very far from our real estate development business it does have values ​​that resonate with the importance to us of low carbon towns and inclusive towns that we embrace. ”

The agreement extends until the end of 2022 and it was signed in February. Redman are the boat owners and provides part of an operating budget (including payments for buying the boat) that the skipper says are around 300,000 euros ex tax. The deal was done just before the Covid-19 really hit France. Since then nothing in the eyes of Matthias Navarro has changed their view on the project: “This long-term adventure has not been brought into question at all because of Covid. This is something that is close to our hearts and on which we really want to go forwards with”.

The same feelings apply to Volvo Belgium, which signed up in January up for five years partnering Belgium’s Jonas Gerckens, for a new David Raison design also to be built at JPS. With a programme leading through to the second edition of the Globe40 in 2025, aligned to an Olympic campaign in the new mixed ocean racing event for the 2024 Paris Olympics.
“With the crisis it was hard not to have doubts, because we know that in this kind of thing it is liable to be rejected very quickly but Volvo told me very quickly that there was nothing to worry about.” Gerckens explains. “As we had to find investors for the boat, which Volvo did not want to own, the project was put on hold. When I learned after the containment that there were a lot of projects ready to be launched I told  investors that if we wanted to not miss part of the 2021 season we had to sign quickly. They understood very quickly and within a week, it was settled.”
The new Max40, expected to launch in April 2021, will cost “between 600,000 and 650,000 euros” according to the former Mini sailor who expects an annual budget of around 400,000 euros, including the amortization of the boat.

Along with partners Crosscall free skier turned ocean racer Aurélien Ducroz revealed on Tuesday that he too was  building a new Class40. The designers and builders have not yet been decided but the boat will also be launched in spring of 2021, all much to the great satisfaction of the freeride skiing champion whose budget is almost identical to that of Jonas Gerckens: “It is the first time that I will have something really long term and that I will be able to do full seasons, whereas so far, it was always race by race and that was hard work. “

Having been with Aurélien Ducroz in skiing since 2016 and then already co-partnering on the last Transat Jacques Vabre (5th place with Louis Duc), how were Crosscall convinced? “Without that great Jacques Vabre adventure I don’t know if we would have signed off this project,” replies Benjamin Schweizer, promotions manager for the mobile phone company. It was a great opportunity to take the first step as a major sponsor of  a boat on an unbeatable project in terms of costs and exposure. ” [the TJV was an investment “below 100,000 euros”, editor’s note] Having the naming rights to the boat was incomparable, the adventure was also very well followed internally and that made us decide to go forwards with this project. ”

As with Gerckens’ Volvo, Crosscall are not the owner of the boat, which Ducroz estimates needs a build budget of “between 700 and 750,000 euros”. Unlike the two previous projects, this one was impacted by the Covid crisis: “There were some changes because we initially planned to do the 2020 season on a chartered boat and so this will not be the case, but the core of the project remains intact, “said Ducroz who will be joined on the Class40 circuit by yet another sailor from the Mini class, Axel Tréhin.

Tréhin was second in the last Mini-Transat in the proto class on a boat he built himself. He has just launched a Max40 (David Raison) for which the project management has been entrusted to JPS. Tréhin the skipper of Project Rescue Ocean will personally be building all that is transferrable to his own facility also in Auray. Funded to the tune of “around 650,000 euros” thanks to the imminent sale of its Mini and to an investor who wishes to remain anonymous, the boat is expected to be finished in late December. But in saying all that he does not yet have a sponsor to fund the operating budget which he estimates at 370,000 euros per year which includes the amortisation of the boat and a PR comms service included.

“But we got into it, it’s because we believe in it. We have time during the build to find the operating budget for the boat at least for in 2021, ideally until the end of 2022. Knowing that what makes me a little different from others is being very involved in the build part, so telling a longer story that starts from a blank page and goes all the way to crossing the Atlantic two handed or solo. ” Tréhin says.

There is a long colourful story behind Jean Galfione which spans more than two decades. In his first sporting life he was a pole vaulter at a very high level (Olympic champion in 1996) and in his second life he is a sailor. This career will now extend at least until 2022 as he tells Tip & Shaft that he will have the first Pogo 40S4 to the newVerdier design, one which sees the return of the Structures yard to the class (see our article). It will be the third 40 footer for  Galfione who has been in the class since 2010.

Galfione says “Even before the last Route du Rhum, we had this new boat project along with my sponsor Marc Le Bras, who runs Serenis Consulting. We waited to see the latest developments on the Transat Jacques Vabre and, from there, we started talking to different designers and yards. I really wanted to work with Structures because they had designed my first boat, but when I contacted them at the very start. They were not really ready to go again with a 40 footer. I then contacted David Raison, but things didn’t happen, But then Erwan (Tymen, technical manager at Structures) called me back, saying that I had inspired them and that they were going to go ahead . ” The build begins in September for a March launch and the chances are this first Pogo 40S4 will not be the only one to be at the start of the next Route du Rhum. “We have presented the project to quite a few people, two or three skippers are quite interested,” confirms Erwan Tymen.

As for the Marc Lombard design office too, things are moving forwards as confirmed by architect Eric Levet: “We are in the process of finalizing a second boat [a first has been designed for the Australian Rupert Henry who wants to race the Globe40 in 2021, editor’s note] which should be built in Brittany for a launch in April 2021. The Covid period did jeopardize the project, we realize that most of the Class40 projects that were under discussion are confirmed , that is good news.”
Jonas Gerckens also notes:” In the current situation, between financial and health crises, it is a breath of fresh air to see so many new projects being launched, new partners arriving or past class alumni renewing their commitment. ”

For the president of the class Halvard Mabire, this resilience of the Class40 is explained by its outstanding accessibility: “In the current period I think interest in sailing and its values ​​will probably increase. And when some people will think about the right place to support an offshore racing project then Class40 is well positioned. I think it is one of the classes that will best withstand the crisis as long as budgets are reasonable. I am quite happy as such that we have resisted the pressure that we had two or three years ago when some wanted us to authorize the foils.” Aurélien Ducroz, who once tried to set up a Vendée Globe project, concludes: “We are far from the millions of euros in investment that other sponsors need to spend. Class40, with limited budgets, opens up the chance to do some beautiful races.”