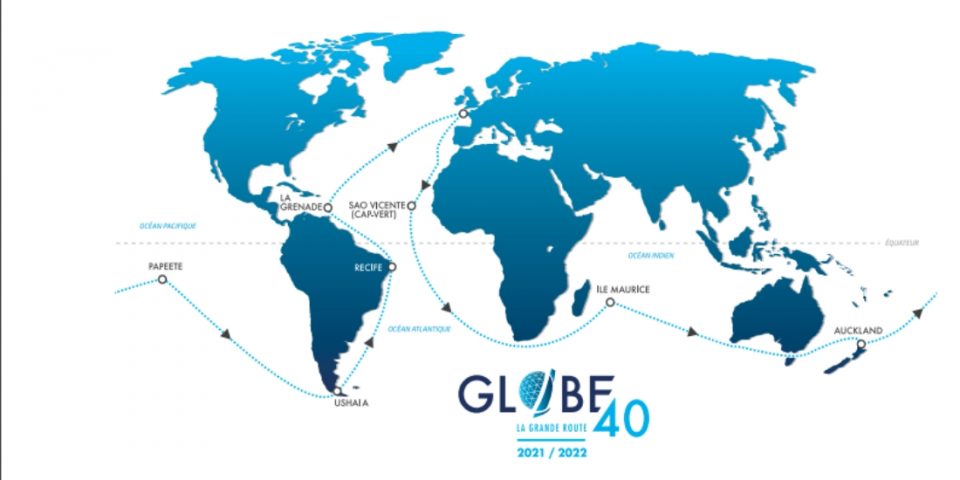 Manfred Ramspacher, the owner of Sirius Events, a company which is best known for running the popular Normandy Channel Race, last week unveiled a new Class40 race around the world, the Globe40. The two handed race with stops is scheduled to start on June 27th 2021 and with eight stages would finish mid-March 2022. Ramspacher tells Tip & Shaft more……

Manfred, where did the idea of this new race come from?
Well it is an idea which has been around for a while [remember the Global Ocean Race won by Boris Herrmann in 2012] but it recently crystallised more and more in my head and really now made so much sense. A couple of years ago I had some reservations but I saw the growing desire for such a race and at the annual meeting of the Class40 a year and half ago it was a topic which the racers debated. And for me, personally, it would be part of my own progression, something interesting to achieve after 20 years in the business. Obviously the Normandy Channel Race means I am in very close contact with Class40 which is still experiencing a remarkable growth. We have had 400 different members over ten years and 200 different skippers from 17 different nationalities. I think that represents some serious longevity and good potential looking towards the Globe40. And a good part of the potential is found outside of France, and there is an audience out there to follow the course who maybe do not yet know much about Class40.

Did you consider other options, like non stop or two stops?
No, for me it was clear that we should not replicate the Vendée Globe but this double-handed format reflects the DNA of Class40 and it should work well. We need a safe course which is a mix of long stages and short legs but with no legs in the south which are too long. I have spoken at length with sailors who have a lot of Southern Ocean experience, like Sidney Gavignet, and these discussions have formed the basis of the event and the organisation, including the possibility of changing skippers. I also want to see something new and fresh in ocean racing, imbued with a real sense of adventure and travel as well as sport. I am influenced by Moitessier. At the age of 15, I was reading La Longue Route and it may be because I read it that I am here, where I am, doing what I do, today.

How has the idea been received by the class?
The Class40 did a survey a month ago that was very encouraging, just measuring the actual interest. More than 100 skippers answered and 75% of them showed a serious interest. And then when I see the reactions on the social media networks since we announced on Tuesday it is clear that the interest is quite strong. I have two projects which are on the verge of committing already, one from the USA and one from Croatia, and I am sure that others will commit soon. It is a good initiative because it is specific to Class 40. It is entirely reasonable in terms of distance and costs.

So have you already had discussions with the possible stopover cities, and in particular a start city?
Yes, right now that is the main topic, the start city which would be also the finish port. And we are in discussions with four or five different cities. I hope that these discussions will prove fruitful and we will be able to make announcements at the Salon Nautic

And with your attachment, your connections to Normandy it would be a great place to start from?
Currently there is nowhere which is considered to have any advantage over anywhere else. Normandy will of course be included in our discussions because I have been involved here for a long time, but Normandy is not the only place in France and there are many beautiful, ideal European cities and towns and so let us see what propositions we can have.

How did you settle on the dates for the Globe40 race will necessarily clash with the Transat Jacques Vabre and certain other races?
Well I did a weather study with Great Circle, especially looking at the hurricane season in the South Pacific and really you have to be out of that area in December so we assembled the course backwards from there. You can’t start in September-October. And as for other events at the end of that year there is a lot on like the Mini Transat, The Ocean Race and The Ultime crewed round the world race. And I think the impact on the Jacques Vabre will be minimal because we are looking at a much broader, different target group than the traditional French Class40 races.

So, really, you are looking at a truly international entry?
I am sure. I think, like 50% will come from the United States, from Northern Europe, from Italy, from Spain. Why not Australians and  New Zealanders, people from all over the world who are inspired by the human adventure aspect of racing around the world. So many people have a dream of racing to Polynesia or Ushuaia, to conquer the great Capes, Cape of Good Hope and Cape Horn. I want it to be a real, quality race attracting names, top professionals with a sporting intensity but also with amateurs, adventurers sharing their love of being on the ocean who already have some races under their belts. They are often company bosses or entrepreneurs of a certain age who want to cut themselves free for a while and do part of the course.

Why set the minimum number of entries at 15?
Because I think we have to achieve a level of sporting credibility before we even start. I was at the start of the Global Ocean Race in Palma in 2012 and, yes, it was the start of a great adventure but with just six boats it was not really a spectacle. We need to offer some kind of guarantee of a level of the sport to attract entries, to interest partners and communities. That is dependent on a minimum number of boats. When I look at the success of the Golden Globe Race which proved to be quite extreme, I think to myself that we should be able to have 20 to 30 boats at the start.

Your announcement suggests a package of technical assistance will be available?
Well it is not really defined yet but for example I have a good link with the V1D2 yard when we organise the Normandy Channel Race in Caen. The boss Marc Lefebvre is not only a Class40 expert, but he also sailed several BOC Challenges, he has experience of round the world logistics. So the thought is that teams will not really have then means to have full technical support. So this is likely to take the form of spares and experts and yards who we know and who we can contract in each city. We will be very proactive on this to ensure the maximum number of boats finish and restart. We will also build accommodation/catering packages which will ensure we can remain a group, a travelling community all the way round.

Let us talk money..how much will it cost for a crew to do the Globe40?
The entry fee will be 15 000 euros ex tax which I think is reasonable for nine months. And the overall cost will depend if you are a boat owner or chartering. What do you want to, or what can you spend on sails and equipment? Will you pay yourself?  But I would like to think an amateur who has his own boat would go around for €50,000-100,000. I reckon that is a fairly reasonable budget.

And what do you think the budget for the whole event would be?
We are aiming for a budget between 1.5 and 2 million euros ex tax. And that would be based on four funding sources, the start and finish city, the other stopovers, the entry fees and private partnerships. The keys today are the start and finish city and being able to generate the level of sporting intensity and interest quick enough to turn interest in to entries.

International thoughts on the Globe40
Sam Goodchild: “I like the idea, they’ve tackled the biggest problem of the old race which was it was too extreme for too long in little boats. My concern is are there enough teams and funding to have a good turn out for the race. It’ll be a very big time and financial investment for sponsors and owners alike – compared to the Transat Jacques Vabre which is the other option.”
Phil Sharp: “The Class40 has huge opportunity to grow internationally, particularly with its reach, and the Globe40 race could really help give it the platform to do this.  It will no doubt attract new skippers and teams looking to go one step further and embark on the adventure of a lifetime, and surely those skippers won’t be put off by several stopovers in complete paradise! I think it is a great concept that has evidently been well thought out, and also allows sailors the opportunity to also discover incredible parts of the world, not just to race around it. It would be nice though to see the race start of finish in a place other that France… London would be a good shout!”
Merf Owen: “I think it’s the right race at the right time and Manfred is a great organiser. Obviously the race must commercially start and finish in France. Also I like the idea of the race going to more Franco-centric ex colonies rather than the usual Anglo-Saxon stops such as Cape Town. Ushuaia would be interesting. I will be there this year.  However I feel looking at the history of the BOC, where a high % of its Corinthian entrants came from…it probably would be a mistake not to include an American port such as Charleston (which now holds the biggest race meeting in the US and hosts the start of the Atlantic Cup). The US contains nearly 50% of the world’s sailboats and so if for no other reason, Class40 itself as a group would be missing out on a huge opportunity to market itself.”