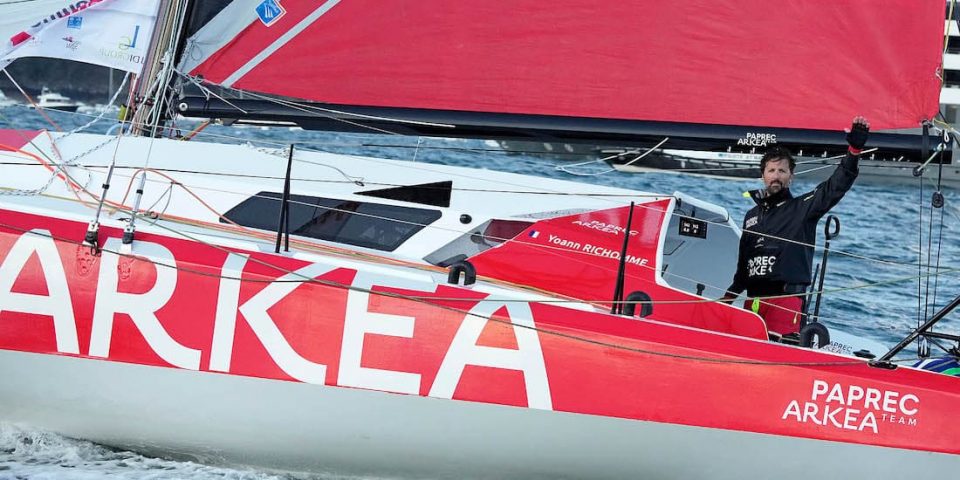 Yoann Richomme: “the intensity of the racing in Class40 is very close to what you see in Figaro”

On Friday morning Yoann Richomme took the second place in the Lamotte Malouine 40 24-hour race, an event which mustered 31 Class40s in Saint-Malo and runs until Sunday. The 2018 Class40 Route du Rhum winner was just over two minutes behind the winner, Corentin Douguet. Two hours after his arrival, Tip & Shaft spoke with the skipper of Paprec Arkéa, who is very busy, between preparing for the Route du Rhum-Destination Guadeloupe and building his new Imoca.
► How was this 24 hour race?
It was a really intense format, with four course sections in 24 hours, including one, upwind, of more than 12 hours. This tack was a little complicated for me, I had a little trouble finding the right gears, Corentin (Douguet) did this section better, but I saw a lot of things in terms of the rig and sail settings that I can improve. Afterwards, it was very strategic, we constantly changed sails, with one gybe under spinnaker, one under gennaker and again under spinnaker to finish. We maneuvered a lot with a rough sea in which the boats were burying the bows, it was a real challenge to make the boat work and to prepare for the next maneuver. In the end, it wasn’t so ‘Rhum’, in the sense that I think we did as many maneuvers in one day as on the whole Route du Rhum!

► What was the difference in the standings?
It was a good tussle with five or six boats, the final ranking was mainly sorted on the reaching leg: the Lift 2 [Lombard design which he has, as has winner Corentin Douguet, editor’s note] has a real advantage in these conditions, we were going much faster, almost a knot, it hurt the others! As for the win, it was decided on the upwind leg, Corentin took a 2-3 mile lead, he played quite well, because even if I got a little closer at the end, I was far enough from being able to overtake him.

► What can you learn from this race for the Rhum?
If we look at the results from this 24-hour race, I think that the first 5-6 sailors, plus Xavier Macaire who is not here, will be part of the group that will fight at the front on the Rhum, the winner is undoubtedly among this group. Afterwards, it will be hard to say who will come out on top with the best game because the boats are all really different. If we’re only going downwind, we’re doing as well as the others, but we won’t necessarily have the advantage, if there’s strong upwind, over 18 knots, and reaching, it’ll clearly be more favorable for us. Today, we see that the Raison plans, with Ian Lipinski, Axel Tréhin, are quite versatile; the Mach 4, with Antoine Carpentier in particular, are also in the game; for the Mach 5, a guy like Luke (Berry) sails it very well and has a lot of experience, but he hasn’t yet managed to show us better potential than the Mach 4.

“The boats are tough enough”

► You raced in the Route du Rhum on a Lift 1, the precursor of the scows, is this new generation very different? And do you feel that compared to 2018, the level of play has increased?
Yes, the boats have become very powerful, they’re really taking off: all last night, we were going at 16 knots in 16 knots of wind on a reach, as soon as there were 20 knots, we went up to 18-19, that’s still great to sail at these speeds on such basic boats. They hey are quite hard boats, the movements are very hard due to the very flat surfaces below, there is no cushioning, the slightest wave is transmitted to the boat, the slightest jump off a wave slams, shaking you on the spot, it’s quite tiring. And the loads are starting to get heavy, there is a real physical efforts if you want to keep up with the leaders. As for the level of play, yes, it has clearly increased! The intensity of the racing is very close to what you see in Figaro, it’s a real challenge to beat the 5-6 skippers who sail really well and are starting to know their boat very well.

► Why the choice to do the Route du Rhum while you are leading an Imoca project?
It was approved last December with my partners, but I had it in mind for longer. Firstly because it remains a light project on the scale of the Imoca, then because it creates a real positive dynamic internally, we don’t just build a boat. Finally, because it keeps me sharp and it allows me to work on subjects that I will also have on the Imoca, such as, for example, the Madintec pilot, which no one in the team had used up to now. Installing it, configuring it and testing it in the Rhum is awesome in terms of time and experience saved.

► You are back, then, to defend the Route du Rhum in Class40, can we say that your victory four years ago was decisive in terms of everything going on now?
Yes, the win gave me a lot of things. I was keen to get out of the Figaro, it allowed me to present myself in another capacity to the world of sailing: I set up a project, managed a construction, it was a hell of a challenge to take up, I I’ve made a lot of progress. And it probably opened doors for me in the sense that it complemented my victory in the Solitaire in 2016 [he will do it again in 2019, Ed], people started to look at me differently.

“I think we’ll be closer
to Malizia than to Charal”

► Now let’s talk about your Imoca, can you tell us where the build is up to?
It is still in the mould, but almost totally compartmentalized, this will be the case by the end of the month, we will take her out the mould mid-October, then we will be ready to do the deck. The foil wells are on, all the pieces are produced or almost, the foils are not far from being finished, the rudders are almost finished, the whole puzzle is starting to come together. The site is a real anthill: the other day, there were 25 Multiplast technicians in the boat, plus ours who are 5 or 6, it’s full on! The launch is still scheduled for January 2023, it allows me to be totally relieved mentally of this project, even if I try to give it time – what, between site visits and meetings from the design office – I stay on top of it all. It’s exciting, a bit overwhelming to manage the two projects together, but so interesting!

► What will this Antoine Koch-Finot Conq plan look like compared to boats made from new moulds, such as the VPLP (Malizia Seaxplorer) or the Manuard design by Jérémie Beyou (Charal)?
We are working so much on all aspects that it will be hard to say that we will look like the others, but I think we will be closer to Malizia than to Charal, we are on to something that seems to me more tolerant, with fewer flat surfaces in front when it slams. And there are a lot of very neat little details, especially the aero, I think we will really present a very successful boat.

► Why did you choose Antoine Koch and Fino-Conq, for whom this is the first Imoca with foils?
We spoke with other architects, we found that none really offered us clear ideas, many said they wanted to make a boat for us, but as I hadn’t done an Imoca with foils, I had no real concrete idea. With Antoine and his whole team, we really appreciated their approach that from the start, they really opened their book to us to tell us where they were at, we liked their lines of research, their way of organizing themselves, Antoine took great care on the learning side to get everyone to the same level of knowledge. It clicked immediately, I found their approach reassuring. Admittedly, there is some risk taking, because it is his first boat, but he is no novice, he has worked on quite a few of projects [Gitana 17, LinkedOut], and he is accompanied by an experienced team with Pascal Conq, David de Prémorel…

“I can do whatever
I like in the project”

► Do you intend to rely on a skipper with Imoca experience to learn how to use your boat more quickly?

Yes, we have clearly moved in that direction, we are in discussion with someone to do the whole start of the season and, if you like, the Jacques Vabre. The objective is to avoid re-learning stuff, so relying on a skipper who brings his know-how from the Imoca, but also from the Vendée Globe, with advice more related to the Deep South, to long-term sailing, we may soon find someone to play that role…

► Finally, is this Imoca project the project of your dreams?
Yes, because I manage to do everything I like in a project, namely a little team management, organization, in addition to the sporting side. All with the actual means to achieve great things and a team that has huge motivation. They are extremely dedicated. It’s even almost embarrassing, sometimes we sometimes close the WhatsApp group at 2300hts because otherwise it never stops! So it’s great to experience such a project because it doesn’t happen very often.