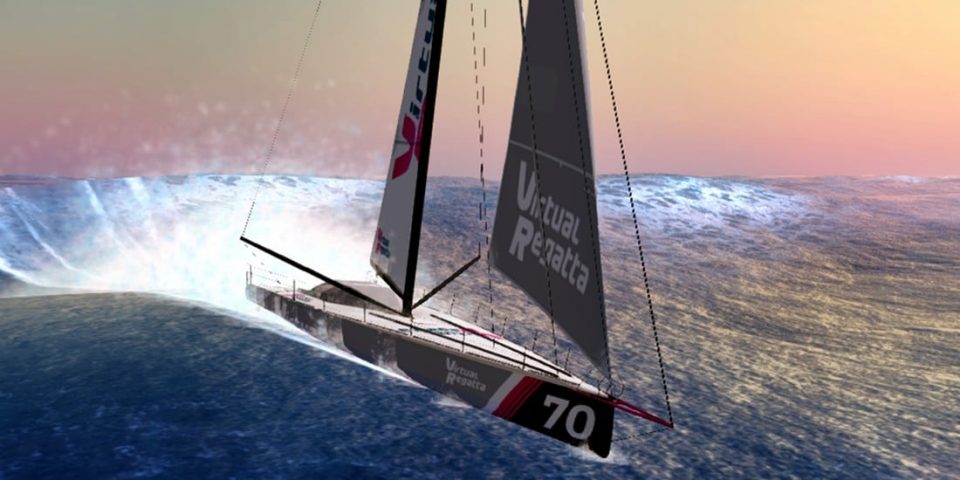 2020, a record year for Virtual Regatta

With almost a million virtual boats entered – more than double the number that competed four years ago – the virtual Vendée Globe is a huge success for Virtual Regatta which had also took the opportunity presented by the first confinement between March and May to enhance its development. Tip & Shaft looks at the success story that the publisher of sailing games obviously is.

The Covid-19 pandemic has badly affected the economy all around the world but there are certain certain sectors of activity that have experience strong growth. That is the case with eSport and particularly eSailing as shown by the main player in the market, Virtual Regatta.

Leading the company that he founded in 2006, Philippe Guigné confirms: “The first lockdown had a very clear impact on our activity, especially on the inshore game: we have almost multiplied our audience by 20 with up to 200,000 players per month compared to barely 20 000 before. The period also allowed us to roll out projects that we didn’t expect to see happening for a year or two. Many organizers of canceled or postponed events turned to us to replace them with a digital regatta.” This was the case of the Solo Maître CoQ, Spi Ouest-France (38,000 players on the inshore game in April), the Beneteau Cup. And to meet demand in March Virtual Regatta launched The Great Escape, a 100% digital transatlantic, which attracted 150,000 players.”

And internationally, the online game publisher saw the activity grow significantly with many cancelled events developing their virtual equivalent. That includes the 100% digital events organized in partnership with World Sailing. “We went from 6 to 20 national federations which participated in the eSailing world championship, including some have gone all out, such as the RYA, which won the Nations Cup, which was originally supposed to come in year later”, continues Philippe Guigné.

They have already established contacts with the IOC with a view to the Tokyo Games: “I cannot say more, but we are at the contract signing stage. This is proof that they are interested in e-sailing, they even asked us to allow them to broadcast the Nations Cup final on their Olympic channels.”

If the first lockdown prompted the inshore regattas games to take off in unexpected proportions (today they represent around 15% of the company’s overall turnover), the second lockdown, since the end of October in France, contributed to the success of the virtual Vendée Globe. There are just over 958,000 boats registered as against 450,000 in 2016. “There was certainly an effect, but 15 days before the start before confinement therefore, we already had three times the number of registered entrants as we had at the same time in 2016 ”, explains Guigné.

But how many subscribe to the full pack paid option (€ 29.99) and VIP subscriptions? “I never communicate these figures. What I can just say, is that growth is proportionately more significant than that of the number of players, the ratio really has increased”, replies the boss of Virtual Regatta who adds that these paid options add up to 80% of offshore racing sales to date.

And there is more income coming from advertising: Corum is sponsoring the 3D screen, B&G and Ulysse Nardin the compass and the stopwatch. Daily intermediate panels – sold for 6,000 euros – are also offered to advertisers. For two years, private races are also marketed by Evolution Media for boat or races sponsors, but also for other companies (Click & Boat, France Info, L’Equipe…). They are given the right to 100 full packs, to a proper ranking, to a game branded in the colors of the company and to various à la carte activations. About thirty private races were sold for this Vendée Globe, for budgets from 6,000 to 10,000 euros excluding tax (add 2,000 euros of technical costs).

Bureau Vallée, the sponsors of Louis Burton, have subscribed for the first time to have a private race. “We started the race at the last moment ; two days later, at the start we had 1,300 players, it was quite impressive” comments the digital and comms director Adrien Peyroles. “Today we see a real interaction between Louis’ Vendée Globe and our virtual players and that confirms that eSport is becoming a real sport today.” So that Bureau Vallée has chosen to sponsor a team of gamers named INC, at the top of the inter-team ranking this Friday.

The same is true for Corum L’Epargne. Nicolas Troussel’s sponsor has also brought together the virtual and real world. “For the 2019 Jacques Vabre, we signed up to a private race and that worked out well in the company. For the Vendée Globe, as we were trying to develop our reputation, we decided to do a lot offering 200 prize packs, sponsoring the 3D version, but also a pro team of gamers,” confirmed the head of communications and sponsoring, Matthieu Masquelier.

The pro team he was talking about, MCES, was launched back in late 2018 in Marseille. In particular they focus on blockbusters such as League of Legends and Fortnite. For the first time this year, they have entered the world of eSailing. Their founder and president, Romain Sombret, explains: “There are several of us in Marseille in our forties who are interested in sailing. It is here that the sailing events for the 2024 Olympics will be held and some of our investors encouraged us to look at this game. We therefore recently took part in the World eSailing championship final (5th and 9th place), but the Vendée Globe is our first offshore competition.”

Unlike the big eSport games, there is no prize money. Sponsorship is what counts. “Virtual Regatta offers good visibility to sponsors whom we don’t see in other games. That is why we signed up with Corum who would never have joined us for Fortnite,” added Romain Sombrier. The head of MCES believes that 2020 is a turning point for eSport: “Our turnover is expected to go from 600,000-700,000 euros to 1.2-1.3 million over the year. The world is turning to gaming.”

A new phenomenon for Virtual Regatta, this form of sponsorship also concerns pro sailors, some of whom have found partners specifically for the virtual Vendée Globe. That is the case in particular for Loïck Peyron and the Figaro racer, Achille Nebout. “I used to play Virtual Regatta with the status of a certified skipper, but was spotted by the president of Amarris Group, who was interested in sailing sponsorships. He understood when he saw the example of Loïck Peyron that the virtual Vendée Globe could be a great opportunity to step into this field. He contacted me on Linkedin and I got in touch with another of my partners, Primeo Energie. They joined up to sponsor my virtual Vendée Globe.” While waiting to do this for real, Achille Nebout is meeting up with the head of Amarris on Monday to discuss what comes next.

The model may win over other sailors and sponsors and enable Virtual Regatta to find additional revenue, as the editor is selling this offer (€ 5 000) called Your Sponsor for the Vendée Globe in exchange for other advantages: the possibility of being a co-namer alongside the skipper, the decoration aboard the boats in the colours of the firm and the certification of the skipper throughout the Vendée Globe, offering a lot of promotion.

Very present in the media, Virtual Regatta, which has gone from 10 to 15 employees, is looking forward to strong growth in 2020. “We had a turnover of less than 1.5 million euros last year,” announced Philippe Guigné. “It will be more than double that this year.”