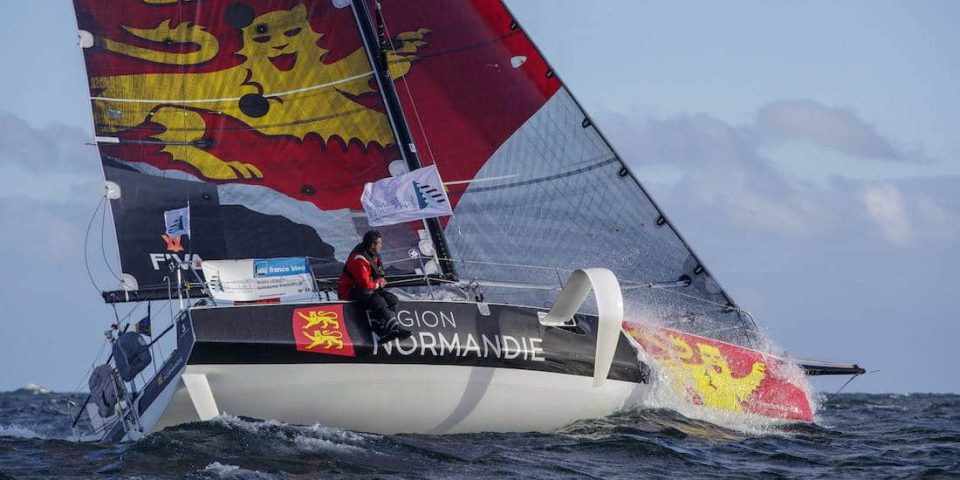 Alexis Loison: “I am the Figaro’s biggest fan”

Approaching 37 years old, Alexis Loison will this summer compete in his 16th consecutive La Solitaire du Figaro. That will make him the most experienced sailor on the start line. His Solitaire programme this year is prepared differently twith a project to pass his knowledge and Figaro Beneteau 3 Région Normandie to French former 470 European and Youth World Champion and Tour Voile winner Guillaume Pirouelle. Before setting this week Solo Guy Cotten, the sailor from Cherbourg – who has class wins in all the major crewed offshore races The Fastnet, Middle Sea Race and the Sydney Hobart –  talks about his season, his ambitions and his future.

Alexis since the start of the season you have mainly sailed double-handed, what do you think of your results?
They are satisfactory. Sailing with Guillaume has worked well, since we are regularly around about 5th place [6th in the Sardinha Cup, 5th in the Transat Concarneau-Saint-Barth and in the Tour de Bretagne, Editor’s note]. But bear in mind that that three months ago he had never spent a night at sea and had hardly touched boats of this type, he comes from the dinghy and the Diam 24. I spotted him a few years ago, he had come to the Tour de France in M34, he had never helmed a big boat in his life and he was straight away matching the leaders of the class. Now he has adapted very quickly to the Figaro and ultimately we have good mix of our two experiences, this is contact racing on the open sea and we were immediately quite complementary. And as he is an engineer by training he also has a fairly Cartesian approach which matches mine well. He is a very rigorous person but also he is very curious, he asks himself a lot of questions, always tries to understand, suggests adjustments. He has brought me a new outlook, a breath of fresh air and some youth. And he is a nice lad.

How did you end up in this transmission project?
I am fully behind this proposal. Normally my contract was due to end last year and I just had to be replaced. It turns out that the region was a little bit worried about handing the boat over to a young rookie in the Figaro. You have to understand that the first year in Figaro is often extremely hard to ope with because everything is new and you are not just sailing. You have to manage the whole project it involves the athlete, but also the preparateur and coaching, equipment ordering, suppliers, partners, communication. All in all this is a pretty demanding schedule. It is a lot for a first year. So I suggested that the region I accompany Guillaume for a year so that he has a common linke to next year. They backed the project and they will not worry about him in 2022, Guillaume will be able to race the Figaro and manage his project. And though he’ll be a rookie on La Solitaire, he’ll already have a double-handed Transat, a Sardinha Cup and a Tour de Bretagne under his belt as well as the pre seasons and so he’ll be a rookie to watch!

“The consecutive run will end at 16”

Upcoming now it is time for the second half of the season and you go back to solo mode. You will do your 16th La Solitaire in a row, only two sailors have done more consecutively, Jean-Paul Mouren (25) and Gildas Morvan (20), what does all this mean to you?
Precisely. We asked ourselves that question recently during the Tour de Bretagne! What inspires me is that I am the number one fan of this race and always have been. When I was 10, I told my parents I wanted to do it, I read all the Solitaire stories, I am still able to tell you all the past winners! One day, I had the opportunity to do it, and since then I have always been lucky to have partners who support me. There were some very hard years with very little money, but I stuck it out, because this is the circuit where I completely challenge and find the real me. With boats on a level playing field, you can’t make any excuses, it forces you to constantly question yourself, the deal is all about using the same tool better than others. And I’m having a blast in this three to four-days-at-sea format.

Don’t you feel fatigued by it all, feeling the wear and tear?
No, especially since for a long time I have not had much money. I did not do full seasons, my first Transat AG2R was really only 2016, I had already been on the circuit for ten years. And the new boat also helped, I had been around the Figaro 2 a lot and so having a new toy rekindled my interest. But for sure the the back-to-back run will end at 16: while there’s no fatigue, I am not fed up of it I think I need to go and try to do something else next year. So I won’t be doing La Solitaire. However, I will not stop at 16 participations.

After 15 participations, you have not yet finished on the overall podium, what are you missing?
Many times I have been on the podium halfway through the race but then was really bad at the end. Two years ago, I could have played for the podium, but in the end, I preferred to attack on the last stage, telling myself that there was an opportunity to win and overhaul Yoann (Richomme) and that did not work. I have no doubt been a little too risky, too punchy at times, but it comes down to so many different things on La Solitaire it is always hard to know what was missing. Maybe my slightly different preparation will pay off this year, but what I’ve learned in fifteen participations is that you shouldn’t plan too much, not look too much at the results from before the race, the pre-season. And always when you look down the list there is almost half the fleet that can win the Solitaire, I think I’m part of it.

“The new Fastnet course will open the game quite a bit“

Are you going to participate in the Fastnet again?
Yes, with Guillaume in a JPK 1030. Jean-Pierre (Kelbert, owner of the JPK yard) lends me Léon, the boat with which we won in doubles and in IRC3 last time. In the category we are aiming for, the doubles, I know that there are quite a few good English crews who are well prepared for this race such as Dee Caffari (with James Harayda), Henry Bomby (with Shirley Robertson). I have won it four out of five times double handed, I was told it is a  record, if I could do it again I wouldn’t mind. It’s not long before Solitaire, but it’s going to keep me from thinking about the race and my mental coach told me to take this as a warm up, so I’m going to go warm up on the Fastnet.

The Fastnet Race of course finishes in your home port of Cherbourg, what is the difference compared to a finish in Plymouth?
I’ve heard a lot of people moaning that the Fastnet is becoming a ‘level crossing race’ (ie that it has many tidal gates which compress and open the fleet), but I have always considered it to be the quintessential level crossing race, I don’t know how many there are. And so in this race, the Raz Blanchard will be just one more. On the other hand, it still adds another hundred miles and perhaps some more clear-cut options between the Fastnet and Cherbourg. Before, we passed the Scilly Isles and we put the left turn signal on and went from there. Now there will be more choice between going along the southern English coasts, the north Brittany coasts or passing in the middle, that will open the game quite a bit.

Will we also see you on the Transat Jacques Vabre?
Yes, in Class40 with Nicolas Jossier under the colors of the Manche department. I am super happy, because we are very good friends and we have a good boat which was the winner of the last Route du Rhum with Yoann Richomme. There is an incredible line-up in this series, we expect a great fight against all the new scows which look quite incredible, but we saw in the last Vendée Globe that they were not necessarily the latest machines that were winning, so why not?

And next year?
Not so clear! I obviously have a desire to do the Vendée Globe, I might as well get more into this Class40 which is developing a lot. Otherwise, I am open to any proposal, I have worn a lot of different colours in the Figaro, I would use my experience in other areas and I am sure there will be some nice sailing opportunities, look what Antho (Anthony Marchand) is doing in Ultim (on Actual): now he has said loud and clear that he wanted to do the Vendée Globe but he cannot find partners for the moment, he sails elsewhere, it allows him to get himself better known. But so far, I haven’t started up anything, already because I’ve been on the water a lot, then, because I want to stay focused on the Solitaire.