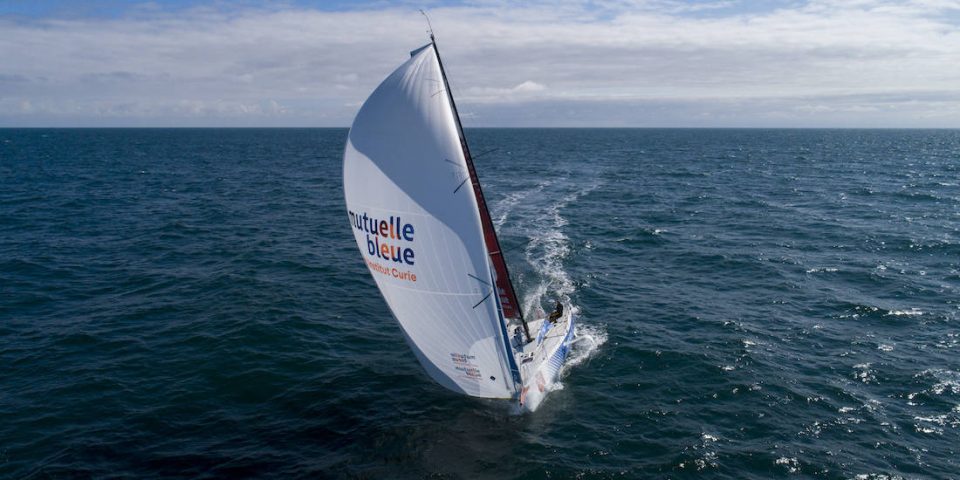 Corentin Horeau: “I was convinced that i would return in figaro”

Back in the Figaro circuit this year after a four year absence, Corentin Horeau finished in fourth place in the first leg of the Solitaire du Figaro between Saint-Nazaire and Lorient, 1hr 36 mins and 23 secs after the winner, Xavier Macaire. 24 hours after the finish, the skipper of Mutuelle Bleue pour l’Institut Curie, now 31 years old, looks back at the start of his career and tells about what he has achieved.

How do you feel about the first leg of the Solitaire du Figaro?

At the start, there was a lot of strategy to work on and minor choices about angles when sailing downwind. We had to get the timing just right for the gybes. After that, the voyage back upwind was more about speed, even if we had to get in the right place. Skipper Macif (Pierre Quiroga) got it just right at the right time, which meant he moved ahead. We could say it was a long downwind-upwind race. The return leg was long. I don’t think we have done 48 hours straight upwind like that before. However, we did manage to sleep, as when the boat is set up right upwind, you can get some sleep with the autopilot. There’s no point in getting soaked outside in those conditions, particularly as you need to avoid wearing yourself out with the next few legs coming up. Personally, on the night before the final one, I kept sleeping. I think I must have had thirty 20-minute naps, which is a lot for a leg of the Solitaire. I think it was like that for everyone.

Are you pleased with the result?

My goal in the first leg was to make it to the top ten or top five if possible, so that I wasn’t out of the running from the start. So, yes, I’m pleased. I would have given anything to get such a result back before the start. I made some progress again in this leg, which is promising for what hoes ahead. I felt fairly at ease throughout, even if I saw that I didn’t do as well as some in terms of downwind VMG sailing, and in lighter conditions, I’m not sure where I am.

Xavier Macaire did particularly well in this first leg. It looks like he is that much stronger than the rest. What do you think?

Yes, in his mind, it seems like he is convinced he can do it. He is there to win. Everyone knows that and saw that for themselves. Having said that, there are four, five or six men, who have a technical advantage with the boat. They have been there for three years and know the boat well. You can see they are at ease when trimming. There’s Xavier, but also Tom (Laperche), Pierre (Quiroga), Alexis (Loison) who have had some great moments. I may have forgotten some others, but you can see they know how to control the boat perfectly.

“It is true that the Solitaire suits me perfectly”

Is that experience what separates you from them?

Yes, I think I’m a bit behind in terms of trimming the boat, but I am making progress in each race and in each leg. I advance by watching the others and trying various things. But they have acquired a lot of background stuff over three years that I don’t have yet. I have only done a few contract jobs. I knew that before the start and it is a great challenge. In the Solitaire, it’s not all down to speed and working on your strategy makes up for the technical gaps. Xavier got a decent lead in time in this leg. Pierre is also well ahead, but over the past two years since the Solitaire moved to the Figaro 3, we have seen ups and downs in times with losses and gains, so I’m pleased to be where I am. Everyone knows that if you mess up the first leg of the Solitaire, in your mind, it’s tough afterwards.

Last week, Yann Eliès told us the Solitaire was the perfect race for you. How do you feel about that?

Yes, I saw that. That was really nice of him. It’s great to hear that from someone who has won the Solitaire three times. It helped boost my confidence. I know that reading that article may have an influence on people. I’m not the only one to think that, so I’m really pleased about that. Having said that, it is true that this event suits me perfectly. That is one of the reasons why I wanted to come back.

Why was there such a long break between your last Solitaire in 2016 and this one?

It’s because I had done four years on the Figaro and I wanted a change. To be able to be that much better when I returned. It was important to feel I wanted it and was keen and fresh. When that is all you do, it wears you down. So, I wondered around doing various things, in particular on big boats. I think it was important to do that. When you return to a smaller boat, everything seems that much easier. I’d already seen that when I was doing the Figaro: when Armel (Le Cléac’h), Jérémie (Beyou) and Yann (Eliès) returned to the circuit in the middle of the Imoca projects, they really felt at ease. That’s rather how I feel to. Everything comes more easily and appears simple. I was convinced that I would return. But I had been looking for partners for a couple years with no luck. That is a complicated part of the job. Until now, I was lucky to be with Bretagne CMB, and I didn’t need to look.

How did you find your partner?

In fact, it began when I was in the Jules Verne with Sodebo. Elodie (Bonafous) sent me an email asking me to do the double-handed transatlantic race. That is a race I wanted to do. I followed Elodie in the Tour de Bretagne (Round Brittany Race) in 2019 and I thought she was at ease with the tactics. Her Solitaire last year was also interesting, so I said let’s go for it. Then during the Sardinha Cup, I received a proposal for the project with Mutuelle Bleue, I agreed without hesitation!

What will be next for you after this season? Your partnership should go on for a while?

For now, it’s only on the Solitaire, but we’re thinking about continuing with OC Sport. Will it be in Figaro or on another support? Will Mutuelle Bleue continue? At the moment, we don’t know any of these answers. We will see after the the Solitaire. As it feels now I would like do another year of Figaro with a proper budget which would allow me to do a full season, if not, why not a bigger boat, Imoca, Ocean Fifty, with my own project?

In the meantime, are you continuing your collaboration with Sodebo?

Yes, I had been selected to the crew for the Jules Verne Trophy last year, we were lucky in the Covid year to have sailed a lot and the attempt was a unique experience. Spending 45 days at sea on such a boat is a privilege, we have learned a lot on the boat. There are some nice modifications there which are in the process of being done (in particular with hinged rudders) and these will bring more performance and safety, we will see what that will give us and so I will continue to work with the team, with the objective of helping Thomas and Thomas (Coville and Rouxel) to prepare the Transat Jacques Vabre. I will be a replacement with Matthieu Vandame, so as soon as I finish Solitaire, I’ll be sailing with them and we will be the last to jump from the boat after the start from Le Havre!