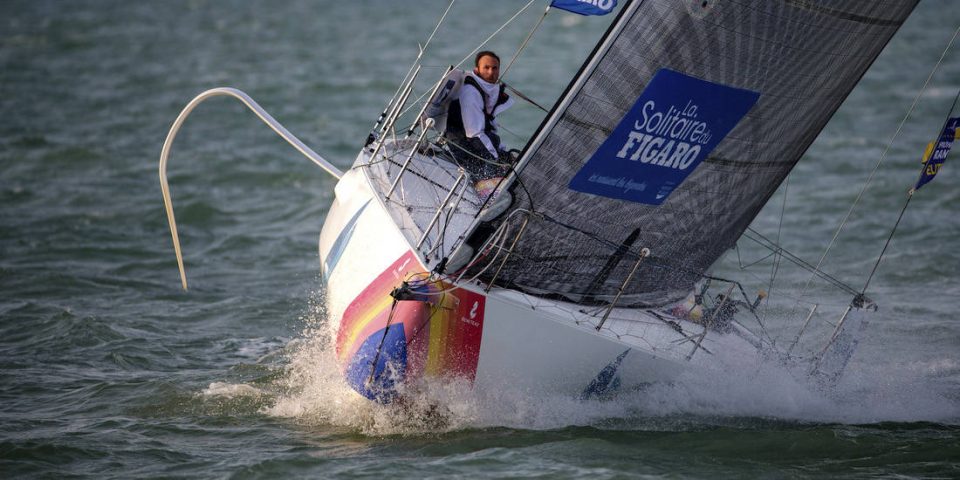 Figaro racers get through the crisis

The Figaro Bénéteau season gets underway again in a month from now with the Solo Maître CoQ, the first of the seven events on the race calendar. In spite of the economic and health crisis, the class seems to be resisting well. Tip & Shaft looks at their latest projects.

After the 2020 season ended with a triumphant success for Armel Le Cléac’h, who won the Solitaire du Figaro and became French Elite offshore racing champion, the Figaro Beneteau season starts again in March with the Solo Maître CoQ, closed off to the public but with around 25 solo sailors registered.

Between the seasons, we saw the election of a new board and chairman, Jean-Bernard Le Boucher (replacing Yvon Breton), who explained his goals: “The new board aims to be particularly open with people coming from various backgrounds to ensure we fulfil the requirements of everyone in the class, in particular in terms of communication. Over the past few years, we haven’t done enough communicating, in particular with the French Elite offshore racing championship, which is something that is not a primary concern.”

This explains the arrival of François Quiviger, in charge of sailing clients at the Rivacom agency, but who states he is there in a personal capacity: “My goal is to find partners to help the class organise things and become more professional. Today, in terms of promoting the class, it does not do as well as classes like the Mini 6.50 and Imoca.” A development committee including the newly elected member, Jean-Bernard Le Boucher and Eric Péron will be taking care of looking for partners, in particular a headline partner for the championship, which costs around 200,000 to 300,000 €  a year, according to François Quiviger).

The number of competitors
is close to last year

There are five events on the calendar of the French championship this season – the Solo Maître CoQ, the Solo Guy Cotten and the double-handed race around Brittany (weighting 2), the double-handed transatlantic race Concarneau-Saint-Barth (weighting 4) and the Solitaire du Figaro (weighting 6). The Sardinha Cup (double-handed) and the Fastnet (double-handed) are also in the official schedule. And for 2022, Jean-Bernard Le Boucher has announced: “We are examining two possibilities – with a strong event in the Mediterranean and competing in the Route du Rhum, which would be very good news for the class and the sailors.”

There should be around the same number of sailors taking part in the circuit as in 2020, in particular in the two major events of the season, the double-handed Transatlantic race (start on 9th May) and the Solitaire du Figaro (22 Aug-19 Sept), both organised by OC Sport Pen Duick. Alex Picot, their project manager talked about the former: “All of the partners considered that we needed a minimum number of entrants and we fixed that at 15: 16 boats were registered by 31st January, so the transatlantic race will take place.”

As for the Solitaire, the course for which will be unveiled in mid-March with a start and finish in Loire Atlantique and three or four legs including one in Brittany, the organiser and the class are hoping for similar numbers to last year (35 skippers). Jean-Bernard Le Boucher remains confident: “Today, the number of class members is at the same level as at the same time last year.”

There was a similar reaction at the training centres with around ten boats in Lorient, seven in Saint-Gilles Croix-de-Vie and a dozen in Port-la-Forêt. “In all, 15 to 17 racers from the centre will be taking part this season, which is a lot, so this is not a time of hardship in terms of the numbers,” explained Christian Le Pape, who runs the Finistère offshore training centre.

Tip & Shaft looked at who will be competing: 30 replied that they were certain of taking part in the Solitaire. This proves that the class was in the end not so severely affected by the economic crisis. The trainer for the group in Lorient, Tanguy Leglatin noted: “I thought it would be more affected, because it brings together a lot of small and medium-sized businesses, but in the end the damage has been limited.”

However, some have lost their partner: that is the case for Anthony Marchand (Groupe Royer), who will nevertheless be competing this year alongside Fabien Delayahe in the double-handed races, and Corentin Douguet (NF Habitat), who will also be lining up in the double-handed transatlantic race as co-skipper (an official announcement is expected soon).

The crisis has also affected Damien Cloarec: he has just found out that Sonergia, who was going to be at his side in the Solitaire, cannot continue, so he is looking for new partners, which is not that easy in the current context. “I admit that I have stopped looking,” declared Robin Follin, who has decided to work in the family-run decorating business, but still hopes that he will be able to take part in the Solitaire with a small budget.

Yann Eliès tempted,
Vincent Riou will be back

“It’s harder to find partners, but we feel that we are opening a small window of fresh air, the Vendée Globe has shown it well, our sport makes us dream,” explains Violette Dorange, who is looking for to make ends meet, but will run the whole season, including the double-handed Transat with Alan Roberts.

Sébastien Marsset, who will accompany Luce Molinier in doubles and would see himself racing the Solitaire, adds: “The impact of the Vendée Globe is helping a bit. Now you have to be realistic in what you are proposing, because even if you feel that clubs want to come, many have to make budgetary efforts at the moment. ”

Among the other sailors wishing to take part in the Solitaire, we find Loïs Berrehar (co-skipper of Tom Laperche on the doubles races) who says: “There is a good chance that I will be at the start. My priority was the Transat Jacques Vabre, which I will be racing in Imoca, but as the start has been postponed and that of the Solitaire advanced, combining the two becomes possible.”

This also motivates Yann Eliès (also entered in doubles, alongside Martin Le Pape): “I really want to run the Solitaire, it can be the opportunity to start a story with a sponsor, before the Route du Rhum in 2022 and the Vendée Globe two years later. As for Vincent Riou he confirms that he will be at the start of the Solitaire this year.

Some skippers have even found new partners, such as Achille Nebout (Amarris, who join Primeo Energie). But there are many newcomers making their debut on the circuit, and in particular on La Solitaire: Charlotte Yven, from La Rochelle Alexis Thomas, Englishman David Paul, Estelle Greck, Spaniard Pep Costa and former Navy combat swimmer Philippe Hartz.

Olympic ambitions feature more and more among the fleet, such for ex Mini sailor Luce Molinier and the Americans Jesse Fielding and Italian two times Olympian turned Volvo racer Francesca Clapcich (who race together in doubles races, separately in the solo events) all arrive with the ambition of train for the offshore doubles event for the Paris 2024 Olympics (if confirmed).

“The Figaro circuit is the best single and double-handed circuit in the world. No question. Our team is aiming at the 2024 Olympic Competition and strategically there is no better way to prepare for the competition than enter the Figaro Season” says American Jesse Fielding, whose US sponsor is State Street Bank and Trust. While Luce Molinier adds: “To be as competitive as possible on the Olympic project, I have to do the Figaro. ”

And what about the Vendée Globe’s Figarists, who do often like to return to their first love after they have returned from racing around the world? “I’m always tempted, but it’s just not reasonable,” replies Jérémie Beyou. “I did think about it during the Vendée Globe, but it will all be too tight with the Jacques Vabre”, adds Charlie Dalin, while for Sébastien Simon, it is a case of….”No….. not at the moment.”