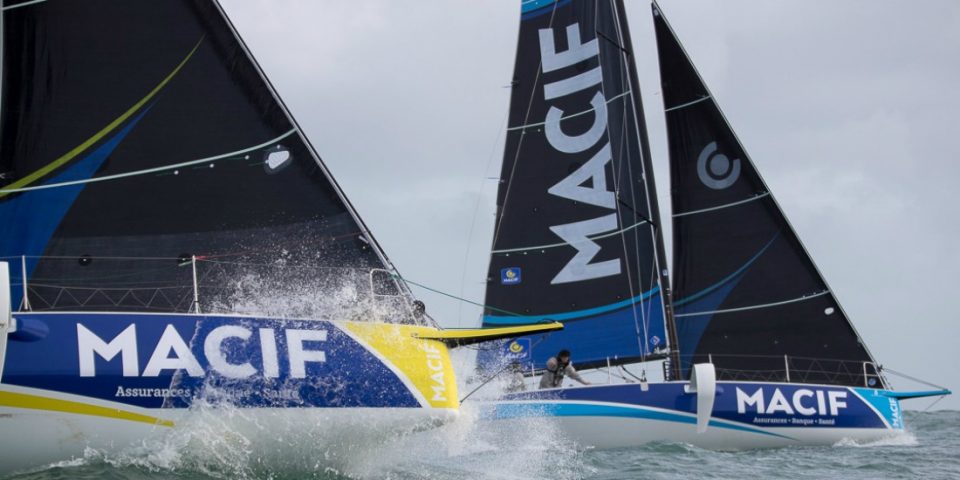 First toughts: the Figaro 3 is both physical and technical

Since the first batch were delivered on January 7th now 49 new Figaro Bénéteau 3s have been delivered to their proud new owners. More than thirty are sailing now, primarily spread between Lorient, Port-la-Forêt and Saint-Gilles Croix-de-Vie, where skippers are hard at work preparing for the first event of the season, the Sardinha Cup (26 March-13 April ). Tip & Shaft has gathered up the first throughts of several sailors (Loïck Peyron, Fabien Delahaye, Nicolas Lunven, Adrien Hardy, Alan Roberts), and also those of Christian Le Pape, the top dog at the pole Finistère race training centre at Port-la-Forêt, his Lorient counterpart, Tanguy Leglatin, who heads up the training group at Lorient Grand Large, and Etienne Saïz, who is coach of the Team Vendée Formation.

“We are like children at Christmas who are just discovering their new toy” Loïck Peyron hits the nail on the head as he captures the mood of the sailors who have been learning the subtleties and idiosyncracies of the new Figaro 3 and also the problems that come because the boat is so new “We are all in the process of learning and testing the reliability of the mechanics, which is not so simple because it is a series production boat”, continues veteran Peyron, skipper Action Enfance.Christian Le Pape agrees: “It’s a nice boat not without the problems of its newness in terms of the finish, but these are cosmetic, minor problems, some concern the bowsprit, the set up of the foils, t halyards that rub, just teething issues which are sorted by optimization and a little time in the yard”.

But there are bigger issues, according to one who is closely involved, “Most of the skippers at the Pole had their boat scanned and did not notice any major differences in the alignments of the appendages for example, but some hulls are a bit bumpy, you can not really feel it, but the class will have to find solutions, because some people will have a hard time believing thier hull is less efficient. ”

As for the performances of the boat all the skippers we questioned agree: the Figaro 3, with its foils, its lack of ballast, a fine, slender keel and more rounded hull is not so easy to sail fast upwind. “It’s very light and as there is no ballast, it lacks a little bit of inertia, we will probably have to work a little more and steer more often, depending on the sea state”, confirms Loïck Peyron. Fabien Delahaye adds: ” Accelerating out of the tack is harder than on a classic boat like the Figaro 2, you have to get the flow attached over the foils, to look for speed, it is an acquired skill we will have to learn.”

Reaching and running the VPLP design is more efficient and more stable than the Figaro 2: “The boat is lighter on the water, it accelerates it is faster, it is much more responsive,” says Etienne Saïz. “I think that reaching at 120-130 degrees from the wind the boat can be 15% faster with with averages speeds more like 14-15 knots,” says Tanguy Leglatin, Delahaye adds: “We can get to 20 knots in 25-30 knots of wind and angles of 120-125 without feeling in any danger. We did not see such speeds like that on the Figaro 2, but the foil helps lift the boat and that there is generally more volume and lift.” These impressions are confirmed by Christian Le Pape: “Reaching at 16-17 knots, the boat is quiet and stable under spinnaker, it is fast, you really have to go some to make it broach. It is noisy above 12 knots, because there is a lot of vibration”. Adrien Hardy is a bit more reserved: “I do find that the performance of the boat and the sensations are a little disappointing compared to what you can feel on other boats, like the Mini or bigger boats. ”

Among the new innovations of the Figaro 3, the jury seems to be out on the foils. Hardy goes on: “The foils don’t feel like they do an awful lot you try to ignore them at times trying to make sure that don’t hinder us, rather than trying to make them them help us. In fact they really work above 25 knots of wind, conditions which don’t happen very often, and of course the average windspeed on La Solitaire is 15 knots.” For Etienne Saïz, one of the challenges is to learn how to use these foils in a mode other than providing lift: “As long as we are below 10 knots, it’s a board rather than a foil. We realize that they are very important in terms of drag versus achieving height in particular conditions which we are still to learn.”

Also new to the Figaro 3 compared to its predecessor are the sails. The symmetrical spinnaker of the Figaro 2 has been replaced by a larger asymmetric (up to 121 m2 from 85m2 for the big spinnaker) and the addition of a gennaker should open up the game, especially as it appears already that the various sailmakers and designers have opted for quite specific choices between dedicated, defined sails and more all round, typical sails. This has pleased Adrien Hardy: “The gennaker and the small spinnaker,  which we did not use much on the Figaro 2 – are real advances that will promote more different choices and strategies on the race course, much more so than on the Figaro 2 where the course were always close and straight. ”

And so there are interesting choices to me made in the future according to Nicolas Lunven: ” On the asymmetric spinnaker you can not soak very low low in light winds, it means that when you will have VMG runs, before a jibe did not create more than 30 or 40 degrees difference on opposite gybes on the Figaro 2, now it is much more like 60 or 80 degrees and so it will be a bigger decision to go or not.”  Etienne Saïz is also more cautious about the effects of the new sail configurations: “The gennaker opens things up but I do not believe the technical gains will stand for long. As soon as they see that a guy has a range where he gains everyone will jump on it and do the same, it will no longer be down to the fine tuning, to tiny tweaks and trim changes.”

The choice of sails will be important and the performance of the Figaro 3 is said by all already to be “more subtile and more technical”, it will initially be at least about finding the right settings and that means a lot of time tuning, training and testing. “The boat requires a lot of precision and concentration because it wanders easily, it will take hours at the helm,” confirms Adrien Hardy. Fabien Delahaye emphasizes: “It’s a very light on the helm and the lack of feel makes driving difficult, it’s hard to feel if you are in the groove or not”. Tanguy Leglatin concludes “It is a boat that will reward good trimmers and good helmsmen“.

But it will also reward the sailors who will lose the least time in their maneuvers, an aspect which will also have its importance on a boat which skippers are already saying is physically hard. Tanguy Leglatin says: “I think that unfortunately, for the solo girls it is going to be pretty hard, between the handling of the genoa which is quite heavy, there is a bit of friction in the halyards and hoisting and dropping the big kite creates a lot of risks “. Loïck Peyron confirms: “It’s going to be complicated when the asymmetrical spinnakers are on the deck, we’ve already seen quite a lot of them sucked in the foils on the slightest mistake. It might justify having spinnaker snuffers or socks, which we have never seen in the Figaro “. “Maneuvering the boat is not going to be that simple, it will also be one of skills to be honed and low risk options to be used maybe on this first year.” says Tanguy Leglatin, “Botching up a maneuver will be costly. “

Briton Alan Roberts, who is working with Jeremie Beyou, and is using Doyle Sails, observed:
“I spent a week with Stu Bannantyne from Doyle Sails down in Lorient and we have been learning and developing the second set of Figaro sails that I will be racing with this season. At the moment there is a variety of philosophies in the sails, and I think we will see reflected in the way people sail too, how hard can you push? how safe should you be? For sure the aim is to get around without breaking but not back off or especially allow anyone to get away. Myself and Jeremie are working hard together day and night to understand the new boats and get ahead of the game on the preparation side, whiles putting the maximum hours possible in on the water. It is great to be pushing this hard but also remembering to get enough rest in so as not to be burnt out for the Solitaire and the season ahead. WORK HARD AND STAY MOTIVATED is the aim of the game at the moment.”