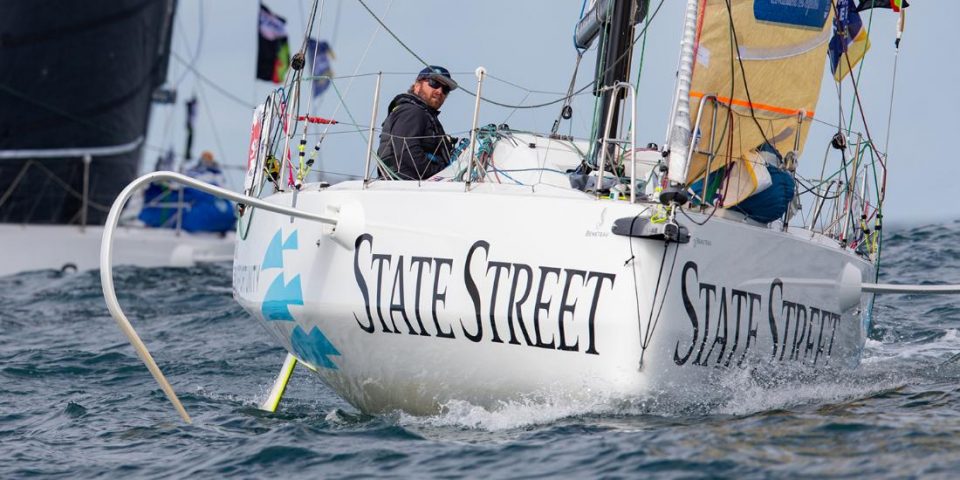 Racing in the colours of the State Street Mixed Marathon Sailing Team, Jesse Fielding and Francesca Clapcich are treading where very few have gone before as American skippers racing on the Figaro circuit. After announcements that mixed gender offshore racing would feature in the 2024 Paris Olympics the initiative was set up by Malcolm Gefter, an MIT and Columbia University professor of Biology who also has held executive roles in public and private biotech companies. With the backing of the State Street, a company based out of Boston, Clapcich and Fielding made their debut in the 2021 season’s first race series, last week’s Solo Maître CoQ and plan to race two handed on the Fastnet and then La Solitaire in September. Tip & Shaft caught up with Rhode Island’s all American Fielding on his return from Les Sables d’Olonne.

So Jesse what is the set up with your team?
Francesca and myself operate basically as co-skippers. We are fortunate enough to have our own Figaros for this season with our sponsorship which is an incredible opportunity. But we are one team when it comes to boat prep, weather prep or practice and training or whatever it is. It is great to have a lifeline over in France for example where the level is incredible in France and so an equal co-skipper and a team-mate is massive. We are lucky to have this set up.

So the Maître Coq was your first Figaro race ever, how do you feel it went and what was your experience of the Figaro Beneteau 3?
For both of us it was our first ever solo race and our first ever Figaro race in class, ever. A private US owner purchased a boat a couple of years ago and we sailed that boat together double handed, and then we acquired a second boat in Annapolis while its owner Laurent Givry [racing this year in the Transat Concarneau St Barth with Estelle Greck, ed’s note] who played such a role in inspiring us. Everytime he would bring his boat it would be great, we would start with a glass of red wine with Laurent telling us is we did not get our butts to France we were not really doing this thing at all. It has been over a year in the making and Laurent’s boat has become part of our programme really. We have had two boats now in the US to sail together. Laurent is participating in the Figaro season too with Estelle Greck, a bizuth, rookie like us. So the three of us are connected to Laurent. The connections and the community in the Figaro class are so heartwarming we are hooked, addicted.

Your boathandling and straight line sailing was not too bad then?
We got round safely and were not a danger to anyone and did not damage the boats! We can now say we are on to the learning curve and it is long. We have a long, long way to go but we would not have been able to charter boats from Marcus Hutchinson, to get off a plane and go sailing without that year of practice we have had in the United States. It has been excellent. We owe a huge thanks to everyone in the US who helped us and encouraged us and made it all possible. They are all now very excited we are into the game in France and it is a whole different level.

Did you have any coaching in the US?
It is such an unknown genre of sailing in the US, it is increasingly followed, but especially during COVID people have been paying more attention, they have been looking for content to watch, but there is no real expertise. We are breaking new ground. We have been using what expertise there is for instrumentation, go fast, boatspeed, and so on, great sailing eyes. We sailed with Ken Read last summer and he is excited about short handed sailing and we have a team around us that helped us a lot, including Jonathan McKee who did the MiniTransat, but anyone who has experience has reached out and helped and we had done all we can to take that on board. But the reality is that until you get to France and race there you don’t know the level.

So what is your programme from here on?
This year we race as ‘bizuths’. We have asked for so much advice and help and everyone has been happy to share, it is such and open, sharing culture it is very cool. Season 1 is the rookie season we want to sail safe, smart and learn as much as we can. If we can get through that then our future is bright. This is the best offshore sailing there is in the world right now and we want to be here and learn as much as we can for as long as we can. We are coming back in the middle of June. We will do the Tour de Bretagne as duo on one boat. We will do the Solo Concarneau  individually, then we have the double handed Fastnet in the Figaro class on the schedule and then straight into La Solitaire solo, so the only events we are really not doing are the Sardinha Cup and the Transat en Double. In the future we want to do those races but with the health situation we were always concerned about signing up for too much early on and not being able to get back and forth to the USA. The goal is to be part of the Figaro circuit for as long as possible.

Where are you training?
We will be back to France in June and get straight into training in Brittany. We will be with the Lorient group with Tanguy Leglatin. We also spent time with the Team Vendée Formation with Etienne Saiz which was incredible, super young energy. Every time, everywhere we look there are so many young people and so much energy, and of course the likes of Gildas Mahé and Vincent Riou, it is such a great mixture. We are thankful for all the help we have had.

“The Southern Ocean does not care who you are,
where you came from, what gender you are”

The goal was initiated by and driven by the potential possibility of going to the Olympics?
What led us to the Figaro class and ending up here in France is really that to sail in any even whether it is doubled handed in the Olympics or double handed in any class, say the Fastnet, anything larger you need these base skills that the Figaro gives you like no other class or arena, it is the best to go and test your skills as a singlehanded sailor. And if you then have a mind for teamwork then you can put yourself anywhere with anyone. That is the mentality, the resilience, the skillset we want to build.

Given the seeming uncertainty presumably the Olympics are not the be all and end all then, the only end goal?
I think it is OK for us to say that at the moment. It is a difficult subject at the moment and no matter what happens we are here because we believe in the genre of short handed, of two handed sailing and our mission of representing a better world by a having gender equal, co-equal, co-skipper team is what we identify with and what our sponsor identifies with. The Figaro is the best arena for us and the best pathway right now. Originally there was a fire started by the announcement of the Olympics and we give that full credit for providing the energy and the initiative, and we will see what comes down the line, but it has struck a nerve for ourselves and within people around us, representing the change that we are as younger people, showcasing a more equal world is in the last year where we have solidified our identity as a team. It is happening over here but France is so much more egalitarian in terms of an environment where this type of team thrives.

“Mixed doubles in the Olympics would be an incredible showcase”

But the Olympic announcement – whether is happens or not – has already been great for mixed double handed sailing and the message is spreading fast, to have sailors like Dee Caffari and Shirley Robertson campaigning two handed is great is it not?
These people are our heroes. Francesca sailed with Dee on Turn the Tide on Plastic and she is a hero of Francesca’s. She talks of Dee’s fantastic leadership qualities and the group she put together and the poise which she took that team around the world with, that is the message of the future. You see this happening so much in the French offshore scene and it is radiating outwards now, the more people that are touched by the message that you can be young, you can be a woman, you can thrive in this game which goes so far. The playing field is so level. On the Solo Maitre CoQ you have a low pressure coming towards you with 46 knots and it does not care who you are, the Southern Ocean does not care who you are, where you came from, what gender you are, it is about getting to the other side. That is what inspires us. We both come from backgrounds where we did not have an awful lot of support to be in this game and we have finally hit this arena in our sport which is such a level playing field. This is not about can you afford this block, or to be in this yacht club, or do you know the right person, this is about being on the start line then it is up to us.

But it would be a great message to have mixed doubles in the Olympics?
It would be an incredible showcase. I think it would be such an incredible opportunity for the sport of sailing to show the opportunities we do have. We are not a sport which is out of touch we are a sport with incredibly egalitarian human elements to it. I hope that it is a reality that the sport can be showcased to the world.

How did the sponsorship from a global player like State Street happen?
We are one season and have full commitment through this season. We have a team manager based in the United States Malcolm Gefter. He is incredibly technical, has seen many iterations of the same things, he is passionate about sport and is a champion in his own right in rowing and sailing and comes as an MIT Professor of Biology. He reverse engineered the problem of how we grow the sport and compete at a high level. He saw this as a chance to get a foothold and showcase this and he leads the charge and we are fortunate enough to be the athletes chosen to represent those values. The sponsorship is reassessed year on year and so we hop the message continues to resonate. But we hope the message being in France in the Figaro fleet continues to resonate and it is a great match for the message that State Street Marathon Sailing wants to promote. Malcolm is well connected and he sought out to seek some sponsorship that matched the profile of the team as a mixed gender Olympic effort. He found State Street and set up the team.