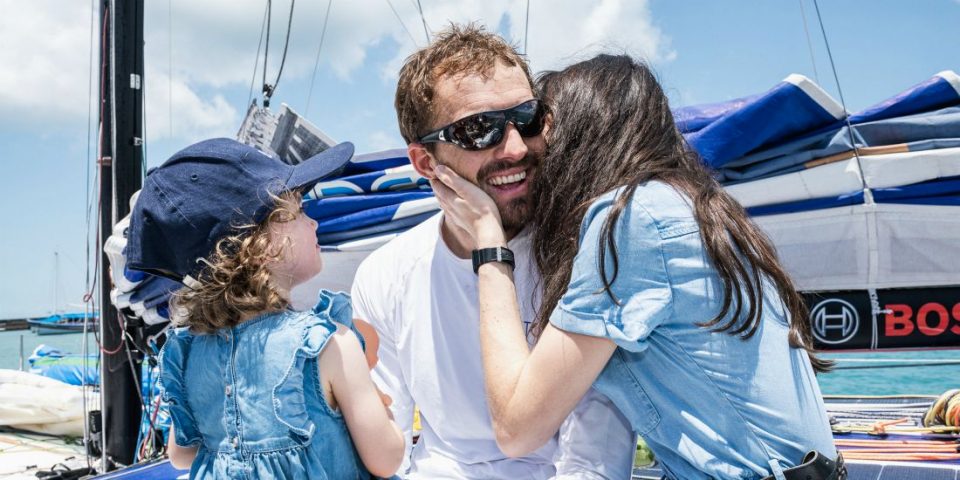 Sam Goodchild: “The Solitaire is the best race in town”

Through talent, hard graft and building a broad based experience Sam Goochild has forged himself a diverse career, increasingly among the early picks for big multihull projects, IMOCA and Class 40 races. One year ago it was a disappointed Goodchild who had, again, suffered a Transatlantic breakdown – losing the mast of his Class 40 whilst among the leaders of the Route du Rhum. So when he finished the Transat Jacques Vabre on his third attempt in Class 40, second place on Leyton with Fabien Delahaye felt particularly sweet for the sailor who turned 30 on Tuesday, the day that Tip & Shaft caught up with him in Salvador de Bahia. Goodchild, whose career best on the Solitaire was 11th in 2013, confirms he will return to the Figaro for next year, racing in the Leyton colours.

You’ve had a few disappointments in your Transatlantic races, that must make this second all the sweeter?
It has been a while coming. In Class 40 it is third time lucky. What’s nice is to have had the aim, to win and though we didn’t quite get there, we sailed a pretty good race and have no regrets. So it’s good to have that result under the belt and not to have been worrying about costs again, thinking what could go wrong and what you would do if it did go wrong?

Did you do anything different this time to mitigate against race-ending problems?
I wouldn’t say any more than normal. I guess the experience helps. My first race was eight years ago in 2011 and then going sailing on different boats with different people you build the experience of what could go wrong. So, you’re definitely double checking everything. And then we’ve got Ollie Young to look after the boat and he is pretty meticulous and has lots of experience from before. In essence though it’s what I did for the race last year (Route du Rhum) and it didn’t end up well, so you’re never hidden from all potential problems.

How do you evaluate your performance looking back at the whole race?
There are always points in a two and a half, three week race that you think “if we’d done this we would have gained a bit there or there” but I don’t think you’re ever going to get to the finish line being like “we never lost a metre”. But we didn’t make any big errors thinking we should have gone further south or further west or should’ve gybed at this time or done something different. We were pretty happy that we got the most out of the boat and the most out of what we could’ve done with what we had.

So you move back to the Figaro for next year?
Yes, the Leyton project is finished with the Class 40. They’ve got a Multi 50 launching in February next year for Arthur (Le Vaillant). I’m going to campaign with the Figaro after they move up to the Multi 50. I am going back to France to get straight into it with preparation and training over the winter. Initially I’ll be getting the boat as ready as possible, knowing it it’s been a pretty difficult first year for the Figaro 3 class. There have been a few teething problems. We need to get the boat up to speed and then get training at the beginning of next year to go do the AG2R in April and then the Solitaire du Figaro at the end of August.

Who will you do the AG2R with?
I want to get home and have a think about it and decide what sort of profile sailor I want to sail with. I’d quite like to do it with Fabien. He needs to think about whether he’s going to try to do it on his boat or whether we do it together on my boat. I’d quite like to pick someone who did the Figaro this year because obviously it’s a new boat and they will have learnt a lot in the first 12 months of sailing.

The Figaro is unfinished business, you always wanted to come back to the Solitaire?
It’s the best race in town. In terms of competitiveness there isn’t anything else like it. The IMOCA’s are cool but there are still only five or six boats that can win, if that. Class 40 is cool but there are again only 5 or 6 boats that can win that. In the Figaro it’s more like there are 20 boats that could win. If you had a bad race you’re finishing outside the top 20. If you had a good race you’re finishing inside the top 5. In the other classes it’s not quite like that. The other classes are a bit more about technology advancements. It’s nice to be able to come back with a proper project and proper foundations.

How did you get into Leyton which sounds like a project with a future?
It’s obviously Arthur’s project. He has been with them since last year and he did the Route du Rhum. He invited me to do this Transat Jacques Vabre with him as he was originally skippering the boat and then he broke his foot and how to get operated on in August. So, I ended up doing this race without him but with Fabien. When I met François the boss of Leyton I said how I would quite like to do the Figaro next year and he said how he had a boat and was looking for a skipper for it. Leyton is an English-French company so it’s international. They were pretty happy to have an English skipper as well as a French skipper on the project.

The Figaro is the main thing for 2020 then…..
That’s my main focus. I’ve been part of the Sodebo crew this year and the aim was to continue sailing with them a bit. My aim has always been to work towards having my own projects and doing the Vendee Globe. The Sodebo team is incredibly interesting because you learn a lot about management of foils and management of prototype boats even if it’s not exactly the same as an IMOCA. I want to be involved with them as much as I can.

You’ve lived full time in France for more than five years. Draw some comparisons between the offshore sailing cultures and how you see French sailing culture evolving?
I’ve been living there full time since 2014 and part time since 2010, so I’ve embraced their way a lot more which has its pros and cons. It’s much more driven by passion the French way of sailing.  All the projects in France are sponsored. There are no privately owned sailing and most of the projects in the UK are privately run. There so much depends on the owner and what their ambitions are at the time. I did a lot of miles with Lloyd Thornburg and Brian Thompson on Phaedo and I did quite a few miles on Spindrift and a few other French projects like the IMOCA for the Transat Jacques Vabre 2015. I like the combination and I guess the hard thing is trying to find a sponsor to run my own project. But it’s easier said than done. I think the French are changing. If you look at what French offshore sailing was 20/30 years ago when the Jean Le Cams were at the top of their game, then it’s not the same sport anymore. It’s become much more calculated and data driven, there’s much less feeling. If you look at guys at the top of their game like Francois Gabart he’s just very driven by data and numbers and that one of the reasons he’s so strong. He’s got a dinghy background plus a data background. It’s definitely heavily weighing more towards the guys who are big on data analysis. If you look at Volvo and America’s Cup world the Anglo-Saxons were ahead of the curve compared to the French. If you look at all the top offshore sailors today like the Nico Lunvens and Fabien most of them came from the Tour de France and they started young, became a good bowman and got the experience of sailing offshore and coastal stuff. In time, they were able to build their own campaigns and got massive amounts of experience but that doesn’t exist anymore unless you do the Figaro. Finding a sponsor for a Figaro is nowhere near as easy as finding a ride on a Tour Voile boat. I think offshore sailing in France will take a hit from that in the long term. There’re definitely still young guys going through the Figaro but it’s nowhere near the same.

And the Vendée Globe is still the dream, do you feel sad to have missed the 2020 boat?
I’d love to do a Vendee, it’s the ultimate challenge in our sport and there’s nothing more difficult for you to set yourself but I’m not as hell bent as ever on being there. I’m much more driven for example to go do the Figaro and try beat the best. I’m just not hell bent to do the Vendee on an old boat just to do it. I guess the risk of that is that I might never do the Vendee because if you don’t find a sponsor you’re going to struggle.

And The Ocean Race appeals and ticks a lot of boxes?
I’d love to do it. I feel like I might have missed the bus (today) a bit in terms of being under 30 (!!) but I don’t think I’m in a strong enough position to say my aim today is to do The Ocean Race and to say no to anything else that comes up. Dock talk is that only two new boats are being built and then there are a few old boats hoping to find sponsors. But it seems like there’s only two fully funded teams. There are also the 65’s which could potentially have a more competitive race. If the opportunity jumps up I’ll go for it but I don’t see myself in a prime position with fewer and fewer spots on board and more and more rules to sit by – female, young or a skipper or navigator.