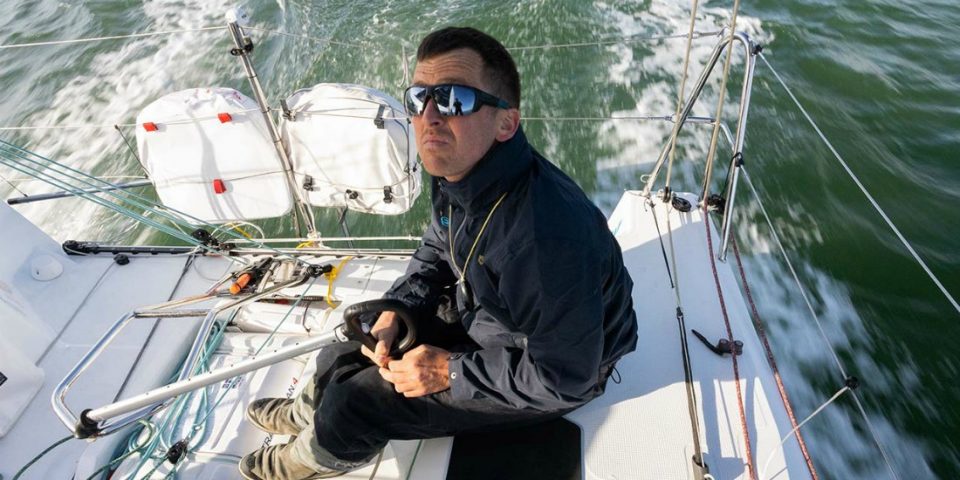 Tom Dolan: “I want to get my head sorted out a bit”

French based Irish skipper Tom Dolan (Smurfit Kappa) will sail the Tour de Bretagne à la Voile with aspiring young Turkish solo racer Ediz Onen. His choice of co-skipper is very much driven by his philosophy of trying to give opportunities – where he can – to young sailors who are looking for experience, just as he was five or six years ago. In the new Figaro Beneteau 3 he opened the season sailing with Damian Foxall in the preparation phase, 13th in the Sardinha Cup including a fifth in the third leg. The Smurfit Kappa skipper had a mixed La Solitaire URGO Le Figaro, showing many bright moments, but was ultimately disappointed to come away with 32nd. Tip & Shaft caught up with Tom in between training sessions with the Lorient group.

What was your own debrief after La Solitaire and how does that affect your strategy for next year?
When I was ahead I seemed to be as good as the best and when I was behind I was terrible, as bad as the worst. So I want to get my head sorted out a bit. I am planning to work with a very good sports psychologist in Dublin who works with the Irish Olympic team. I saw her a bit last year but this year time ran away with work on the boat and training and everything. That side of it fell by the wayside. I did not put that side of it high enough on my list of priorities. I imagine the things I need to work are basic, decision making and how I can look after and manage myself better, how to break the pattern of doing badly when you are losing. That’s in the head isn’t it? I maybe concentrated too much on finding speed. That’s great of you are going fast in the right direction but if you are going fast in the wrong direction……

And since then what have you done?
It has been good to go off and do other stuff, other sailing and be able to enjoy it for what it is without having to worry about budgets and maintenance. I did Fastnet two handed with a Polish guy in a SunFast 3600 and we got sixth in IRC double and first of the SunFast 3600s. I do coaching with guys like that on the boat. We have an offshore sailing coaching and racing school and that came through us there. We can manage the boat, optimise is and stuff like that as well as help them improve. I prepped the SunFast 3600 optimised it and coached him and it went well. It was good to have a fridge and a toilet you sit on and pump and bunk cushions! Comfortable.

Thirty second was a bit below what you hoped for, have you squared that result away?
It took me a week or two to come terms with the result as against what I had hoped for. But we debriefed quickly with the (Lorient) group. I was fast downwind in the strong stuff but, like I say, some of my decision making was not good especially when I got tired. I think the speed comes from the Mini and from sailing Hobies a lot with Glenans. I will try and sail a bit less, going for more quality training and racing than quantity. Looking back I was pretty wrecked going into La Solitaire not least because I did so much of the boatwork myself saving on a full time preparateur.  It was not ideal.

Damian Foxall was a positive influence during the early season, can you do more with him?
I saw Damian in Concarneau. He is very, very busy so I don’t think we can do much more just now. We will set up a proper meeting soon enough and I’ll get his feedback and thoughts on La Solitaire and the season and talk a bit about sustainability.  I’d certainly love to follow in his wake and do some of the things he has done, especially The Ocean Race.

How did you come by Smurfit Kappa and what are the terms of your deal with them?
I have another two years for sure with them. I had a good introduction to Smurfit Kappa in 2017 when I was preparing for the Mini Transat. I had a meeting. It went well. They gave me a little bit for a logo on the sail which I had. They had the tracker up in a couple of their factories and followed it very closely and it worked well. At the end of it it was them who sent me an e-mail to say ‘well done Tom we are really proud to have supported you’. So I asked for another meeting and put a proposal to do La Solitaire last year and really it has gone from there. I spoke to them about the new boat and it came at the same time as they are launching an initiative called Better Planet Packaging, trying to stop putting plastics into the oceans. We got on and it has gone from there. I do a set number of corporate days in factories and plants speaking and take them sailing for a certain number of days. which I love and they really seem to do so too. It is a great day out for them on the boat. It is different, not like saying rugby where they can’t get on the pitch and play, here they are on the race boat and we have some lunch, it’s a fun day for them. And early on in the year I spoke at a big innovations conference for all their clients near Amsterdam, highlighting the issue of plastics in the sea. They get images and a certain number of videos and so on. And in September we will go to an island off Dublin with the boat and some kayaks and clean up the beaches there.

So what does that give you for a budget each year?
I am not allowed to say but I was looking for an additional sponsor for some space on the boat before La Solitaire, half of the boat was still blank so there were opportunities for other sponsors what I needed but I never got there. The aim was to find the second half of the budget. So I have to work, like doing the Fastnet and doing coaching and everything I can. I manage to squeeze through. I am at the middle to lower end. I am looking for some co-sponsors. I would like do the AG2R but don’t have the money right now. It is not essential, I am not sure how much it would help my La Solitaire. I reckon it would cost me €50-80k to do it right. But I still work and do coaching since we set up Offshoresailing.fr in 2015 and it has gone on from there doing racing coaching, it evolved from Minis to bigger boats and so on.

And right now you are committed to giving back, to helping the Irish charity sailing into wellness.
When you are looking for money, especially, you are always saying ‘help me. I need this.’ Or whatever, my this, my that. And there are so, so many people have helped me over the years. So when there maybe is a chance to give something back then I want to do everything I can, helping other people. I looked for something that made sense for me. And in Ireland in particular I think a lot of us have all have someone who have had a close connection with someone who has had a mental illness, or been affected by drugs or alcohol addiction problem. It made sense. And they really make sailing accessible to all, to everyone. I loved that a bit from Glenans where I came from, it is not about blazers and yacht clubs – which I am not against it is just not ‘me’. So I am going to do some coaching and sailing with them. I did a speech in Dublin about weather and that raised some money for them and now I will take the boat to Ireland and do some sailing for them, taking people out for a day or half a day and raise some money for them like that.

The Olympics going to a double handed offshore event must interest you?
Absolutely. They are waking up in Ireland definitely. I have been annoying them (the ISA) for a few months already and will see them when I am in Ireland soon. I am not looking to squeeze my way in or anything like that. I’d just like to make sure I get a fair crack at it, of qualifying. That would be cool to represent Ireland.