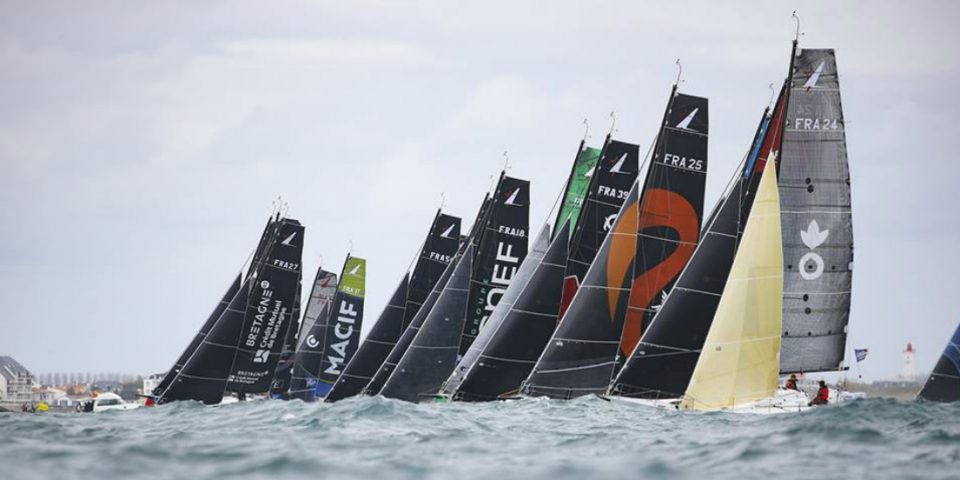 A real puzzle choosing the sails

One of the key elements of this Sardinha Cup was that it allowed the 68 sailors to compare their sails in race conditions after two months of training, so that they will be able to choose a new set for the Solitaire Urgo le Figaro. Frédéric Duthil has been watching this closely, because as a sailmaker with Technique Voile, he is the supplier for several boats. Finishing eleventh overall on Région Normandie, he believes that the differences are not that great: “Firstly, we can see that there were no gains in performance by using woven sails rather than membrane sails. After that, as far as the flat sails were concerned, everyone has gone for more or less the same shape, so that when sailing upwind, no boats were stuck and none went 10% faster than the others. There are greater differences with the downwind sails, but I think we are all heading towards a choice that works well in every situation.”

Gildas Mahé, 9th on Breizh Cola Equi’Thé, agrees: “No one found anything incredible allowing them to make a huge gain.” Anthony Marchand, 4th on Groupe Royer-Secours Populaire thinks along similar lines: “No one stands out in terms of pure speed, as we saw a few years ago with Charlie Dalin who was really fast upwind.” As for Francis Le Goff, he added: “From one leg to another, everyone found a little improvement and we saw that in the last leg with Yann Eliès and Sam Davies on the downwind run under spinnaker, during which they were much quicker.”

What does the skipper of StMichel think? “On that gybe, I found something that 80% of the others didn’t. It’s maybe down to my sensitivity rather than rationality, as that meant I was able to discover something different. In general in this race, we were able to see big gains in a few degrees of difference and that course produced a high potential speed under gennaker.” In particular in the second leg, where a group that was eight miles behind when they passed the Jument on the Glénans to catch up thanks to a huge speed differential under gennaker. “With the new sails, the gaps can widen and close quickly. We didn’t see that so often with the Figaro 2, where we were always stuck together and there was only a speed difference of 0.1-0.2 knot. Now in certain points of sail, you can gain more than three knots,” explained Anthony Marchand.

After the Sardinha Cup, he does not feel they have made any progress in deciding which sails to choose: “We have hardly had the time to check out the first set and we have to order the second [for the complete set, that costs around 30,000 euros, editor’s note], and no one really knows what to do.” Pierre Quiroga (Skipper Macif 2019) remains equally sceptical: “After the training sessions in Port-la-Forêt, we were able to draw some conclusions about which sails did not work, for example, the big spinnaker from North Sails, as on a single downwind run, we lost 3.5 knots in pure speed, which is rather worrying.”

Not the same song solo

If good sails help to go fast, all the sailors we spoke with agree that solo, and especially in this Year 1 of the Figaro 3, they will not necessarily be the main factor shaping a performance. “What will make the difference is being able to perform the maneuvers without mistakes and losing. On the Figaro 2 it was probably up at 30 knots when sailors started to feel a bit stressy, here in the 3 it is much more like 22-23 knots, at that the boat is demanding “, explains Frédéric Duthil. Anthony Marchand concurs: “It is pretty full on in 25 knots, it’s sometimes a bit like the Volvo: you can have the boat on the edge and you still have to go to a larger sail, and in this case, if you do not prepare your maneuver well, it can get very messy very quickly, even dangerous. ” And certainly will cost precious miles if it is badly executed or made too late: “Time off track is going to be very expensive,” predicts Race Officer Le Goff.

According to Frédéric Duthil, sailors who are more used to demanding boats such as the Imoca will clearly have an advantage at least in this first year: ” Yann Elies, Michel Desjoyeaux, Armel Le Cleac’h, Jérémie Beyou, Charles Caudrelier, those who have experience of the 60 footers solo will be more comfortable, because it is a boat that must be pressed, they will also have less stress t speed. Others will adapt and get used to it but I think that will take a little longer. ” Pierre Quiroga notes : “A guy like Beyou (Jérémie Beyou, 16th in the Sardinha Cup) will feel more at home because he has so much experience and the boat is so physical, that the technique and the speed mindset will be a bigger factor in relation to speed. ”

Another factor that will be  even more important solo and which was partially highlighted on this Sardinha Cup: the choice of when to nap under a pilot which is not yet fully developed and optimised to the boat. “We will have to let the pilot steer from time to time but we saw that both upwind and downwind you have to steer and steer well to move well! The choice of when to go to sleep will change a lot of things, especially as the boat has a propensity to stop. You can lose a lot of places  quickly.” confirms Beyou (Charal).

Is there a hierarchy emerging?

What can we learn from the Sardinha Cup final standings? The game is on.
“It is no coincidence that the regulars, the usual suspects, of La Solitaire are at the front“, notes Francis Le Goff, who says of the victory of Yann Eliès and Sam Davies: “The experience, the commitment and the desire prevailed, they won, that is important.” Beyou confirms “The winner is still Yann Eliès, so the main lesson is that he is still strong and motivated. It is going to be hard to take on La Solitaire.”

Eliès answers: “With the crazy level that there was, one can go from world champion to no good at all. But I tell myself that between what I felt at training in Port-la-Forêt and what we saw on the the Sardinha Cup, there is a possibility for me to win La Solitaire this year, I believe that. ”

Others think that we should not draw hasty conclusions from this first race of the season: “It’s too early, the rankings changed a lot from one race to another,” says Gildas Mahe. Pierre Quiroga concludes: “I obviously do not expect to find Yann in 15th place on the Maître CoQ or La Solitaire, but I would say that 10% of the order was shown on this event.”

Technical problems in the process of resolution, the class wants to professionalize

The Sardinha Cup was marked by what Yann Eliès calls “the psychodrama of the spreader bars”, which led Francis Le Goff to delay the start of the third stage, but other problems arose, especially the sealing of foil apertures and gennaker sheaves. “Beneteau and the suppliers were quick to react, realising the entire fleet would be affected and not only one, two or three boats, and that if these problems were not resolved, it could compromise the Solitaire du Figaro,” said Beyou. With Yann Eliès, Corentin Douguet and Pierre Quiroga (the latter representing the class), the skipper of Charal was part of a working group specially which met with  three representatives of the Beneteau Group: Gianguido Girotti, General Manager, Luc Joëssel, Sail Product Manager, and Hervé Roth, Customer Service Manager.

Since then, the meetings have been ongoing until Thursday in Nantes resulting in proposals: Sparcraft is committed to providing one piece spreader bars to the entire fleet at the end of the Solo Maître CoQ and Beneteau has found solutions to the problems of the seals and sheaves. The whole episode has revealed a need to step up the professional management of the class, especially on the technical side. Someone to look after the technical aspects will be recruited to operate at least until the end of the season. Several individuals have been contacted and the appointment should be announced this week.