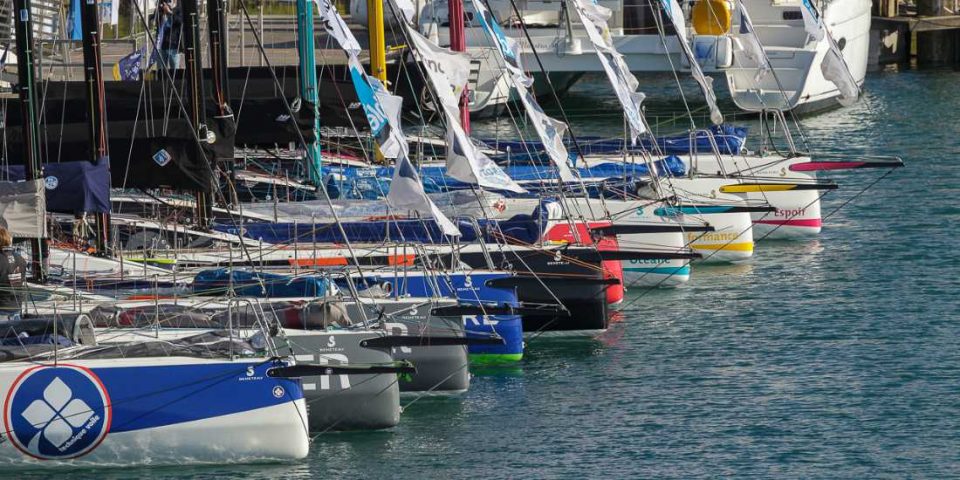 The 51st Solitaire du Figaro starts on Sunday from the Bay of Saint-Brieuc and finishes on September 20 in Saint-Nazaire. As before every big race, Tip & Shaft examines the field in the exalted company of a pool of experts, in this case the race director, Francis Le Goff, the last three winners, Nicolas Lunven, Sébastien Simon and Yoann Richomme, but also François Gabart, Jeanne Grégoire, coach at the Finistère race training group at Port-la-Forêt, Tanguy Leglatin, coach of the Lorient group, and the well placed Irishman Marcus Hutchinson.

On form…
The argument about who has the best recent form is the argument that cuts the mustard with many of our experts, influencing our final podium (see our TOP 5 below) especially the two solo sailors who shared first and second places on the Solo Maître CoQ and the Drheam-Cup, that is to say Tom Laperche and Sam Goodchild. Laperche the young skipper (23 years old) of Bretagne CMB Espoir, winner of the first event and second in the second, is the most often quoted (six times, including one in first place), so winning the votes of our experts.

Sébastien Simon, who preceded him in the Bretagne CMB programme, admits to being quite amazed: “For his age, he already has a lot of experience as he has sailed a lot with his father and he gives off a sort of quiet confidence, he knows what he’s doing and where he’s going. ” Jeanne Grégoire is of the same opinion: “He has a maturity beyond that of a young person of his age, both technically and in his overall vision of his project, and he never gets upset.” As for François Gabart, when asked if we are dealing with a future great, he responds: “Perhaps, but many sailors would already like to have done what he has accomplished in just 18 months in the Figaro. He had a good Solitaire last year, showing some pretty impressive consistency for a rookie, sure he’s one of the favourites.”

Second in the Solo Maître CoQ and winner of the Drheam-Cup on his return to a circuit he left in 2014, Sam Goodchild finds himself on the third step of our podium. Marcus Hutchinson believes that not just with him, but also with Alan Roberts (second in the Solo Guy Cotten), with Phil Sharp and Jack Bouttell, “we have never had so many non French sailors of such a high level in Solitaire“. For the Irishman Hutchinson, the skipper of Leyton Goodchild “can create a surprise”: “When he arrived on the circuit [in 2011], he was this young guy who dreamed of living off his passion; today, he has become a real professional, he got married, he is stable in his life, everything is very structured in his head. “ For Tanguy Leglatin, “Sam has sailed a lot in recent years, in multihulls [Spindrift, Sodebo, Multi70], in the Mini and in Class40, with some very competent people, he has a good ability to absorb information and then use it.”

Yoann Richomme considers that the passage of the English sailors through Class40 is an asset: “Class40 is very close in terms handling of the Figaro 3 and so it is a good school, I think that it helped me a lot to build my victory last year [he had a Class40 season in 2018 and won the Route du Rhum, Editor’s note]. ” Jeanne Grégoire also underlines that “Sam trained a lot last winter with Pascal Bidégorry who is a very good tune-up guy. We see that he found the little tricks quickly when you would expect him to be still discovering the boat.”

In this category of sailors on form our experts also highlight Pierre Quiroga, the most consistent sailor over the three pre-season races (4th in the Solo Maître CoQ and 4th in the Drheam-Cup, winner of the Solo Guy Cotten). “He is in a good place, he enjoys sailing, he knows how to sail the boat fast, he has all the assets needed to win the Solitaire”, analyses François Gabart whose MerConcept structure manages the Skipper Macif 2019 project. For Tanguy Leglatin, “Pierre had lost confidence a little over the past two years, now we have the impression that he is once again taking responsibility for his choices, as he did when he made his debut in Figaro.” Pierre Leboucher is also seen as a potential winner: “He is now more mature on the circuit and he performs very well in terms of pure speed, especially downwind under gennaker. If he manages to string together four stages he can really become a contender, “confirms Jeanne Grégoire.

The past winners, the changing of the guard?
They are two former winners in this 51st edition: Yann Eliès, triple winner (2012, 2013, 2015) and Armel Le Cléac’h, who won twice (2003 and 2010). For our experts, the Banque Populaire skipper, whom they place on the second step of our podium has the most cards in his favour. “He’s been engaged in a programme he has built since last year, he’s only focused on La Solitaire from his sailing perspective this year. I’ve seen him come back from training in 25 knots and see him still super  sharp and calm “, sums up Francis Le Goff. Of Le Cléac’h who finished seventh in the Solo Maître CoQ and third in the Drheam-Cup Tanguy Leglatin adds, “I have the impression now that he has been able to adapt his strategies to the ways of this boat, he has made good progress since last year. “

As for Yann Eliès, his average results this season and a somewhat late preparation does not put our  experts off him: “On the Solo Concarneau, we saw him in the lead several times, this is proof that he is still there, you can still bet on him”, comments Yoann Richomme, while Jeanne Grégoire believes that the performance of the sailor who grew up on the Bay of St Brieuc will depend in part on the weather conditions: “If they remain physically manageable, he will be in the mix, as we saw in the light stuff on the Solo Guy Cotten, he avoided all the traps, he was impressive. If it’s muscular, it can be more complicated: we see in the guys at the finish of the races or when we do a really tough intensive three days here those who are a bit older often score higher, and yet they are physically fit guys. The boat is physical, everything is hard and it gets very wet.”

So is this Figaro 3 too physical for the 40-year-olds? “It’s tougher than the Figaro 2, but these are guys who do the Ultimate and the Imoca, much bigger boats where mistakes are punished, so I’m not at all worried about them, when you have to carry the spinnaker in 40 knots, they won’t be asking any questions, “replies Nicolas Lunven. Francis Le Goff says of Yann Eliès: “He is not necessarily in the best condition in terms of prep, but he is never as strong as when he is a little bit on the ropes. I also think he has leading the record for the number of stage wins [which he shares with Jean Le Cam, 10, Editor’s note] and that is certainly a goal for him.”

The hardy annuals…..
The regular reliables, the old faithfuls of of the Figaro circuit for a few years, Anthony Marchand, Alexis Loison, Gildas Mahé and Corentin Douguet are also seen as podium contenders, Jeanne Grégoire highlighting their experience: “When you prepare the roadbook of La Solitaire with these guys, you see in their eyes that they visualize the places and the things that have happened there, they have a perspective that the younger ones don’t have and which gives them huge strength, especially since there will be many technical techniques on this Solitaire. ” The best of them is Anthony Marchand, 2nd in 2018 and 3rd in 2019, despite reduced scope for preparation this year due to the crisis that affected his sponsor. “He returned to the Solo Concarneau without having sailed a lot and was straight on to the podium; clearly he is one to be reckoned with,” confirms Sébastien Simon. Yoann Richomme adds: “His project is a bit more complicated but he is still here, he hardly makes any mistakes and he comes with a bit of detachment and without too much pressure, a bit like me last year. “

His friend Alexis Loison is only mentioned once for the podium due to his preparation being disrupted by a knee injury but just like Gildas Mahé has been in the top 10 of the three pre-season races. Tanguy Leglatin finds him “very confident, very serene, he sailed a good Solo Guy Cotten at the front all the time, he’s still someone who has all the keys to the boat.” Finally, Corentin Douguet is seen to offer good odds, Francis Le Goff saying: “Will he ever stop having a little bad luck? He was already good last year, he was near the front and then again this year on the Solo Maître CoQ and Guy Cotten but missing out each time, if he turns it around, it can be his year.“

Not only but also….
The last two sailors named by our experts looking to the podium are Adrien Hardy and Xavier Macaire, are classified for their unique way of sailing. Two skippers of whom Nicolas Lunven says: “No matter his preparation and his pre-season results, Adrien will always be very dangerous on the water, he is capable of doing some pretty incredible things, he can still work well, work very hard and Xavier, he’s a guy who also thinks outside the box, who can get himself out into corners with an interesting success rate. When you see Xavier or Adrien on the tracking starting opposite the fleet, you wonder what that they found and what you did not see… ”