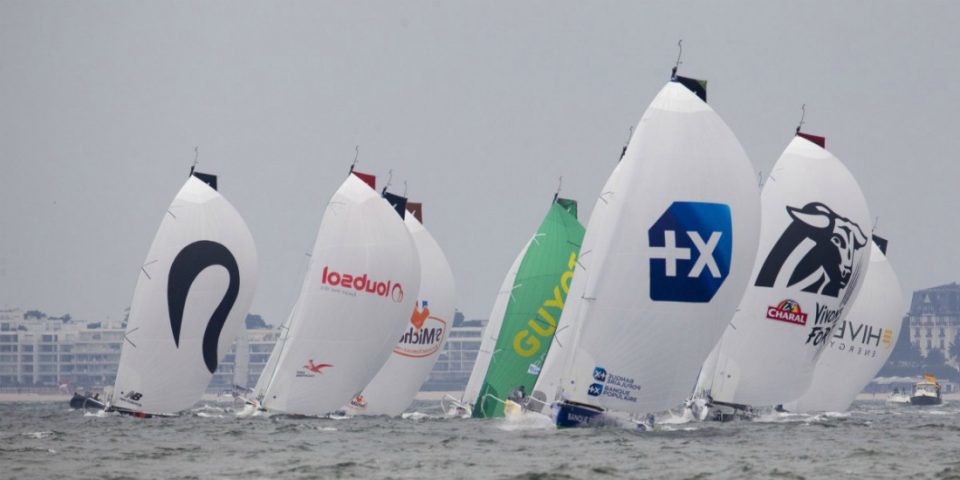 So 47 sailors will go on Sunday on the first of this year’s four stages of La Solitaire Urgo Le Figaro. The arrival of the new Figaro 3, “opens the game” for all our commetators who all really did dissect the field and individual strengths and weaknesses before delivering their forecasts. From their deliberations three names stand out clearly: Armel Le Cléac’h (chosen nine times as a podium finisher three times as overall winner), not far behind is Xavier Macaire (eight / three) and Yann Eliès (seven / two). They are three winners of the pre-season races, the Solo Concarneau-Trophy Guy Cotten for Le Cléac’h, the Solo Maitre CoQ for Macaire and the Sardinha Cup for Eliès.

“I’m amazed by Armel’s level, from the beginning he showed that he was in the game, he is very impressive and clearly does not fear anyone,” notes Sebastien Simon last year’s La Solitaire winner. “He has a particular impetus this year which we often find among the winners of the Solitaire. Probably because he has not a big win since the Vendée Globe, he is hungry for it,” adds Paul Meilhat. Charlie Dalin thinks that the double winner of the Solitaire (2003 and 2010) “ticks a lot of boxes: he is physically strong, is used to the faster, bigger boat and is at home on this format of the Solitaire”.

Many people believe that the physical requirement  will be an essential element for top performance on a boat which is universally deemed more demanding. “This is a factor that will be so much more important than on the Figaro 2, especially if you look at the course, really other than the first stage, there are many short legs on which you don’t really have the time to recover with a lot of sail changes and weed to remove, not to mention the stacking on a lower deck which is more difficult, “confirms Charlie Dalin.

Coach Tanguy Leglatin adds. “It will be necessary to choose the times when it will be worth taking risks and when to steer because there will be gaps to be opened at key times but at the same time, you have to manage to be good overall four steps. That will be almost more important than pure performance, the gaps caused by fatigue can be significant.”

For Paul Meilhat, the experience of other sailing including bigger boats, can be important especially in the breeze: “Psychologically, it will be more unsettling than the Figaro 2, you can get yourself into trouble. This boat has a greater capacity for acceleration, in 20 knots of wind  you realize that you are going much faster as soon as you have more sail up. There can be fully 3 to 5 knots difference between someone who will put up the big spinnaker when others are under small spinnaker, for example. I think that in strong wind only a very few will be able to hold this and make it work. They might well be the the ones who have the experience of the big boat and so there can be an advantage over others.” Pascal Bidégorry confirms: “Having experience on big boats does not hurt: when you have managed big sails and lots of power, there is not much that unsettles you on a smaller boat”.

Contrary to that theory Xavier Macaire has only done a little, on an IMOCA, but it is his ability to perform on the Figaro 3 (third in the Sardinha Cup and winner of the Solo Master CoQ) which excites our observers. “Xavier is sharp, he quickly got to grips with the boat, he was comfortable faster with the Figaro 3 than on the 2″, analyzes Denis Hugues. Frédéric Pelatan believes that the skipper of Groupe Snef “has the knife between his teeth, he has this Solitaire to win after having been so close so many times.” For Paul Meilhat, however, everything will depend on the conditions: “If there is a breeze I go with Xavier Macaire, hard to beat. If it is a light winds La Solitaire I go with Yann, because he has a very  special feel in these conditions.”

His feel is an asset which, in the eyes of Sam Davies, will be an essential ingredient to perform on a boat that everyone is still discovering: “Nobody has written the complete bible for how to make the boat work perfectly and we know that the settings will still really evolve during this Solitaire. Those who are going to make the most progress between the first and the last stages will have gained the  advantage. I think that sailors who come from Olympic sailing have this feeling. I know Yann has it: I sailed with him on the Sardinha Cup, I felt that as soon as it was night, we were better, he just did not seem to need to be able to see. ”

Sébastien Simon puts forward the highly competitive mindset of the skipper of StMichel: “Yann has an incredible head for the game, he has talked openly of his ambitions to win and often, when he says that he does it. ” Simon, winner of La Solitaire 2018, likewise made an impression with his openly ambitious speech last year, reveals: “It’s Yann who inspired me to do things this way: he loves to play this psychological game, I think it’s important. ”

Charles Darbyshire believes “Yann excels on the Figaro format, it is his discipline”, Pascal Bidégorry concludes: “He seems to me one of strongest, he is almost clairvoyant, builds up his legs well, is never extreme, always head out of the boat, and he always manages to to profit during the the key transition phases. ”

After this projected podium there are many underdogs. Seventeen other skippers have been mentioned by our panel three stand out, Adrien Hardy, who, despite limited means, “has the profile of an attacker that suits this Solitaire” (Tanguy Leglatin who adds Eric Peron to this profile), Anthony Marchand of whom veteran journalist Serge Messager says: “He had two stage victories last year, he knows this is a turning point in his career and that a victory might be what allows him to move on to a big project. ”

The other most mentioned outsider is Martin Le Pape who, by winning the long race of the Solo Maitre CoQ and finishing second in the Solo Concarneau highlights his potential: “I have the impression that he made the step up,” confirms Sebastien Simon, while Charlie Dalin believes that “his strong point, in addition to his speed, is his fitness, he is one of the most physically fit and strong  in the field and that will be important.”

Also tipped for the podium is Morgan Lagravière, who “has the urgent need to re-establish himself the top level of the offshore scene. He has been consistent since the start of the season and has what it takes. ” (Frédéric Pélatan) Also Alexis Loison, who Sebastien Simon sees “much stronger mentally than the on other years, ready to get up there”, Gildas Mahé, “someone very intuitive who sails a lot according to the fee and can make the Figaro 3 go in all conditions “(Nicolas Lunven), and Jérémie Beyou who Serge Messager finds” sharp as when he was 25 years old and who has nothing to prove “.

“Yoann Richomme does not have the experience of the boat yet because he took over the project late, but he has the level,” adds Paul Meilhat, and Serge Messager says about Pierre Quiroga: “He is so talented and has arrived to Port-La-Forêt which has undoubtedly allowed him to work on his weak points. ” Also named is British Alan Roberts about whom Charles Darbyshire says: “Alan is due a result, he had two good legs last year, one bad manouevre then had to do a buffalo girls go round the outside on the last leg to try and recover but he has the skills”.

Rookies or ‘bizuths’ our experts quote the same three: Benjamin Schwartz, Achille Nebout and Tom Laperche, “who can also be up there in the general classification”, notes also Nicolas Lunven. “For me, Benjamin Schwartz is even a big outsider for the the general, adds Frédéric Pelatan. “He has been under the radar for years, but we see that it has been very consistent since the beginning of the season. ”

Tanguy Leglatin, who coaches Schwartz in Lorient adds: “Benjamin is hard to beat he is physically and mentally strong, but I must admit that Achilles also really impressed me in his way of sailingand in everything else while he had his Figaro very late.”

What about the “golden fifties”, Michel Desjoyeaux, Alain Gautier, and Loïck Peyron? No one sees them on the podium or in the Top 5, but Loïck made an impression on Solo Maitre CoQ (11th): “Loïck has a different approach, always happy to push and not the kind not to put the boat first but he  remains an excellent sailor, I am impressed by his longevity “, says Denis Hugues.

Nicolas Lunven cites Michel Desjoyeaux, despite his abandon in the Solo Concarneau:  “The last time he did the Solitaire (2013), he was not impressive in the pre-season races but still in the game on the Solitaire (7th). I am wary of the old fox who on a stage like that between Nantes and Kinsale, can leave the pack because he knows that it will not be about a perfect gybe but about positioning on the race course.”