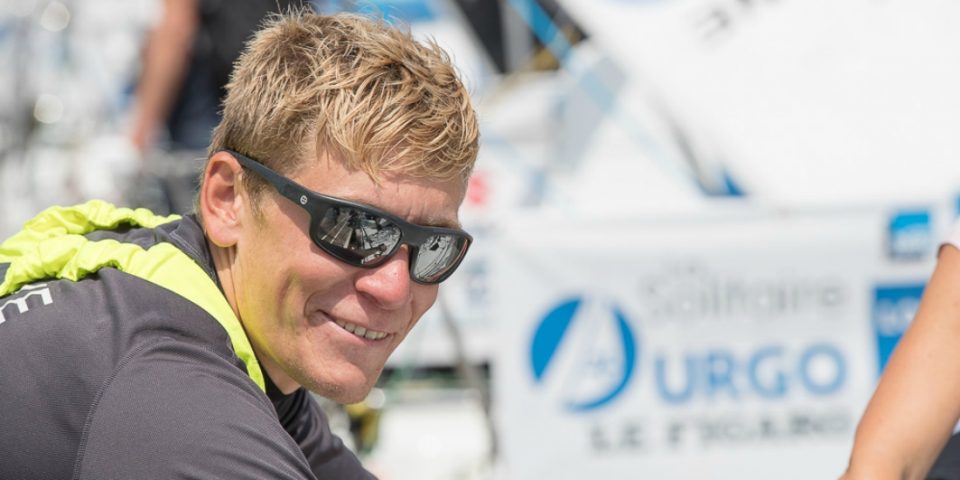 Will Harris: “This Solitaire was pretty exceptional”

British solo racer Will Harris marked himself out as a talent for the future on the just finished La Solitaire URGO Le Figaro. The skipper of Hive Energy often proved able to sail with the leading group, made some good recoveries and after the same bad leg to Kinsale that so many of the top seeds endured, came back with a 12th on the second leg and seventh on the third leg. On the last leg he was leading on the approach to the Owers mark before the breeze died completely. As a second go at La Solitaire, after finishing top rookie in 2016, this was an impressive, mature attempt which saw him finish 22nd. Tip & Shaft caught up with the 25 year old from Surrey as he emerged from the skippers’ debrief in Dieppe on Thursday.

So Will what were the key discussion points at the skippers’ debrief?
I think one thing which stood out was the everyone was a bit unhappy about the courses that they chose. And the other thing was the provision of the weather. One thing which was obvious was that in this instance it’s difficult because of the way it was read. On the VHF it can be quite bad sound quality. And (in French) the difference between West and East is very similar. So, if you heard North North West  (NN Ouest) and you think, ‘ok great, I’m good to be in the West’ and then it’s actually North, North, East (NN Est). That did completely change the situation and a lot of people heard the wrong thing so you needed to be really careful. It’s such a simple thing and suddenly people are eight hours behind. Everyone wants a more detailed forecast I think, such as a GRIB file. But that is  impossible to do because then it gets into the things like receiving data. As far as I could understand there wasn’t really a conclusion to this apart from maybe to try and find a different partner. The forecasts were nearly always out. And MeteoConsult is basically your day to day French weather forecasting. We need a much more detailed winds perspective so a lot of the forecast were pretty wrong.

And the questions over the courses?
I think the thoughts on the third leg were the same. Alain Gautier was saying  ‘who chose that thing?  It was riskiest most dangerous leg we could have done.’  We had to go through an extremely strong tidal gate with not much wind followed by going round the Minkies and basically we hit the raz de sein and Ushant as well. Basically choosing all the most tidal and dangerous places and putting them into one leg and I think that’s a bit of insanity. With only one or two marks, six boats hit the bottom and we were lucky it wasn’t that windy because it could have been a much worse situation, trying to go round Ushant in thirty knots with the tide against and you can have absolutely massive waves there and I think they will definitely look at the courses after that. They could maybe put one (tidal gate) of them in at a time but you don’t want to have three in the same leg because it’s just the most dangerous parts of the world to sail in and everyone gets pretty tired.

It’s not a defence but Tom Dolan made the point that had there not been a General Recall then more would have made it?
Ten minutes made all the difference. I hadn’t really considered it at that point. But me, I do think that’s what part of offshore sailing is- racing in these sorts of waters and so it’s a really tricky balance. If you push it too hard then you end up with lots of boats out of the race because they have gone and smashed their boats up and things like that. But also at the same time we got the biggest bit of media with Yoann and Tanguy trying to get through the rocks and that’s what makes the race exciting. That leg was where the most media was seen ? We do have to try and create interest in the race. The other question is the idea of the Solitaire is to leave it as open as possible, as few marks as possible. But if you are going to sail in places like this then you do have to put a few more marks in and make it a bit less crazy. I love sailing these parts but obviously with what happened to me earlier in the year I was taking zero risks. It’s a tricky balance.

What’s your own view of the race now, 24 hours after and with the benefit of some sleep?
I think this Solitaire was pretty exceptional. You could have a lot of local knowledge of the overall thing- for example, I’ve done a lot of sailing in the Channel and when the wind was consistent I proved I was quick but the thing that was exceptional about this year is that the weather was so insane. It was so unpredictable and irrational. You couldn’t have any forecast that could predict what was actually there. I think that added so much randomness to the race as a whole which kept it interesting but at the same time it’s very frustrating to race like that. The people who were fast and had seemed to work hard to make sure the boats were fast weren’t getting paid off. It was the ones that were taking the risks and taking the chances that were getting the dividend. For me, the Solitaire has always been about who knows how to sail this boat as quickly as possible and who knows how to manage it and that’s definitely not what this race was. I mean that makes it really exciting and interesting to race but it’s frustrating when you have worked hard and you can just watch your leads disappearing just like that. But again that’s part of offshore racing. I’d have loved a top ten result, I felt like I was fighting in that packet for a lot of it and I felt like I was up there. There was two legs where I was pretty much top ten and I was fighting amongst that group and the other two I was fighting in that group as well and it was due to big random moments in the races where I lost out a lot. I think I would go into the next one saying just take the risk and if its your year and if it’s not, it’s next year- just take the risk and get out there in the fleet a bit more and trust your gut because you’re not going to win the Solitaire just on being quick, you’re going to win it based on making decisions that not everyone else does.

Regrets? Do you have a few?
Mainly the first leg because it cost so much. But you see a bunch of good guys tack and go West and it was hard to go on. Just because the other boats were tacking off, I should have considered the weather a bit more myself and gone with what I saw. Basically I think if I don’t know what’s going on with the weather I should just sail the closest tack to the next mark and that would have been to carry on North and not to tack off at that time. It’s very interesting but you do have to think for yourself. Especially on this race, you almost threw away your forecast after 24 hours. I remember doing that in the Solitaire last time and then I was still trying to look at it three days later. This time it was like you couldn’t look at them because they’re not right and the forecast had changed because the weather was so unpredictable.

Explain for those who don’t know, what weather do you get given?
They split the course up into five or six different sections and they’ll give you a general forecast for all of that at different times but you couldn’t do a routing off that or anything. You either try to verify your GRIBS and isobars with that forecast or you try and look at the situation overall and throw away your GRIB and go on what they are saying. None of the weather situations were stable though, there was never a big low which defined the weather for the three days. Instead there were such small features, small depressions and high pressures that would pop up and that’s what the weather situation has been for this month and its complicated but really interesting.

And how did your Doyle Sails work out?
I was fairly happy in the end actually, I was very worried going when I started the year going into it because for example my Doyle mainsail has three more full length battens then any other ones and also weighs nine kilos more than any of the others fleets so straight away I was like this is pretty terrifying. But I don’t have the budget to get another one. In the end I think I have learned you can trim the mast and trim everything to make the mainsail look like what you want and I think I have actually learnt well on how to trim the sails. For sure we were at advantages with our genica which was pretty good and I got a new J2. And that was much fuller and that kind of helped the whole light wind situation where my mainsail was pretty light as well. The thing is with the kite is I got a north one and it was amazing, it was incredible and it was much flatter and stable and that is definitely where I found my speed which I’ve never had before. Everyone had very different sails but there is so much more to how you sail the boat than the sails, you can spend a lot of time trimming the sails but if you don’t have the mast set up right or stack in the right place or the rudders trimmed right, there is a lot to it you can just have the best sails and then be quick you have to get everything else right.