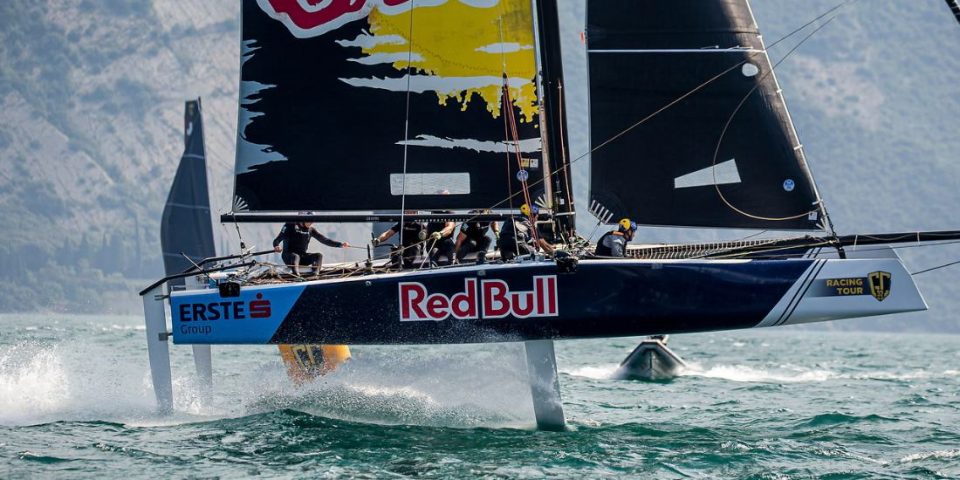 The GC32 Racing Tour wants to take off

After what transpired to be an enforced year off due to Covid, next week the GC32 Racing Tour resumes with the first of the season’s four planned events in Lagos (Portugal). Six teams are due to be on the starting line, a smaller participation than the previous years, but this is fully expected to strengthen during the season. Tip & Shaft takes stock of this circuit which is an interesting mix of owners and professionals.

In terms of foiling the GC32 Racing Tour is a pioneering circuit which was launched in 2015. And so Lagos lifts the curtain on its sixth season at the end of an empty 2020, despite the attempts of circuit director, Christian Scherrer, to save what could be saved: “We tried to organize two events, in Lagos and Lake Garda, but with the limitations imposed on international travel, we were never going to run a three-boat event, so we canceled. Inevitably it was a complicated year, we spent our time making plans B and C, it was a lot of work to finally achieve next to nothing. “

Announced last December, the program for the 2021 season also had to be updated: “We should have started earlier than this, in fact back in April in Port-Camargue, then on to a second event in Riva del Garda, but we still had to adjust our plans. We tried to be pragmatic and do something simpler and more focused, also with the aim of not spending too much money because last year was complicated, “continues the Swiss director Scherrer.

This season will comprise four events (compared with a usual roster of five), the first two both in Lagos, Portugal (June 30-July 4 and July 28-August 1), the third, the world championship, in September in Villasimius (Sardinia), the fourth in November on the salt lake at Mar Menor, in the south of Murcia (Spain).

According to Christian Scherrer the overall budget of the GC32 Racing Tour is of the order of 500,000 euros (excluding goods and contributions in kind and services from the towns/cities). This is financed by entry fees (10,000 euros per event which equates to 40,000 for the year for teams that do the whole circuit), but also by host cities even if this contribution will undoubtedly be readjusted a little this year. “Normally, there is a venue fee of 60,000 euros and other services, but in the current context, it is complicated to ask something of the cities which necessarily have other priorities,” explains the organizer.

For the participating teams, a mixture of owners and professionals (who are in the majority this season), Christian Scherrer suggests an annual operating budget “of 400,000 to 500,000 euros”, knowing that a second-hand GC 32 is somewhere between 150,000 and 200,000 euros, no new builds being made. That range is in keeping with that confirmed by the teams we interviewed: at Alinghi, it amounts to 320,000 euros “excluding salaries”; among the young guys of the Swiss Foiling Academy, it is more modest, of “300,000 Swiss francs” (about 275,000 euros) according to co-skipper Julien Monnier; for the Black Star Sailing Team, a Swiss team that he launched in 2019, Christian Zuerrer (11 participations in the Tour Voile) estimates expenses at around 400,000 euros for the season.

Teams which, for the opening of the season, are six in number (there are 27 boats in the world), as in 2019. However, it is less than in 2018 (7 over the entire season) , in 2017 (9) and in 2016 (11). “It’s a small fleet, but it’s a good base,” says Christian Scherrer. “Because of travel restrictions, these are only European teams, for the second part of the season, especially for the World Cup, we should have the Americans (Argo), Australians, the Swiss from Team Tilt, and probably two or three others, I think we should have ten boats at the world championship.”

Absent this season, Sébastien Schneiter who was the 2018 world champion on Team Tilt (Alinghi was crowned in 2019) confirms a probable visit to Villasimius: “This year as we will be at the Games in the 49er, it was not all possible, but we hope to be at the world championship. The GC32 remains a good option with simple boats, great teams on the circuit, good visibility for sponsors and the ability to bring guests on each day of competition. “

Sébastien Rogues: “This is where I opened my account”

Indeed, despite its age (it was launched in 2014), the GC32 remains an attractive boat especially in the eyes of those who are loyal to the circuit. “Even compared to newer boats, it still has a great part to play, we call it our scooter.” says Thierry Fouchier, mainsail trimmer with the Zoulou crew, led by “owner-driver”, Erik Maris. ” It’s really a nice and fairly complete all round boat, we are all hiking hard in the straps, it’s very physical and it requires a lot of coordination in the maneuvers. Let’s just say that when you come home in the evening, everyone is knackered.”

Alumni of the circuit where he spent three happy years in the colors of Engie, Sébastien Rogues who is now at the helm of the Ocean Fifty Primonial, remains full of praise for the boat and the tour: “In terms of adrenaline, technique and especially learning to foil – which was for us the main priority for our participation on the GC32 – this is where I opened my account. The boats are amazing, we used to be at 35 knots downwind trying to pick an exact lay-line. You might think from the outside that this is an ‘owner’s circuit’, but the level really is very high.”

“What I appreciate on the GC32 is the strict one design aspect, it is real time, head to head sport, it’s the team that makes the difference, not the size of the budget or the technology of the boat”, adds the Swiss racer Christian Zuerrer. His compatriot Nils Frei, now the coach at Alinghi after being part of the crew since the early days back of the GC32 team in 2015, agrees: “It’s a boat that we really appreciate, the one on which we learned to foil together on this team. It’s sporty, fast, fun and easy to set up, you don’t spend a lot of time putting it all together and breaking it down. And above all, it allows you to race at a good level, there is not anywhere with as many races on a foiling circuit.”

Among the six teams competing, three are from Switzerland

Like Zoulou, Alinghi this year combines their programs for both the GC32 Racing Tour and TF35 Trophy, two circuits which try to complement each other and so avoid date clashes: “There are discussions between the two classes to agree on the calendar.” Confirms Nils Frei. “They are two quite different concepts of flying but you can learn things about one that you can apply to the other and vice versa. There are still two foiling boats that go fast and where communication is extremely important.”

Thierry Fouchier adds: “The two circuits are complementary in terms of the requirement of cohesion they require, on the other hand, the TF is a new concept with a boat that flies upwind very early and an automatic flight system; in GC32, the flight and elevation are adjusted manually, there is more human feeling. “

Among the six teams competing this season, three are from Switzerland (Alinghi, Swiss Foiling Academy, Black Star). Is that a coincidence? “Foiling has really developed a lot in Switzerland,” replies Nils Frei. “Our waters don’t see too many waves on the lakes and thermal conditions allow the boats to fly early so we are well suited to foiling. People have seen the GC32s evolve, they have been impressed and have taken a liking to it, like Realteam, Tilt, Black Star now.”

And Swiss Foiling Academy, the newcomers of the 2021 season arrive with a project aimed at young people and diversity: “We have set up a school for flying boats to pass on our knowledge to young people who do not necessarily have the means to do this, so offering access to this type of boat and to find and develop new talents, explains Julien Monnier. “The basic idea was to provide a feeder system for crew for the TF35, but as the budgets there are quite high, we said to ourselves that before bringing younger sailors on to such machines, they had to be taught to sail on 100% manual boats, the GC32 is the step above the Flying Phantom, on which we started. We want to stay on the circuit as long as possible, it’s really a great opportunity to rub shoulders with professional teams, like Alinghi or Red Bull.”

Nicolai Sehested: “As a new team with a long-term
plan and vision, this is a great opportunity”

Newcomers this season are also the Danes of Team Rockwool Racing who are on the SailGP circuit but also rely on the GC32 Racing Tour to increase their flying hours, as its skipper Nicolai Sehested explains to Tip & Shaft: “As one of the newer teams in SailGP, we are on a steep learning curve and we know that we can’t close the gap to the best teams without doing more – and the GC32 Racing Tour is the perfect opportunity for us to hone our foiling skills in a fast boat, and importantly, test ourselves against other top teams and sailors, in racing conditions. We see the GC32 tour as a great way to improve and get time on the water to build stronger foundations for our time in SailGP. As long as that’s the case, and we see that it gives us great competition and a platform to improve in a sustainable way, we will of course be interested in being a part of it. For us, as a new team with a long-term plan and vision, this is a great opportunity.”

But this does not appeal to other SailGP teams, like the French team for whom the GC32 does not really appeal according to its team manager Bruno Dubois: “It works for some like Rockwool and maybe the Spaniards because there is going to be an event at home, but I think it’s quite different from the F50 and a lot of our guys prefer to go to the Moth World Championship on Lake Garda.”

For Thierry Fouchier, the solution to attracting F50 teams could be through an evolution of the boat: “The only thing that the GC32 lacks is to fly upwind, it is fashion now, it could be an evolution. A natural thing to keep the boat current.”