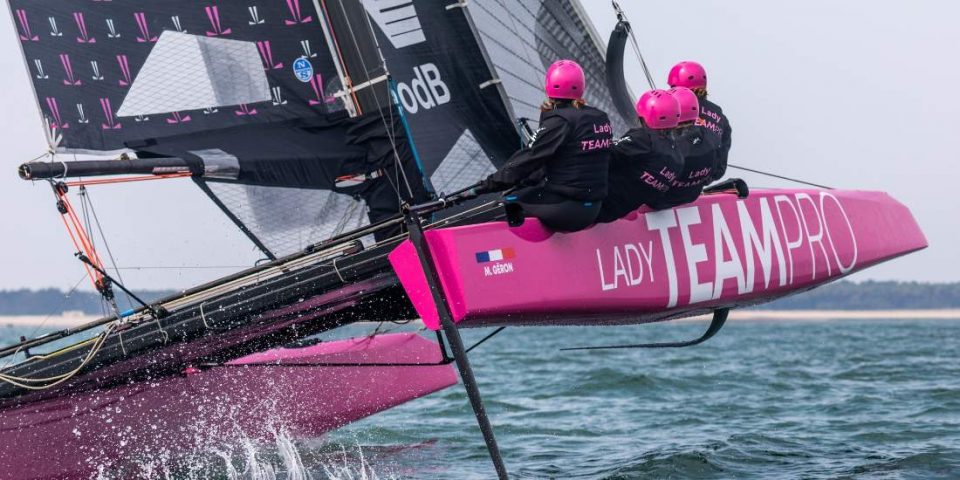 On the Market: A new all-female crew in ETF26 Series

RICHARD MASON, ELIOT MERCERON, JULIEN ROLAZ and JÉRÉMY BACHELIN join the Swiss SailGP team which is making its debut on the circuit in season 3.

SÉBASTIEN AUDIGANE is now the boat-captain and coach of Guirec Soudée for the Vendée Globe 2024.

ALEX BRAVO, a Mexican sailor wishing to embark on the Class40 circuit, is competing from Saturday in the Roma Per Due with Kito de Pavant on HBF – Reforest’Action.

FABIEN DELAHAYE has become the agent in Brittany for the Italian sailmaker Soluzioni Tessili Rigging.

THE CHARAL SAILING TEAM, as part of its Vendée Globe 2024 project, is looking for its on board reporter: creation and editing of content, participation in team events and PR and general public activations a permanent position, based in Lorient.

GURIT, to join its composite structural engineering office in the UK, is looking for:

SAIL ON SEA is recruiting an experienced boat captain for Damien Seguin’s Imoca Groupe Apicil; a position to be filled now, based in Lorient.

MER FORTE is recruiting a draftsman/designer for its design office; fixed-term position from 3 to 6 months, which can evolve into full time contract based in Port-la-Forêt.

ARMAND GASTEL who is training in mechanical engineering at the Polytech Sorbonne, is looking for a work-study program for 36 months from the beginning of September in the field of mechanics, ideally within a design office.

THE ROUTE DU RHUM-DESTINATION GUADELOUPE 2022 will muster 138 solo sailors: the names of the first 120 registered were revealed on Wednesday, 18 wild card invitations will be awarded by the end of April.

SODEBO, already the main sponsoring partner of the Vendée Globe, has also committed itself as a major partner of the 2022 Arctic Vendée and the 2024 New York Vendée.

SUZUKI will be on the 2022 edition for the third time official partner of the Route du Rhum, supplier of the automobile and marine fleet of the organization.

FREELANCE.COM has signed up as the title partner of the adventurer Guirec Soudée for the Vendée Globe 2024.

THE SOLANO GROUP, which specializes in transport and logistics, has signed up as official sponsor of Alan Roura until 2025, as has the bank BONHÔTE & CIE SA, which will support the Swiss for four years.

CONRAD COLMAN announced this week that he has acquired the former V and B-Mayenne, with which Maxime Sorel raced in the last Vendée Globe. The New Zealander is looking for partners to accompany him on the 2024 edition.

11TH HOUR RACING TEAM has partnered with the Save the Med Foundation on a project whose objective is to regenerate the marine ecosystem of the Formentor area, in Mallorca.

THE 52 SUPER SERIES are committed from the 2022 season to the Kick Out Plastic association.

PANERAI has renewed its partnership with the Italian Luna Rossa Challenge in view of the 37th America’s Cup.

SUNGOD, eyewear brand, is committed as official supplier of the British challenge Ineos Britannia and the English SailGP team.

THE SP80 PROJECT unveiled this week the final design of the machine powered by a sail, which will be launched at the end of the year, on which the objective is to exceed 80 knots. The first attempt is scheduled for the summer of 2023 in the south of France.

THE 2022 FOILING AWARDS, organized by Foiling Week, will be awarded on April 28, the list of nominees is here, votes are open until April 14.

THE GLOBAL SOLO CHALLENGE has partnered with the certification body TÜV Thüringen Italia to verify its compliance with the ISO 2021 standard, which aims to help organizers make events more responsible. The race also recorded its 44th and 45th entries: the Turkish Volkan Kaan Yemlihaoglu and the Belgian Edouard De Keyser.