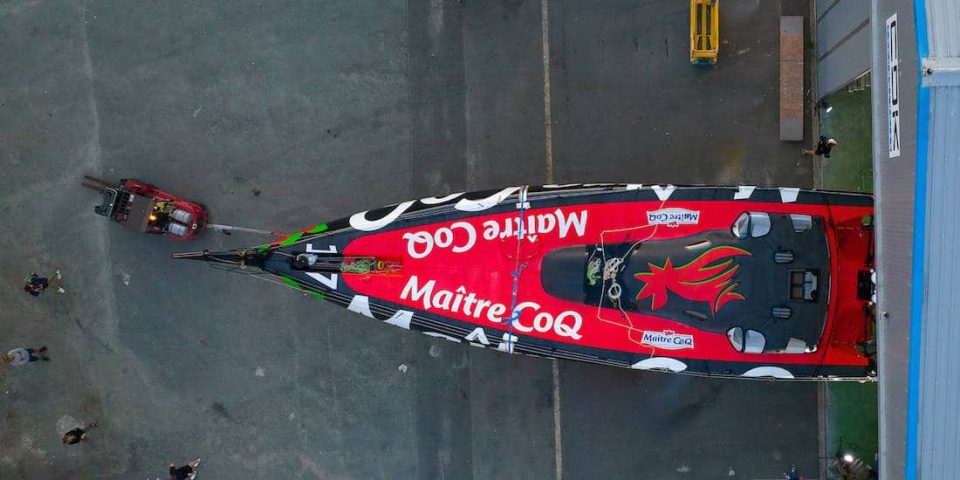 On the Market: Maître CoQ and Biotherm launched

EMILIE MARTIN joins the Tip & Shaft crew! After a tour of the Atlantic by boat, she arrived at our Lorient offices on Monday, as project manager for Sailorz, the first streaming platform dedicated to competitive sailing.

PAUL MEILHAT revealed on Thursday the composition of his crew for The Ocean Race 2023 aboard his new Imoca Biotherm (launched on August 31): Damien Seguin, Anthony Marchand, Guido Bertelli, Amélie Grassi, Mariana Lobato will accompany him and, as onboard reporters, Anne Beaugé and Ronan Gladu.

ANNE-CÉCILE TURNER, who has been leading The Ocean Race’s sustainability program since September 2016, is now campaign director of Sails of Change.

SAIL TAHITI, Beneteau, Excess, Neel dealer in Tahiti, is looking for a technical manager/fleet manager/skipper; BC200 diplomas or federal instructor cert required, as well as experience of transoceanic navigation and technical skills in composite materials, English essential; full-time position based in Tahiti.
CYCLOPS MARINE is recruiting a sales manager, fluency in English and French required; part-time or full-time position, based in Port Solent (Portsmouth) and/or telecommuting, with travel.WINDELO CATAMARAN is looking for the development of its teams in Canet-en-Roussillon (fixed-term and permanent positions):

LOUIS HUCHET, who has just finished a Master of Engineering/Ship Science at the University of Southampton, is looking for a permanent contract in a design office (teams, construction sites, America’s Cup, etc.) to an engineering position (performance, composite, mechanics, hydrodynamics).

SAILORZ, the first video-on-demand platform dedicated to competitive sailing, is offering these new features this week:

HOLCIM, which acquired PRB last May, has decided to strengthen its sailing presence alongside Kevin Escoffier, by taking part in the next edition of The Ocean Race (starting in January 2023 from Alicante) immediately following the Route du Rhum. The Saint-Malo skipper’s Imoca was relaunched on Monday in Lorient in her new colours.

THE ULTIM 32/23 CLASS has announced that it will not appeal the decision of the Paris Court of Justice of July 21, which obliges it to grant a temporary exemption to François Gabart so that he can participate in the next Route du Rhum Destination Guadeloupe in aboard his Ultim SVR Lazartigue.

ACE (AC37 Events Limited), organizer of the America’s Cup, presented the layout of the bases in the port of Barcelona for the 37th edition. The defender, Emirates Team New Zealand, and the challenger of record, Ineos Britannia, have already chosen the location of their respective bases.

BARCELONA will host the final of the Youth Foiling Gold Cup 2022 (disputed in 69F), from November 3 to 6.

ALINGHI RED BULL RACING launched its Boat Zero in Barcelona, the former Te Aihe of Emirates Team New Zealand (first of two AC75 Kiwis in the last campaign), with which the Swiss team will train during the authorized period (20 days until the end of September). For this, she will receive the support of New Zealander Dean Barker (ex American Magic) and Italian Pietro Sibello (ex Luna Rossa).

CONGRESSIONAL CUP: the 2023 edition of this major match-racing event will take place from April 18 to 22 in Long Beach.

BOATFOLK, a company that owns 11 marinas in Great Britain, has entered into a partnership with James Harayda and the Gentoo Sailing Team, whose objective is to participate in the Vendée Globe 2024. The team will set up in one of the marinas from Boatfolk, Gosport.

SAMBOAT is committed as a partner of Team Malizia for the Route du Rhum-Destination Guadeloupe 2022. The cruise boat rental platform will provide Boris Herrmann’s team with a catamaran which will serve as their base in Guadeloupe.

KPMG AUSTRALIA will be the title partner of the next Australian SailGP Grand Prix which will take place on February 18 and 19, 2023 in Sydney.

ULYSSE NARDIN has become official timekeeper of 11th Hour Racing Team for the next edition of The Ocean Race.

MAÎTRE COQ V, Yannick Bestaven’s new Imoca built at CDK Technologies in 11th Hour Racing’s moulds, left the yard in Port-la-Forêt on Monday. On Wednesday, it was the turn of BIOTHERM, Paul Meilhat’s 60-foot boat built at Persico in Italy in LinkedOut moulds, to be launched in Lorient.

THE ARKEA ULTIM CHALLENGE, the first solo race around the world in an Ultim (departing from Brest at the end of 2023), has launched its website and unveiled its logo.

ELIDA, a 48-foot racing cruiser monohull built in wood and designed by Thomas Tison Yacht Design & Engineering, was launched at the end of July near Hamburg.