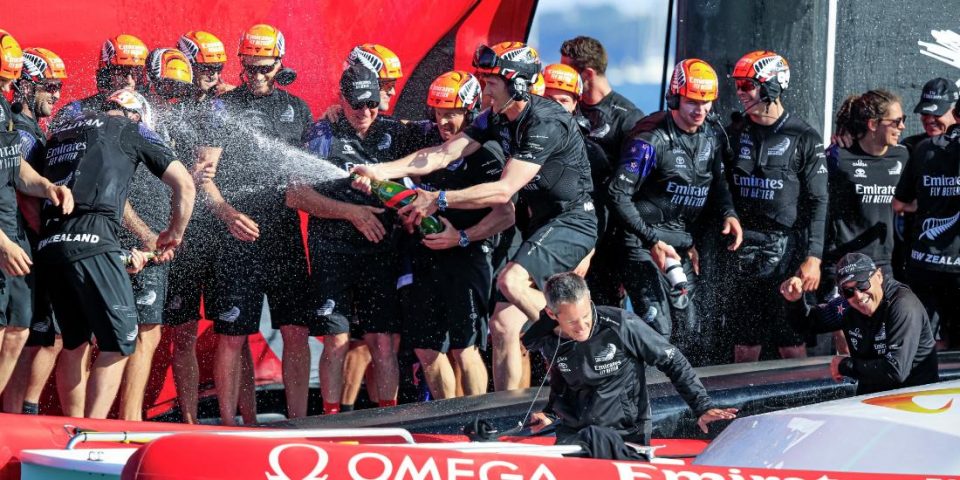 EMIRATES TEAM NEW ZEALAND has revealed the composition of its core sailing team for the 37th America’s Cup, of which Peter Burling will remain in charge, accompanied by Blair Tuke, Andy Maloney, Nathan Outteridge, Glenn Ashby and Josh Junior.

STUART BITHELL, British double Olympic medalist (gold in 49er in Rio, silver in 470 in Tokyo) and New Zealander JASON SAUNDERS have been recruited to support skipper Sébastien Schneiter in the Swiss SailGP team, which will make its debut in Season 3. The rest of the crew is being recruited.

SÉBASTIEN DUCLOS (former deputy director of the Banque Populaire team) has just been appointed executive director of Spindrift racing, replacing Jean-Sébastien Chénier-Proteau, who left to join SailGP Canada. The team also unveiled its program for the season working between the TF35 and record attempts, including the Jules Verne Trophy.

11TH HOUR RACING TEAM  is looking for a preparateur to join the team in Concarneau. Must be comfortable speaking in French and English, have an active drivers license, and be capable of driving a rib. Start date as soon as possible and compensation to be in line with experience.

THE PAPREC ARKÉA TEAM is looking for a versatile preparateur for its Class40 from May 2022; the position can then be made permanent on the Imoca of Yoann Richomme, based in Lorient.

OCEAN DATA SYSTEM is looking for an embedded systems developer engineer to support its development; permanent position to be filled immediately, based in Lorient.

INANIX, a company specializing in the design of drones, is looking for an experienced Java and/or robotics developer in the context of the development of a drone for water sports and offshore racing; permanent position to be filled as soon as possible, based in Rennes.

CHALLENGE OCÉAN, new owner of the Volvo 60 Libertalia (formerly Jolokia, the association still being supported by the owner), is selling places on board the boat for a transatlantic race between Pointe-à-Pitre and Lorient, the departure of which is scheduled for 14 March.

THE SAILORZ FILM FESTIVAL, organized by Tip & Shaft and dedicated to competitive sailing, offers enthusiasts 4 new films in 11 cities in France between March 3 and April 1. To find out about all the venues and reserve your seats, it’s here! And if you haven’t seen the trailer, it’s here!

NICOLAS ROUGER, who raced in the Mini class at the end of the 2000s has announced his intention to compete on the next Vendée Globe with a project called Demain c’est loin. He intends to finance this by selling every square meter of the sail of his Imoca, decorated by the artist Hervé Di Rosa. He has set his sights on Time for Oceans, the sale of which “is imminent”, according to its owner Stéphane Le Diraison, interviewed by Tip & Shaft.

LEYTON and THE MAGENTA PROJECT have announced the renewal of their partnership for 2022, which allows sailors to discover the multihull aboard Sam Goodchild’s Ocean Fifty. Registration to participate in the six sessions scheduled between April and December is open until March 11.

THE GRAND PRIX DU CROUESTY, which will take place this year from June 3 to 6, will welcome the new class of IRC Vintage this year, a division reserved for boats whose model has been rated IOR (before 1994).

EMIRATES TEAM NEW ZEALAND has announced its intention to tackle the wind powered land speed world record, held since 2009 by Richard Jenkins on Greenbird (202.9 km/h). A prototype, designed by a pool of architects including the French Guillaume Verdier, Romaric Neyhousser and Benjamin Muyl, is under construction, the attempt is planned for July/August on an Australian salt lake with Glenn Ashby at the controls.

THE CIC NORMANDY CHANNEL RACE will beat its participation record for the 2022 edition (departure on May 15 from Caen) since 32 boats are registered one month before the closing date for registration (compared to 27 in 2016 and 2018).

B&G announced the renewal of its partnership with Boris Hermann until the next Vendée Globe.

SAILGP will organize the Inspire Waszp Grand Final during the season 2 final in San Francisco (March 26-27), which will notably bring together the winners of the races contested in Waszp (under 21).

ARKÉA PAPREC, Imoca designed by Juan Kouyoumdijan and launched in 2019 for Sébastien Simon, is for sale.