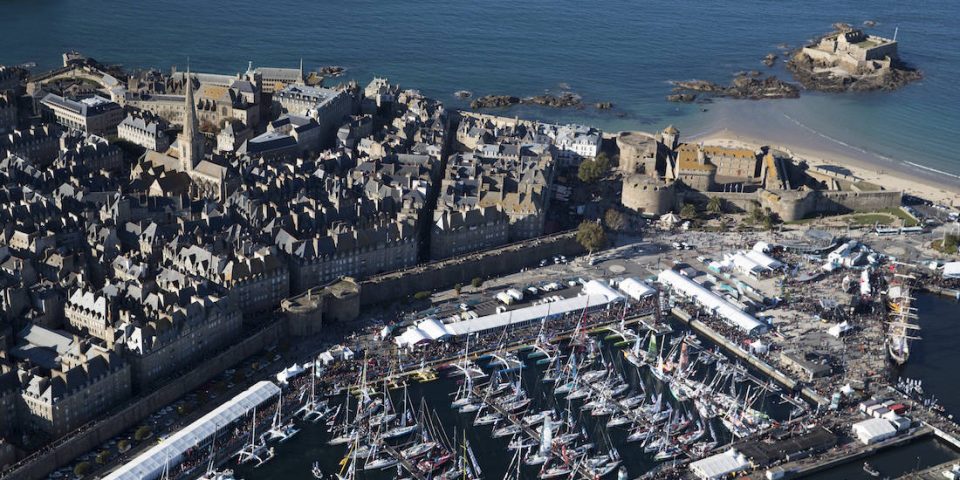 Route du Rhum: the full organisation is in place

The record field of 138 skippers who will take on the 12th edition of the Route du Rhum-Destination Guadeloupe were presented at the official press conference which took place on Wednesday in Paris. And so it proved a good opportunity for Tip & Shaft to take look at the organisation of what after all is the biggest solo ocean race in the world.

Four years after the 11th edition, which mustered 123 skippers, there will be 138 solo racers setting off on Sunday November 6 from Saint-Malo. That is, of course, provided they all complete their qualification courses  (as in a 1,200 mile solo course or a 500 miles solo race complemented by a passage to accumulate 1,400 miles). Everything seems to be on the right track according to the new race director, Francis Le Goff: “Today, we are at 80% qualified, the deadline is October 6, there will be no exemptions. We might postpone qualification of replacement skippers by two weeks [for teams wishing to register one, editor’s note].”

Le Goff is confident we will see all 138 registered entrants start on the day. “We are closely following those who have had problems. We have good news, in particular from Etienne Hochédé, who brought his boat back from England to Fécamp and qualified, and from Loïc Escoffier who capsized on the Drheam-Cup. He is just waiting for his sails to be able to sail again. It’s a little harder for Laurent Camprubi who lost his keel during his qualifying passage. We hope he can get all the bits needed to get his boat back in shape .”

If skippers don’t manage to be up to date with all their formalities by October 6, they will open the doors to those on a waiting list which is now reduced to just three skippers. “In Class40 there is only Anatole Facon, in Imoca, there were two, but Denis Van Weynbergh recently pulled out, Szabi Weroes remains, and in the Rhum Multi, there is young Thomas Lurton”, confirms Goff.

The 55 Class 40s, 16 Rhum Multi and 14 Rhum Mono have to be in Saint-Malo on Monday 24 October, followed the next day by the 8 Ocean Fifty and 8 Ultims, then the 37 Imoca on Wednesday 26. The arrival to Saint Malo of these three last classes will each form a parade, something new for this twelfth edition. The boats will go up the channel of Saint-Malo grouped and under sails before a pre-ordained passage through the locksaround which spectator galleries will be built. The other classes, already on site, will have their own similar parades on October 27 and 28.

“We want the period in Saint-Malo to have more things going on all the time.” explains Joseph Bizard, general manager of OC Sport Pen Duick, which organizes the Route du Rhum. “Four years ago during the 12 days that the village was open we really saw big peaks over the last weekend and it seemed wrong to have such a solid structure which only saw a moderate crowd over the first week. We want to have strong, appealing activities from the opening (October 25) and we think these parades will be good for the visitors who can’t be at the start to be able to see the boats under sail as they arrive Saint-Malo.”

All the boats will also enter the two docks, Vauban and Duguay-Trouin including the Ultims, which were anchored off in 2018. Bizard adds, “It was the wish of the team owners, the organizers and the authorities. We started working on this more than a year ago, with a first trial mock up with a fishing boat, then a full-scale test in July to get through the locks with Actual.“ These locks are 25 meters wide, only 2 metres wider than more than most Ultime trimarans.

The Ultims, Class40s and Rhum Multis will be moored in the Vauban basin and the Ocean Fifty, Imoca and Rhum Mono in the Duguay-Trouin, where a few old boats will also be at the eastern end of the village. And this bigger, better village is open one day more and has grown 15% in surface area compared to 2018, now up to 70,000 m2 in total. “We stay with the principle of a closed village, because we have to, but we have more entry and exit points,” explains Anthony Guézennec, the Rhum project manager for OC Sport Pen Duick. “We have made sure to optimise the traffic flow with signage and an app available at the end of September.”

The Ultims will leave the Vauban basin on Friday 4, followed on Saturday by the Rhum classes, the Ocean Fiftys and the Imocas, with only the Class40s remaining until Sunday morning. The starting line off the tip of Grouin will be much the same as that of 2018 – 3 miles -, with the opening 19-mile course to Cape Fréhel and a big, wide exclusion zone policed by 50 RIBs organised by race direction, assisted by those of maritime affairs and the teams to ensure compliance. Leisure boats will be asked to stay to the south of this area, passenger vessels (5,700 guests embarked in 2018) to the north. There is no change in Guadeloupe to the finish set up, with the course still going around the island, the Basse-Terre buoy and the finish close to the islet of Gosier. The port reception capacities are increased in Pointe-à-Pitre especially at the Darse.

In all, 150 people (including service providers) will work directly for the organization and another 400 volunteers under the responsibility of the local club, the SNSBM. Has the budget also grown? “It has increased significantly,” responds Joseph Bizard, who does not wish to give a figure (around 8 million euros in 2018). “The budget structure is organized according to sources of income which have not changed, in the in the sense that we have neither ticketing nor TV rights. The race is largely financed by sponsorship and the investment of public authorities – 80% of the budget, he specifies –, so even if we have more partners and official suppliers, these revenues cannot increase drastically, unless other sources are found.”

OC Sport Pen Duick tried to collaborate with a big production company to make a series on the race for a video on demand platforms but without success. “What did we see there? No doubt the fact that we remain a very Franco-French project for these platforms,” notes the general manager of OC Sport Pen Duick. “The audience base of our sport remains limited compared to other, more international ones. Four years ago, the Route du Rhum generated 117 million euros in benefits, but only 15% internationally, it was probably too little to convince that today. We will continue to work so that the success of the 2022 edition appeals more to these platforms.”