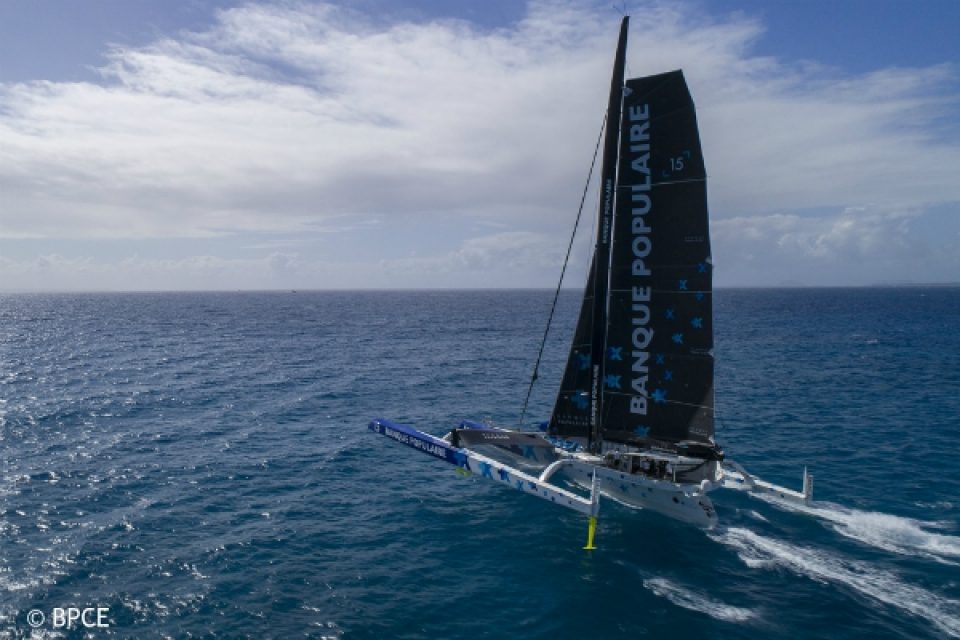 Who will win The Route du Rhum, Ultime and Imoca

As has become our norm before major ocean races Tip & Shaft have gathered a panel of experts to chose who they consider to be the podium favourites for the upcoming Route du Rhum-Destination Guadeloupe. For this Part 1 our experts cast their eyes over the ULTIME and IMOCA classes. We invited Michel Desjoyeaux, race winner in 2002 in the ORMA multihull class, Jean-Pierre Dick, third in 2006 and fourth in 2010 in the IMOCA class, Yves Le Blévec fourth in 2014 in the Multi 50, Irish expert Marcus Hutchinson who has collaborated with several IMOCA skippers over the years, Xavier Gilbaud the designer from VPLP and leading French journalists Anouk Corge (L’Equipe) and Jacques Guyader (Ouest-France) to spill the beans.

Though there are six Ultimes at the start in reality only five would be expected to be challenging for the three podium places. Romain Pilliard (Remade-Use It Again) has a project which is very different in terms of level, racing the former Castorama of Ellen MacArthur. Among the five in question, our specialists agree that, given the potential of the boats, Thomas Coville (Sodebo) and Francis Joyon (Idec Sport) would normally have trouble keeping up with the three most recently launched boats, that is Macif (launched August 2015, with a six month refit this year), Edmond de Rothschild (July 2017) and Banque Populaire IX (October 2017).

“Both know their boats perfectly, but they have a real speed deficit compared with the newest boats, that at least is what I’ve seen with Sodebo in training. It was quite obvious”, says Jacques Guyader, an assertion which architect Xavier Guilbaud agrees on: “A big step was taken this summer: Sodebo was still in the match last year, now, as soon as the conditions are conducive to foiling, to flying, there are immediate differences in speed of 4-5 knots, so unless there are numerous breakages or really horrendous conditions which would not let the foilers exploit their potential, these two boats are likely to be a little off the pace.”

Under normal conditions Yves Le Blévec believes that “the record will probably fall, with boats potentially much faster than the boat which holds the record [now Idec Sport, former Banque Populaire VII, in 7 days 15 hours 8 minutes and 32 seconds, Editor’s note] “. François Gabart, Sébastien Josse and Armel Le Cléac’h therefore are considered to be in a class apart, perhaps Le Cléac’h a little less so as he has been playing catch up since his capsize last April which really compromised his preparation. “These are complicated boats so many settings and trim combinations to test and evolve,  but also a lot of data to acquire and you really only learn that and acquire that data on the water,” says Xavier Guilbaud, of VPLP which designed Banque Popular IX and Macif. Journalist Guyader adds: “Armel has that deficit in his learning his boat, in mastering it and we feel is still on the learning curve but with him, you never know what he can produce, he can do anything”.

And so that leaves us François Gabart and Sébastien Josse, a duo which the cognoscenti have a hard time splitting up to the point that when their respective strengths and weaknesses are aggregated they come out equal! Their respective strengths? In Josse’s corner an undeniable strength is the boat, Edmond de Rothschild which by all accounts has impressed all observers during the group training sessions in Port-la-Forêt: “The advantage that Gitana has is especially in her pace with stability close reaching and reaching”, notes Yves Le Blévec, Xavier Guilbaud also confirming: “Gitana has made a lot of progress, it is a bit worrying as it is the most powerful boat, with the most righting moment. From 18-20 knots (of windspeed)  it is a bit more comfortable than the others and Seb now has accumulated good experience of flying “.

What does Michel Desjoyeaux think?: “A few months ago, I would have put Macif on top, today I would err towards Edmond de Rothschild”. Still, Macif is lighter and therefore more comfortable in the transition phases which is of course complemented by the skills and experience of skipper Gabart who has a 42 days round the world passage under his belt. “In itself that is a tremendous advantage,” says Xavier Guilbaud, “François has the most experience of high speed sailing for days upon days, he has held incredible averages and goes to sleep when the boat is doing 40kts under autopilot. Unlike the others, he has that level of confidence and knowledge”. For Yves Le Blévec who that is the winning difference: “If I had to bet the farm it would be on François, he has the most assets going for him”.

And so the podium according to our experts: 1. Sébastien Josse and François Gabart, 3. Armel Le Cléac’h.

It’s no surprise that our experts are divided on who could win the record sized IMOCA fleet. Charal, the only new generation Vendée 2020 boat yet launched is the most contentious issue. Some think it is too new and unproven to win. Others consider the potential speed and power advantage to be so great that if skipper Jérémie Beyou holds it together and finishes in good shape he will win. Jacques Guyader is very much in the latter camp.
“The difference of speed and power seems to me so huge that if Jérémie Beyou manages to hold out  even if it is only at 80% and it does not break, I only see Alex Thomson to stopping him from winning, the boat is a rocket”.
Michel Desjoyeaux agrees “if he gets the finish in largely favorable conditions, it will be impressive. And remember Jérémie has done a lot of multihull racing which is a big help to in managing so much power.”

But Charal needs to finish and be able to be sailed at something near her potential to beat the likes of Riou and Thomson, that is not a given according to Jean-Pierre Dick who recalls,
“When we launched Saint-Michel Virbac in back in September 2015, I really did not have a handle on the boat how to really make it work and so I started gently”. That November, as with other new boats, he had to abandon on the Transat Jacques-Vabre.
That is what Jérémie Beyou and his team want to avoid at all costs in this race. “It’s good for him and especially for his sponsor to be in the Rhum, but at two years before the Vendée, you’re not going to risk everything.” says L’Equipe’s Anouk Corge. Adds Xavier Guilbaud: “Jérémie wants to benefit from having launched his boat earlier than the competition so he can plan and execute the changes this winter, so he needs to complete this round trip, that is his first, top priority. A podium finish would be like a victory for him”.

And so on balance our experts put him in second place on the podium behind the redoubtable Yann Eliès and ahead of Alex Thomson and Vincent Riou who, they have balanced together on the third step.
“Yann is a safe bet he knows the game and how to win it” says Marcus Hutchinson, while Jean-Pierre Dick, who collaborates with Eliès on the project, believes that the experience of the Transat Jacques Vabre win last year gives him an edge.
“The boat is reliable, comfortable in windy conditions, Yann knows he can push on hard“. As for Anouk Corge, she highlights Eliès psychological resilience: “Yann is hungry, he must find his budget for his Vendée Globe. He knows how pivotal this may be and so he is never as strong as when he is in this situation”.

All agree, however, that both Hugo Boss and PRB – which has been fitted with foils for this season  – have a higher potential than Ucar-St Michel which could not be developed further (it will be sold to Giancarlo Pedote at the end of the year).
“PRB has quite impressive appendages that make it a very powerful boat close reaching and reaching ,” says Jean-Pierre Dick. Marcus Hutchinson, however, is not so convinced:
“Vincent has not sailed with his foils in strong winds. He has had a lot of technical problems in the past. How will he work with the different loads of the foils? ”
These loads and the operation of the foils were of course well tested by Thomson on Hugo Boss, second in the last Vendée Globe, and in training since, not least on a crewed 24 hour record across the Atlantic in the summer, VPLP’s Xavier Guilbaud sees the Briton as a very serious candidate for the win: “This is the most successful boat of the last generation, Alex really wants to finally win a big offshore race and most of all, he does not have much pressure, because he has a new boat on the way. “

If these four sailors rather dominate the thinking of our panel, some don’t rule out the ‘outsiders’  in particular Sam Davies and Paul Meilhat.
Jean-Pierre Dick considers Sam Davies “the revelation of the year“, because she has sailed a lot since March and Initiatives Coeur has progressed a lot since the winter, including the installation of rake control on the foils, allowed after last Vendée Globe. This allows to angle of incidence of the foils to be adjusted according to the conditions and so make them more polyvalent (all-rounder) across the wind range.
And the weather could conspire to benefit Meilhat and SMA, which has no foils: “If there is a lot of wind and sea, hard on the wind, say, for two days and then maybe VMG running after, well Paul could do well, but he really needs a weather pattern that matches his boat’s configuration.”  Marcus Hutchinson concludes.