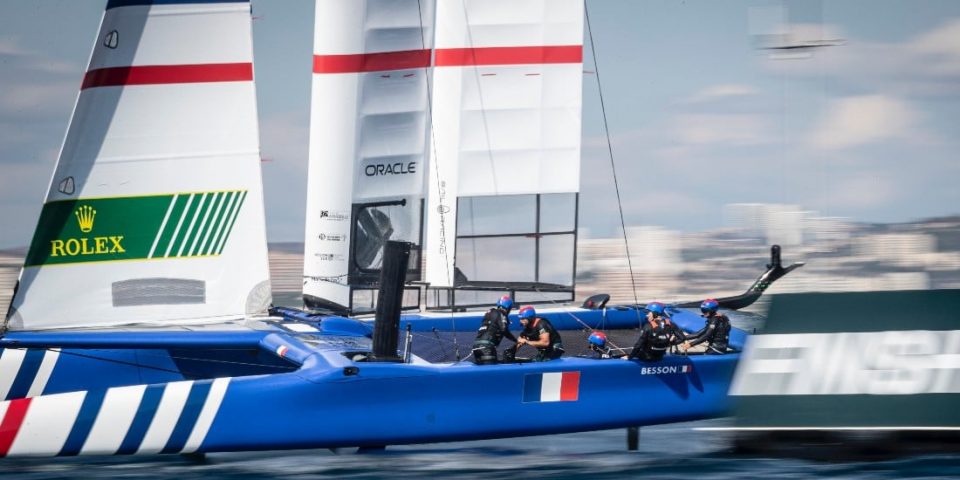 Billy Besson: “In SailGP, the level is higher than on the Cup”

It has been something of a busy week for Billy Besson. On Saturday, the four-time Nacra 17 world champion (with Marie Riou) was elected to the board of directors of the French Sailing Federation, where he became vice-president in charge of high performance sailing. Then on Tuesday he flew to Bermuda to prepare for the SailGP season with the French team. Confined to his room while awaiting the result of his Covid test, he took the opportunity to answer questions from Tip & Shaft.

Let’s start with the news from last weekend and the election of the president of the French Sailing Federation, why did you decide to engage with Jean-Luc Dénéchau, the newly elected President?
First of all he was the only one to have called me on the subject of the high level performance and secondly because there is a desire on my part to get involved in the Federation. I have devoted 22 years of my career to being a top athlete in Olympic sailing, the federation has given me a lot over the years, so I too wanted to give back, to give it some help.

But you had a good relationship with Nicolas Hénard, the previous president, why didn’t you campaign alongside him?
It is true that we were close before his election but since then I never heard from him. Then my choice can be explained more by the fact that with Jean-Luc we share many of the same human values, we meet on a lot of points. And it’s not like it has all happened between us in the last few days we’ve been working together on this project for seven months.

So here you are vice-president of the FFVoile in charge of high performance, what does that mean?
The title is not important to me. The most important thing is to work for the future of sailing. As a top athlete I’m really happy to have landed the Nacra 17 world titles with Marie, but it is much more about how we got there that mattered. So that’s what I want to focus on with the will that we can all work together, from the grassroots updards that is to say the clubs all the way to the elite level. As a top athlete, I’m judged on my results, that’s normal; and when you look at the results of the federation, and in particular the benchmark that is the number of competition licensees, it is very hard to see this happening: we went from 285,000 licenses in 2016, when Nicolas took over the presidency, to 230,000 three years later, and I’m not counting the period into Covid. I’m not judging, but we what we have to do is reverse that trend, to try to breathe life into things. If the mass participation is impacted, the top, elite level is also.

Is your competition schedule compatible with this function at the Federation?
Yes of course. I am giving the FFV time, but I’m going to organize myself accordingly.

Now let’s talk about your second thing, SailGP: can you tell us about the upcoming programme before the season kicks off on April 24-25 in Bermuda?
With about four weeks ahead of us, we’ve never had so much time to train on the boats. We are going to take this opportunity to gain as much experience as possible, because I remind you that before our first Grand Prix two years ago in Sydney, we only had one day of training which never really helped us. So here I am relying on this period to work hard, especially since we are in a constant sanitary bubble, we can not do anything else there is a ban on going cycling or running, to go for a coffee, to make contact with the Bermudans, it’s super strict. So, we will spend our time between the hotel, the technical base to prepare the boat and sailing.

Were you able to sail a bit in 2020 before it all stopped?
We just did the season opener in Sydney, then lockdown came. Fortunately, we were able to sail at home through the summer on the Easy to Fly, Jean-Pierre Dick’s boats. Even though it’s smaller than an F50, it allowed us to make starts, knowing they are exactly the same as SailGP’s. We did 44 in all, it was very nice to keep in the game sailing on flying catamarans, we will continue the ETF26 circuit this season.

So this is the first time that you have stepped onto the F50 in over a year, how have you prepared yourself?
We spent a fortnight with the guys trying to remember how the boat worked: we reviewed and debriefed races we had done and analyzed our way of working, our manoeuvres, it is important to question ourselves all the time in order to progress. And we did mental imagery work to help the brain get back into shape: each on their own at their station locks themselves in a room, closes their eyes and races, we know what to do and say, which button to press, where it is placed, where we put our feet. On these boats, the races last barely 13 minutes, things go very, very quickly, so the more systematic, practiced our ways of doing things, the more efficient we are. It is important to do this work, especially to be a bit more composed and calm on the first few outings.

“We are going to be more ranked among the outsiders”

Has the team changed since last year?
The new thing is having Hélène (Noesmoen) on the boat, all part of SailGP’s desire to open up the circuit to women to promote them in the high-level environment, and I think the goal in the long term, it is also to have a 100% female crew. She knows foiling at least on a small machine, since she is the iQFoil world champion [the future Olympic board, Editor’s note], on the other hand she is not yet familiar with the big boats but she will learn.

How do you see the form this season the level presumably rising with the arrival of a New Zealand team led by Peter Burling and Blair Tuke?
The teams are so strong now. It’s exciting as the level is so high I can’t wait to get on to the start line next to these guys and see the “first turn” at the reaching buoy. We are going to face very seasoned sailors in this class so we are going to be more ranked among the outsiders now. But at this time, pre-season it’s hard to predict and tell you what our goals are going to be, I think we will know more after these four weeks of training.

Peter Burling, James Spithill who leads the American team, Ben Ainslie the English team, Tom Slingsby with Australia, Nathan Outteridge with Japan and so on, this F50 circuit really has an America’s Cup flavour, no ?
Yes, completely! I would even say now the level is higher than in the America’s Cup, it’s really the elite event of world sailing, it’s great to be in such competition. And the format is different: the Cup is match racing, SailGP is fleet racing where everyone can do well at any time.

And so what did you think of the America’s Cup?
It’s always a great event with some pretty crazy boats. Three years ago, everyone was laughing when we talked about flying a foiling monohull of this size and when it was launched that’s what happened, but it was technologically exciting. On the other hand, I find that the technology is taking over so much that the regatta is sometimes less attractive to watch. I don’t want to compare with SailGP, where there is also a lot of technology, but with eight boats racing the spectacle is more intense.