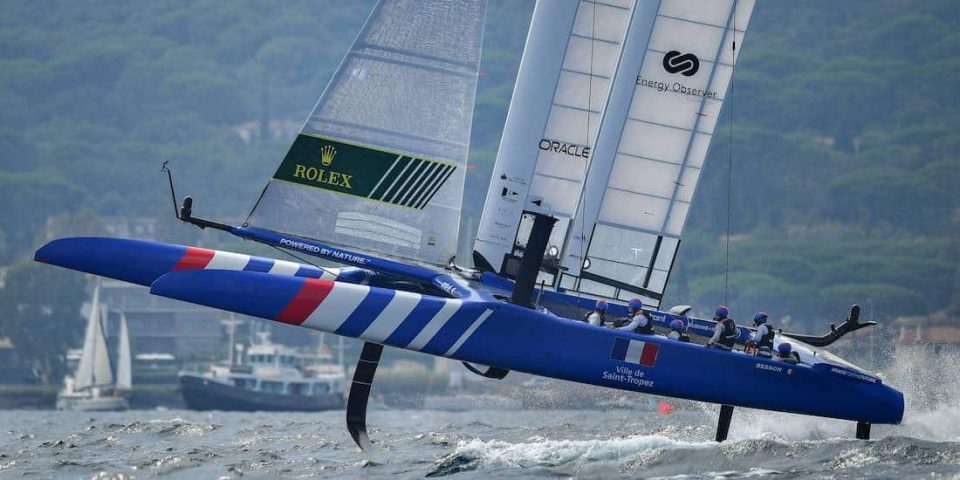 Bruno Dubois: “We need to be able to show an other face”

On Monday the French SailGP team announced that they have replaced skipper Billy Besson with 2020 Nacra 17 Olympian Quentin Delapierre. The decision was taken after the Saint-Tropez Grand Prix in which the French finished last. Team manager Bruno Dubois explains the change Tip & Shaft.

When and why did you make this decision?
It is a decision which was taken after Saint-Tropez. Billy has always said he wanted to be judged on his results. We finished almost last in 2019 (5th out of 6), in 2020, we only did one event (in Sydney), we finished last, and here at the French event we are last. Even though we had progressed and got two podiums, we still had bad results in Aarhus, in Taranto and then in Saint-Tropez, we cannot accept having a French team like that. Billy is a very good racer, I am not questioning that at all, but when you are not getting the results you want in sport, it’s often the captain that you have to change. I know it’s tough, but people were warned at the start of the season that on SailGP we can make quick, unilateral decisions, everyone knows that.

We are less used to experiencing that in sailing…..
(He cuts) I hear people talk about sport-business, but in the Vendée Globe, the Route du Rhum, this is also about sport-business! This is sailing with and for sponsors and when things don’t go well, we make changes. We have already seen changes in major teams in France, this is not an Anglo-Saxon way, everyone is aware of the rules of the game.

Why did you make this decision at this time and not at the end of the season?
Because now is the time to invest for the future. This season has not got off to a good start, as we were aiming to finish in the top 3 and now we have to really prepare for next season. If we only brought in Quentin (Delapierre) at the first event of Season, 3, he would have been a stage behind, so we needed to bring him in early. I explained the situation to Russell (Coutts, boss of the SailGP circuit) who told me that if you have to change, you should to do it now, not later.

“Quentin is a young guy
who has a good mentality”

Why Quentin Delapierre?
Well I didn’t wake up one morning and think he was the guy to call, he’s someone I’ve been following for a year and a half. I’m used to consulting with people around me to see what’s happening, so I’ve spoken with people who have worked with him or have advised him over the past few months. There are a few of us who have watched how he managed his Olympic campaign after arriving very late in Nacra 17 and how he managed to get into and do well on big boats (with Sodebo), how he communicates. He is a young guy who is in charge and operates well. He also has very good contacts with very good sponsors.

He will find himself in at the deep end, the next Grand Prix is next weekend in Cadiz, it is quick to find himself on the helm of an F50?
With François Morvan and Leigh McMillan (flight and wing trimmers), they have already taken the working doing the simulator a week and a half ago in England. And as the Spanish planned to sail next week, with the Swiss as well (for them working towards the 2022 season), we were lucky to have the go ahead to sail all week, we will have support for that with Thierry Douillard and also Jimmy Spithill (skipper of the American boat) who, as he had planned to train a youngster, suggested that Quentin comes on the boat with him on Wednesday.

What is the goal for the second half of the season?
We have three events left, the goal is to help Quentin take control of the boat as best he can. On our side is we have is that we have a team that is going well, it will be easier for him to get on quickly on this team than if he had to build it from scratch, like Billy had to do it at the very beginning. Now a strong unit must be created, the objective will be to show some good things in San Francisco (last event of season 2 in March 2022).

Coming back to Saint-Tropez, in addition to the sporting issue, was there an important image issue for you, knowing that you are looking for partners? How was this weekend for you?
The work with our prospects was very good, but the result was not what we would have liked. For sure when you are with potential sponsors that you are looking to convince them to join you, finishing last does not help, especially losing by going out of the boundaries or by taking penalties. These things put the French team in a difficult position.

Let’s talk about funding, where is the team today in its search for partners, knowing that SailGP wants teams to self-finance?
We have had a lot of meetings, but for the moment, no sponsor has committed to join us. And today, right now there are countries knocking very hard on the door to come on board and take over existing boats; that’s our responsibility. If we want to be on the water in Season 3 we have to perform on the water and also commercially, we need a product that will interest the sponsors. Unfortunately, it is clear that what we have been offering over these three years is not of interest to the sponsors.

Why ?
Usually the sponsors don’t explain why they don’t want to sign, it’s up to us to guess. I think we need to be able to show another face, maybe that of youth.

“For the moment, we are failing”

Did you expect this job to be so difficult?
I knew very well what I was getting myself into and that it was going to be complicated. It was already been with Franck Cammas on the America’s Cup in Bermuda, we are in a similar situation looking at identical network, with the same style of boat and an international circuit, so I am not surprised. I have been hired to get results and if I don’t get them, this will be a failure. And for the moment, we are failing.

Is there a dead-line to get funding?
Larry Ellison has always been clear, saying he will help the circuit for five years, but today there are teams starting to bring in funding, either through sponsorship or through franchise buyouts. That is  also our objective. We know new teams are also coming [new entrants must be financed, Editor’s note]: after the Swiss announcement recently there will be more in a few days. I know we have the support of Larry Ellison to keep going but we shouldn’t be sitting still meantime.

Is the France team guaranteed to sail in season 3?
No. And it is not only France that are concerned, all the teams that are not funded today are in the same situation.

Billy Besson: “A big surprise”
Asked by Tip & Shaft, Billy Besson spoke of being dropped: “Bruno called me after the weekend in Saint-Tropez to tell me that I was fired. I asked him the reasons and I didn’t have a lot of answers. I then asked Russell (Coutts) to have an meeting to clarify the situation. I told him that if I was judged like that on my sports performance, it should be the same for everyone else, that I am not the only one to suffer from it. I did not feel this was coming at all, it was a big surprise. There is always pressure on this circuit, and so before Saint-Tropez, I didn’t feel there was any more than usual, I saw no warning signs. As for sporting results, we are certainly last overall, but we also made two podiums, the only two other teams to have made two podiums this season are the Spaniards and the British. It’s a disappointment but I will live with it, I have had other hard knocks but as a boxer would say, the one who wins is the one who manages to deal with the most punches.”