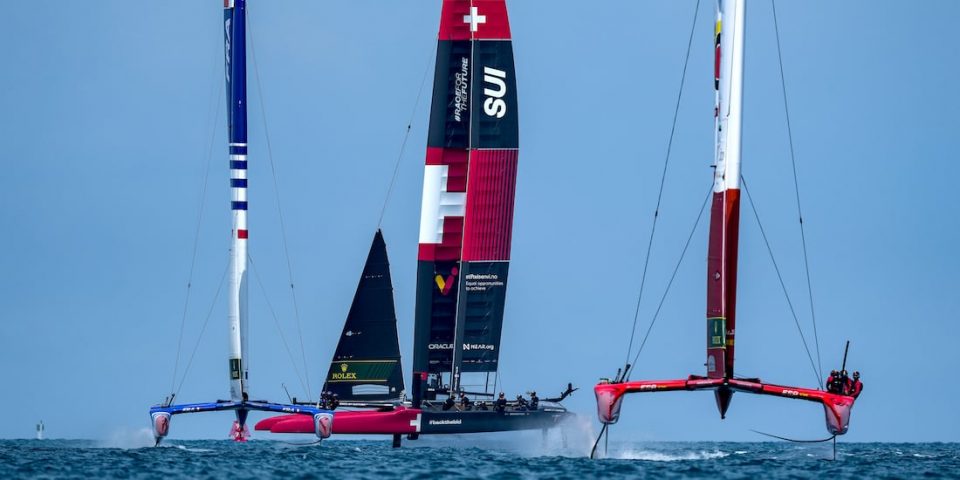 How SailGP continues to grow

Just six weeks or so after the end of Season 2 which was won, like season 1, by Tom Slingsby’s Australia, already Season 3 of SailGP looms large on the horizon. It is mustering ten teams and will be contested over eleven stages. It begins this weekend with the Bermuda Grand Prix. Tip & Shaft tells you more about this flourishing circuit.

Before Season 3 racing starts in Bermuda the circuit’s communication team lead by founding duo Larry Ellison and Russell Coutts, revealed figures which showed impressive growth from Season 1 in 2019 to 2021’s Season 2. These numbers proved that SailGP has moved into another dimension, particularly in terms of TV/digital audiences and media coverage. Julien Di Biase, chief operating officer,  comments, “Season 2 was beyond our expectations. When we started in April 2021, we didn’t even know if we could still really do events because of the Covid. In the end, we only had to cancel one event, in New Zealand. But the fact we could be one of the first international events to relaunch was essential.”

And this level of satisfaction is echoed by the team manager of the French team, Bruno Dubois, who has been on the the circuit since its debut (with China the first year): “SailGP is definitely the most professional, best organized and most interesting circuit in the world. Both sportingly, with the best skippers, and technically, with boats that will go even faster this year with new T-foils that we will soon have. It is without doubt the place to be.”

For season 3 the circuit grows bigger with ten teams and eleven events (compared to eight and nine in 2021-2022) – one stage has yet to be announced which will probably be Sydney. “When we started SailGP, we had a five-year plan at the end of which we were to have ten teams and ten events, we have already achieved that objective during season 3“, rejoices Julien Di Biase again. In an article published at the end of April in Front Office Sports, Andrew Thompson, SailGP’s chief commercial and financial officer, said they were aiming for 15 events in season 4 and more than 20 in season 5!

Three new destinations are on the program for 2022/2023: Dubai, Singapore and Christchurch, New Zealand – SailGP has signed an agreement until 2026 with the Kiwi organizers. While most of the countries with teams on the circuit have a home event, this is not the case for Switzerland and Canada, the two new teams this season, nor for Japan. “For Switzerland and Canada, we prefer they initially focus on their sporting performance, but we are working with them for events in  season 4. For Japan, we have not yet found a suitable site,” said the director of operations.

Nathan Outteridge’s Japan team which was second in both the first two seasons has for the moment neither major partners nor an event. So right now they are bearing the brunt of this double handicap as the completion of the tenth F50 has fallen behind. “It will probably be ready this summer in Europe”, says Julien Di Biase. Contractually, the newcomers are guaranteed a boat, so the Japanese boat has passed into Canadian hands. “The difficult decision – after much deliberation – was made based on logistical and commercial considerations,” explain SailGP. “They did not take into account the sporting results, but more the team which had the fewest commercial deals“, confides an internal source on the circuit to Tip & Shaft.

Switzerland and Canada
in place

Launched by funds from Larry Ellison, one of the major challenges of SailGP is that it becomes financially viable as quickly as possible. This is the case for the majority of the events, now financed by cities/communities/host countries, with private partners. The budget for an event is around 3.5 million dollars (3.36 million euros). But the teams are not yet all self funding.  Of the ten competing this year only four are self-financed: Great Britain (by Ineos, the project being an integral part of their America’s Cup challenge), Denmark (supported by Rockwool) and the two latest arrivals, Switzerland and Canada, which have bought a franchise. The (franchise) entrance ticket? 25 million dollars, according to our information.

For Switzerland, the growth of Team Tilt continues by entring SailGP. They have been present in recent years on several foiling circuits (Youth America’s Cup, GC32….). “When we saw SailGP set up, we always said to ourselves that it was the ultimate project for us, it’s Formula 1 sailing, a great challenge for us”, welcomes the skipper Sebastien Schneiter. Thanks to the newcomer rule which now allows new teams to recruit three non-nationals in their first year, Team Tilt will rely on the Brits Stuart Bithell and Richard Mason (who passed through the British team) and the New Zealander Jason Saunders, who was with the Kiwi team last year.

The Canadian team, owned by Fred Pye, an entrepreneur who made his fortune in crypto-currencies, will rely on Kiwi Phil Robertson who previously skippered the Chinese and Spanish boats, and he will be supported in particular by Briton Chris Draper on loan from the Japanese team while waiting for them to collect boat ten. “Looking at what Phil has managed to do with crews who don’t speak his language, namely getting on the podium or getting close to it, we will try to aim for the same thing, without putting too much pressure on ourselves either. The objective is more to have a team that will be competitive especially at the Canadian event during season 4“, confides Jean-Sébastien Chénier Proteau, the team manager, who has worked in the Volvo Ocean Race (Dongfeng), SailGP China Team and Spindrift racing.

France: now as part of a Cup programme?

As for the other teams – Australia, France, United States, Spain, New Zealand, Japan – they must find their own funding to support all or part of an annual operating budget which varies between 6 and 8 million dollars and no longer is or soon needs not to depend on subsidies from Larry Ellison. France are on the right track as confirmed by Bruno Dubois: “We have signed a partner who will be announced at the end of the month, both as a sponsor and investor in the team. We are  also in the process of signing a sponsor to fully support the Saint-Tropez event and we are in discussions with others for the main sponsorship of the team. We are not entirely self-financed, today we are talking about half the budget, but we are quite happy and Russell (Coutts) is too.”

Dubois can say nothing on the subject but the project should become part of a French challenge for the America’s Cup based around, among others, Stéphane Kandler, Franck Cammas and Quentin Delapierre, the skipper of the French SailGP team. Hence the recent announcement of the end of Delapierre’s Olympic preparation in Nacra 17 with Manon Audinet, shortly preceded by an identical announcement from the team’s newcomer, Kevin Peponnet – replacing the Englishman Leigh McMillan (who has returned to Ineos for the America’s Cup) to trimming the wing – who had jusy just started an Olympic programme with Aloïse Retornaz in a mixed 470.

So what is the realistic objective of the French who were ranked last at the end of season 2? “It doesn’t show too much from the outside, but after only three events with Quentin at the helm, we have reached the stage where the team was in Saint-Tropez last year [Grand Prix at the end of which Billy Besson was relieved of his role, Editor’s note],” indicates Bruno Dubois. “We are making good starts, we are fast on the reach but not so good thereafter. So we are emphasizing that with the addition to the integration of Kevin, we can keep improving. Quentin is respected by everyone, now, we must not be afraid to win. That is the next process we will put the structure around that with a  mental coach and a sports director to move on to the top level.“

Announcements will soon be made for this French team, which, if the project is confirmed, will combine SailGP and the America’s Cup – as Great Britain and New Zealand do – while training in parallel in GC32, with in particular a participation in the next World Championship in Lagos (July 13-17). This is proof that all these circuits are beginning to converge. “In comparison with football, SailGP is the Champions League, the America’s Cup is the World Cup”, summarizes Bruno Dubois. Two different competitions but with the same players.”