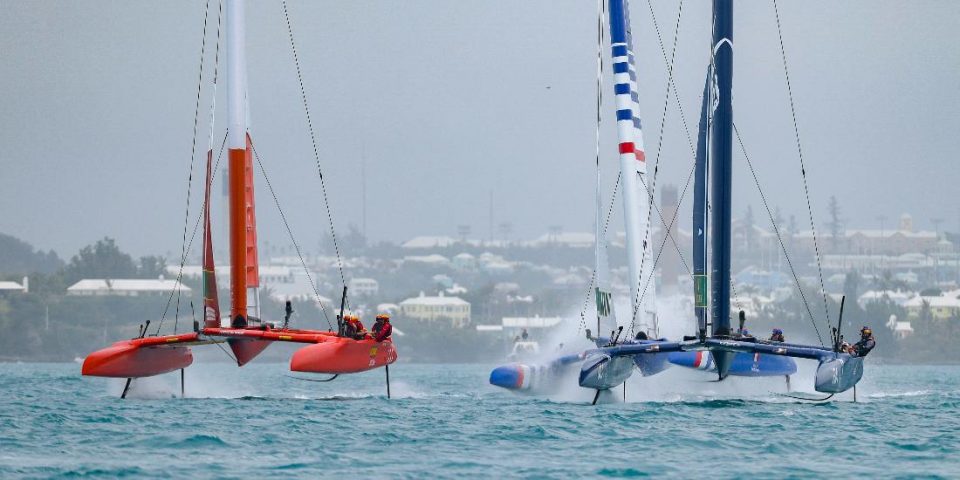 Julien Di Biase: “Our goal is to have 10 teams competing in SailGP”

SailGP season 2 begins this Friday instead of Saturday in Bermuda (the race day scheduled for Saturday has been cancelled due to the forecast for very light winds), Grand Prix racing against a backdrop of confinement with eight teams participating this time. Tip & Shaft took the opportunity to talk to Switzerland’s Julien Di Biase the chief operating officer of the F50 circuit.

After the 2020 season was finally cancelled how is season 2 of SailGP looking and especially this first confined Grand Prix?
After starting in Sydney and then quickly making the decision to cancel the season completely we immediately started working on this year, telling ourselves that, whatever the environment in which we would evolve, we would have to that we can operate all events. We gathered quite a bit of information in the countries we wanted to go to to find out what governments were doing, what the trends were in relation to Covid, how other sports were doing, which allowed us to always have a pretty good idea of the chances of being able to organize events or not, but also of working to establish a solid Covid protocol. So when, all of a sudden, things started to go wrong in Bermuda, until the lockdown that happened ten days ago, we were still able to continue operating.

Do you have any certainty about the viability of the whole season at the places and dates planned?
Yes, I am convinced of it. First because we have prepared ourselves for it, then because we have very strong partnerships with the cities, and finally because the world has evolved: several countries have put in place measures so that professional sport can continue even in a difficult environment. confinement or curfew context.

Did you have to adapt SailGP’s business model, knowing that you might not be able to sell a lot of tickets?
We will continue to sell tickets but obviously to a lesser degree. Here in Bermuda we still sold tickets for on the water. We think in Italy we will probably have non paying spectators and then from Plymouth onwards we hope that things will stabilize, I think that this aspect will gradually resume. But it is not like ticket sales really fund the whole tour that is basically the cities and the sponsorship. The big changes we made were first to cut back our costs wherever we could – and that wasn’t necessarily Covid-related. In particular we now have people who work on the events but work from home, including some among the jury and in race management. We were close to 400 people before including the teams, in season 1, and now we are around 200. At the same time, we have managed to find better partnerships with the cities and to increase the number of our sponsors.

“Cities provide 50% of the cost of the event production”

When we debriefed at the end of season 1, back at the end of 2019, you mentioned a budget of $4 million per event, what about this year?
We were at $4-4.5 million depending on the city, today it’s around 3-3.5. In terms of funding, partnerships with cities they pay cash, but also provide in-kind services and support for promotion, throughout the season, so they provide 50% of the cost of producing the events. It is a big change from Season 1 which was much more of an investment year for SailGP. For the rest private partners provide about a quarter of the budget over the entire season, which means SailGP continues to invest for the rest.

As for the teams, the annual budget was $ 5 million per team, has that also changed? And do some manage to finance themselves the way you want?
The budget is the same, it is reduced per event, but since there are 8 instead of 6, it’s the same. As for the funding process, it takes a little longer than the funding of the events and the championship, but there are positive signs with small partners coming in, discussions which are becoming very concrete with potential main sponsors. I think that being able to come back now and go racing will allow the teams to get ahead and transform some of these discussions to deals. So far, only the Danish team has a main sponsor (Rockwool). But we also have teams contacting us to join the circuit, them knowing that those who want to enter must come in with all the funding. Our goal is to reach ten teams and as many events in all of the countries involved.

Is there pressure from you to the teams to fund themselves?
Yes there is the performance pressure on the water, but, at the same time, the pressure to finance itself will increase this year. It’s a bit like cities: we are not going to go back to a town where we are not going to find funding. That logic is more complex with the teams because there is a human side and sports performance side to take into account, but the logic remains essentially the same.

“Going from six to eight boats
will be a game changer”

The field is quite impressive this season with a lot of stars, is this better than the America’s Cup as Billy Besson told us?
I wouldn’t compare the two, because it’s very different in terms of the sport. Fleet racing we have the boats on the same starting line, even if at the end, it ends up with a Final of two. The other big difference is that they are all the same. In terms of the level of the competition we are really delighted to have the best in the world and right now they all think they can win!

The first season was clearly dominated by the Australians and the Japanese, your objective was to make the fleet more homogeneous, will that be the case this year?
We will have a very high level, that’s for sure; I hope and think it will be very close as well. The teams that were having more difficulty in 2019 worked a lot last year, either individually on foil racks or in groups on bigger boats. I think going from six to eight boats will also be a game-changer; in any case it will increase the tension.

And the risk of collision? Is security an important subject for you?
Yes it is essential on the one hand to be able to maximise the safety of the sailors, on the other hand to be able to continue sailing when you have big crashes. They are extremely fast boats, so there is a lot of G-Force in the turns, the gybes, the sailors can lose their grip, but they are secured. This means that they can move around on the boat, but in principle not fall into the water, which is the main danger, with the risk of being hit by a foil. If they capsize, we think we can handle the situation, we experienced it here during training with the American F50. We have less experience of very big crashes between two boats; I hope that won’t happen.