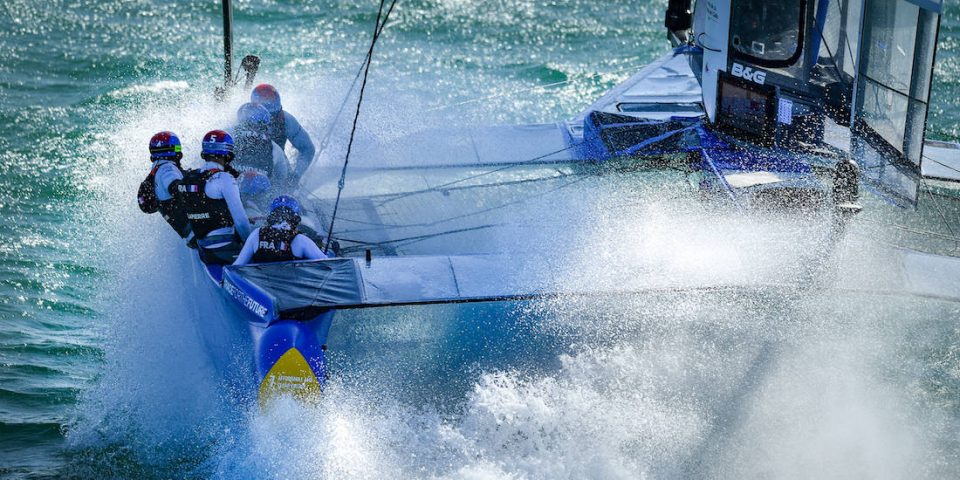 Quentin Delapierre: “I’m in SailGP to perform, otherwise there would be no reason for me to be here”

The French SailGP team flew off mid-week to San Francisco where the final of the second season will take place on 26th and 27th March. It was the perfect opportunity for Tip & Shaft to talk with skipper, Quentin Delapierre (successor to Billy Besson who was dismissed last fall) who has also started preparing for the Olympics in Nacra 17 with Manon Audinet.

In the documentary posted online last week on the French Sail GP team’s various social networks, we saw your official appointment confirmed by Bruno Dubois as the new team skipper. How do you feel about that now? Did you feel apprehensive?
In my mind, I wanted to be Quentin Delapierre, which meant creating a real team spirit, of getting everyone to work together. It is this coming together that I like most in sport. Having said that, there was bound to be a little apprehension, not necessarily linked to what was going on or replacing Billy (Besson, fired last autumn is now in Olympic preparation mode on a Nacra 17 with Noa Ancian), but more to do with the handling of the boat. There are lots of systems to work on, sequences that have to be respected, so that requires a lot of concentration.

What do you remember most from your first Grand Prix in Cadiz?
That SailGP requires a lot from you! When we went out on the second day in lots of wind in amongst the rocks, I soon understood that we had to take risks and take it to the edge occasionally. On a personal level, I was not of course happy with the result (8th and last place), but I was pleased about the way we got to grips with the boat. Bringing her back in one piece on Sunday was already an achievement.

When you enter this circuit along with stars like James Spithill, Peter Burling, Nathan Outteridge, Tom Slingsby, Ben Ainslie and others, does it feell like you’re with the big boys now?
Above all, it felt incredible to have this opportunity to do battle with some of my idols. The fact that I was out on the water and up against them and seeing that I wasn’t hypnotised by all the names around me, boosted my confidence. Now, once I beat them, I can be in their world.

When you talk of idols, are you thinking of anyone in particular?
Ben Ainslie, who has been an example to me for a long time. It reminded me of the stories my Dad told me when I was small. I watched all his medal races in the Olympics against Robert Scheidt and the others. Another who is quite an inspiration for me, because of the way he accepts the way he is, is Tom Slingsby. He is not the typical Olympic sportsman who remains in the same mood. In fact, he is quite nervous, not always fun, but he manages to get the most out of his character. I am extremely lucky to be able to compete against these blokes, whose races I used to watch from my sofa.

“The F50 is the ultimate boat”

Does competing in the SailGP really boost your career?
Not yet, as I haven’t performed well, but yes, it could do that. My goal is to enable the team to adopt a different face, to get back up the rankings and I know that is going to happen. It may be just an anecdote, but for me it is much more than that. In Sydney, we won a training race and ended up third over the day. For me that was a first step and that is what I told the team. Over the race weekend, we didn’t perform well (7th), but that day was very positive.

Do the sensations you feel on an F50 feel like something out of this world?
I believe that this is the ultimate boat, where you are never worried by the RM (righting moment). To give you an example, on the second day in Sydney, when we went from a calm to a lot of wind, the boat wasn’t worried, there are so many check points on the boat that if you get it right, she maintains her longitudinal and lateral trim and just accelerates without heeling over, which is truly amazing. It does mean that you have to know when to ease off and when to remain fully focussed. For example on a bear away (where the boat really takes off), you need to take a breath before and not during the manoeuvre, because if the windward rudder comes out of the water, you go over. When carrying out manoeuvres, there is a crazy sense of danger. The goal is not to get the boat moving quickly, but to keep her upright. When you are used to sailing on boats where you are fully in control, it is quite astonishing. Here, you take it to the edge and you know that it could end badly, but that is what make it so exciting.

What are you expecting from the finals in San Francisco?
One of the goals will be trying to improve the starts. We’ll be aiming to cross the line at our target speed without having to worry about the other boats. If that works out, I hope you’ll see an excellent performance over the week-end.

“It is SailGP by pressure!”

Season 3 will be coming up shortly. Will there be any changes in the team?
Kévin Peponnet will be joining us, he is in fact with us in San Francisco to get used to trimming the wing. He was European and World 470 champion. I won the Tour de France sailing race twice with him. I get on really well with him. We shared the same room at the Games, so it seemed to be the obvious choice to call him up. It’s true he doesn’t have experience as a wing trimmer, but given his engineering and technical background, I’m not at all worried.

Season 3 will be a baptism of fire for you and you’ll have to show us what you can do…
Yes, that is exactly it. It’s all clear in my head. I am in the SailGP to perform well, otherwise there would b no reason for me to be here. I fully understand that I’m turning up for these races to win them and get on the podium at the end of the season, then a couple seasons later win the SailGP. We may or may not succeed, but we have the ambition and it is our dream. My job is to ensure that the team pulls together to fulfil this dream.

The aim of getting on the podium was identical in Season 2. Billy Besson ended up paying for the poor results. Can you feel the pressure on you too now?
Yes, the pressure is there, but that is only natural in the SailGP, it’s the SailGP by pressure! I have known that from the start, so my only goal is to be 120% focussed on our performance. To achieve that, I am working on a lot of key factors setting myself targets in terms of the means. I’m not getting up in the morning telling myself I am going to win the race. That doesn’t work. The goal is to understand what is going on and focus on how to achieve te goal.

“The America’s Cup is my other dream”

Let’s talk about your Olympic project with Manon Audinet. What’s happening?
We got back training in January in La Grande Motte with the new French trainer, Benjamin Bonnaud, Tim Mourniac and Lou Berthomieu. Unfortunately, Manon hurt her back a bit and we stopped to make sure it was OK. So, we didn’t go and train in Palma, but we will be there in early April for the first event of the season leading up to the World Championship in late August in Canada. That is the main goal chosen by Philippe Mourniac, the head of the French team. That is the big one we are focusing on.

There is a lot of competition within the French team. How do you feel about that?
It’s true that there are people with a lot of experience as well as some talented youngsters, who sail very well. Billy (Besson) is back. He is a serious contender internationally. To be completely honest, if I continue in the Nacra 17, it is to win races and get an Olympic medal in Marseille. With that in mind, I’m not interested in focusing on the competition within the French team. You have to understand that there are some very effective foreign groups, particularly looking at the Brits, the italians and Argentineans, and the results speak for themselves, as this group took two out of three of the medals in Tokyo [gold for the Brits, silver for the Italians, editor’s note]. The goal is to build a competitive team capable of doing as well as them. That’s what motivates me, more than the French rivalry, which is very healthy.

Is the Cup your ultimate dream?
I have two: The Cup and an Olympic medal. That is ambitious, but you have to aim high, as otherwise you wouldn’t work hard enough.