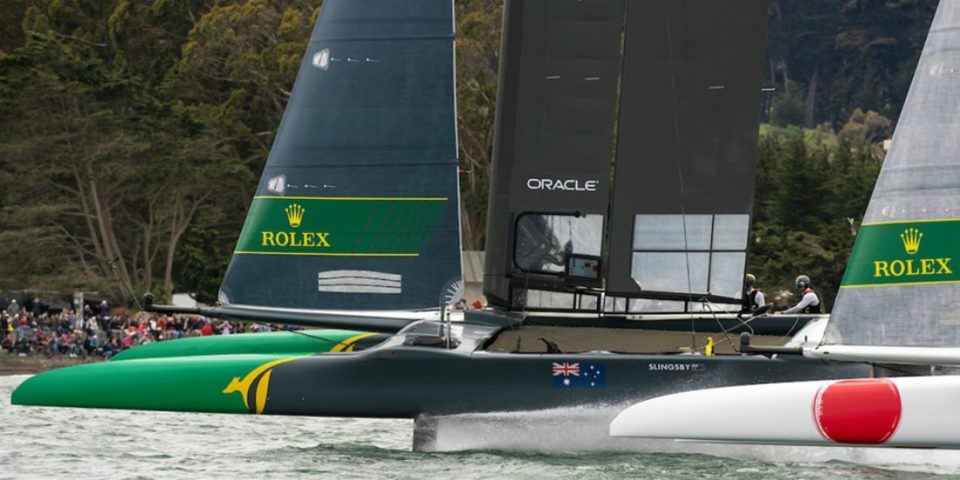 SailGP: Two down and what we know?

The second of the five stages of the SailGP season ended up in San Francisco with the same podium as the first event in Sydney. Victory to the Australians (Tom Slingsby) ahead of the Japanese (Nathan Outterridge) and the visibly improving British (Dylan Fletcher). Tip & Shaft reviews the new circuit launched by Larry Ellison and Russell Coutts.

After two events there seems to be a bit of a hierarchy established, two teams Australia and Japanbetter than the rest. The British boat is improving as evidenced by winning the first of the fleet races on the Sunday in San Francisco. The results that do not really surprise Bruno Dubois, team principal of the Chinese team who were fourth in Sydney and fifth in San Francisco. Dubois, remember, was team manager for Team France in the last America’s Cup and was CEO of the Volvo Ocean Race winning Dongfeng team. “The Australians are the Oracle team of the last Cup, the Japanese are really a mix between Team Japan and Artemis. The English are really strong, with Dylan Fletcher who is a good allrounder, Chris Draper, who also comes from Team Japan. These teams have a lot of people who were strong in the last Cup and they know these boats well.”

The Finals have both been a duel between Australia and Japan. And each time the Final has been won by the Aussies. That may still be a surprise as the French coach Philippe Presti, who works with the Aussies acknowledges. “It would have been logical for Nathan (Outterridge) to be in front of the rankings because he sailed the last America’s Cup as helmsman and he’s really the guy who developed this new F50 along with the same group he had at Artemis, he’s clearly the one with the most experience on this type of boat.” Franck Citeau, coach of the French team, says of Outteridge the Australian skipper who sails for the Japanese team: “For me, the most talented is Nathan Outterridge who seems to do what he wants with the boat, but does it precisely , but he tends to do too much compared to Australians who are real metronomes, very regular, very consistent.”

Behind this top two the British and the Americans made a good impression on the San Francisco waters, especially the Americans who, after finishing last in Sydney, took the fourth place in their home country: “I did not expect to see them at this level  so quickly, especially on waters like those of San Francisco “, notes  Presti. He says some of this is down to the changes to the “flight control” tool which is now a bit easier to handle. He thinks that some including the British, who were able to work on the only simulator available to teams in London were able to up their game quicker: “Now the helmsman can concentrate on steering as it is the flight controller that does that totally, it allows them to really free the helmsman from that part of the job, he no longer needs to manage three dimensions and can just steer while doing a bit of tactics to position the boat properly. We have now set ourselves up too in this configuration, but Tom (Slingsby) takes control in the maneuvers, the Japanese do this a little less. The others do not do it at all, each one acts works to their strengths on board. The training periods are so short that it is hard to change modes.”

With only four days of training before the event in San Francisco it is always doubly difficult for those who did not sail in the last Cup on the AC50s – from which the F50s are a developed. Even if the organization makes sure to allocate extra sessions to teams on this catch up trail, such as worked for the Americans before San Francisco and will now be granted to the French before New York – or Cowes, the French say they would prefer to do this on waters more suitable than the Hudson River. “The Americans did have a little more time to train because they were last in Sydney and the goal is to get everybody up to the same level, and we’ve seen them progress a lot since Sydney. They are the ones who make the best flying tacks of the entire fleet, “notes Bruno Dubois.

The Chinese and the French who, to use the words Dubois, are for the moment part of the “second division” of the fleet. Franck Citeau acknowledges: “We still can not manage the maneuvers like the others, because of our lack of training. Even on the last day in San Francisco that was only our twelfth sail, compare that to Nathan Outterridge was at his … 270th [if we cumulate AC50 and F50, Ed]. In training when the game is open, we are good but as soon as we are racing, the course area is squeezed it gets complicated. We had four flying tacks on about sixty moves that is not great but it is progress.”

Franck Citeau believes that having the France SailGP Team sailing in on the GC32 Racing Tourwould make sense, if they could find additional backers to support this. “We are not the same level as the Australians, we still need crew coordination, to bond and work and live together, sharing as much flying time as we can. And at reasonable cost, there is no better than GC32. We are not going to hire Macif or Gitana “.

On the British front, positive changes are obvious as Stu Bithell flight controller notes “Our performance over the first two events has been great and it is improving all the time. Let’s not forget Sydney was the first regatta in a high performance foiling catamaran for most of our team. In San Francisco after a good training block, we were battling it out with the best which was testament to our whole team’s performance, not just the sailors. Moving forward we need to get our best manoeuvers more consistent and to follow up on the data to make lots of little gains in the run up to New York. The racing is so close already and it’s only going to get closer!”

20,000 spectators in San Francisco. If there was no official SailGP village in Sydney because of the lack of time to organize it San Francisco was on the mark with a village open to the public and an 800-seat paying stand placed along a dock in front of which passed the F50. Deloitte were charged with making a precise spectator count and reckoned there were 20,000 spectators over the two days of racing. There were 563 (paying) spectator boats officially registered with the organizer representing 4 513 people. 1 486 tickets were sold for the stands were sold and 600 guests(partners) attended the VIP area called the “Adrenaline Lounge”, a model to be replicated in Europe, Cowes (10-11 August) and Marseille (20-22 September).