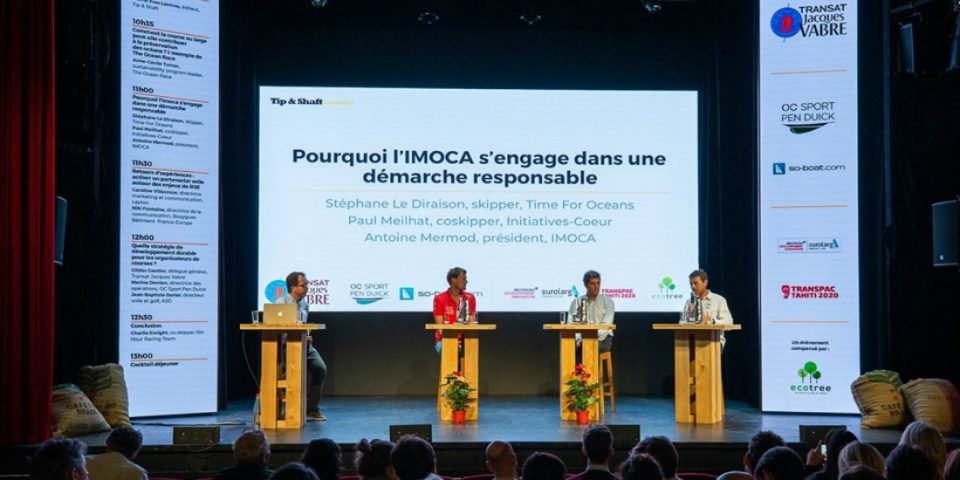 The second edition of Tip & Shaft / Connect Paris took place last Tuesday morning at the Théâtre de la Tour Eiffel which that same afternoon was the venue for the press conference which presented the Transat Jacques Vabre. This is a short recap of the highlights of a morning whose theme was: “Sustainable development and getting the most from sailing sponsorship?”

How can offshore and ocean racing contribute to the preservation of the oceans?

The example of The Ocean Race: The first speaker of this Tip & Shaft / Connect Paris was Anne-Cécile Turner who is head of the sustainability program for The Ocean Race. She lead the discussion about the objectives and activation which are planned for the next edition. The objectives can be summed up in three words: “impact, footprint and legacy”.

“The impact” is about raising awareness among as many people as possible and this will include “ocean summits” (eleven will be organized over the next three years, the first was last Friday in Genoa) as well as educational programs.

“The footprint” seeks as much as possible to limit the ecological footprint of the race. For example, a partnership with Blue Water was initiated on the latest Volvo to ban single-use plastics on the race villages. Anne-Cécile Turner also revealed that on this next edition: “In the sailing instructions we will ask sailors to use a percentage of clean energy on their boats”, while in the long term the aim is to “launch a three-year action plan to improve the sustainable construction of boats”.

“The legacy” part will include an onboard science program called Racing for Purpose which will involve all the teams.

Anne-Cécile Turner summarised that the commitment of The Ocean Race has opened up new lines of financing……”Because it is attractive for patrons or foundations”. The most striking example is that of 11th Hour Racing which will races again in 2021 for their second campaign in a row but now also being a sponsor of the race. The benefits for partners? “A transfer of values which is ​​very effective in terms of credibility, additional media attention (we reach other media that would not talk otherwise talk about us) and the motivation of employees.”

The Figarist Adrien Hardy asked if there were types of partners who might be deemed incompatible with these commitments: “We have a lot of discussions internally, but our answer is that we should not ignore anyone, these brands are also part of solution, the idea is not to make it all one dimensional but to involve them with very clear criteria and real commitments. “

Why Imoca is committed to a responsible approach?

A round table followed with two skippers from the Imoca class, Paul Meilhat and Stéphane Le Diraison, along with class president, Antoine Mermod. Mermod explained that the environmental commitment, “initially spread by skippers who wanted to get a message out,” has now led the class to recruit a sustainable development project manager – Claire Vayer – and now to set up “a program around four pillars: science, awareness, ecological transition and events “.

Paul Meilhat, who is currently trying to set up a four-year Imoca project around the environmental issues (see our article), explained that his commitment has become an approach which appeals to sponsors: “Today, to join a cause and involve people internally has a big appeal. It allows us to offer an alternative to conventional communication. We also can go through the Human Resources or Corporate and Social Responsibility managers, so no longer only just to the CEO or marketing people.”

Stéphane Le Diraison then spoke about his project Time for Oceans which is the the name of his boat which is associated with three main partners, the city of Boulogne-Billancourt, Bouygues Construction and Suez. How did he convince them not to attach all their names to the boat? “It’s a question of conviction, but also because when I spoke about the Vendée Globe to the general manager France / Europe of Bouygues Construction, it was he who spoke to me about the link between the project and the message for the planet, as it happened that fell in line with my own strategy.” What about the fact that Bouygues Construction operates in a very polluting sector? He takes up the argument of Anne-Cécile Turner: “My approach is that we need all businesses.The building generates waste, we too, the question is how to move together and how these companies can change their business? “

And the skipper of Time for Oceans asked Imoca directly to be more much better in the construction of boats: “We need incentive policies,  Imoca can not hold back from setting firm hard and fast measures today, we pollute a lot and we do not know how to go forwards from here. ” Antoine Mermod replied: “We think we need to conduct research on on bio-composites, recyclable sails and autonomous energy. For sure the Vendée Globe 2024 rules and regs will be influenced by these issues, but we do not want to be too prescriptive in our approach.

Within the round table, Caroline Villecroze, marketing and communication director of the Leyton group (1,400 employees), and Niki Fontaine, communication director of Bouygues Bâtiment France-Europe (60,000 employees, € 12.4 billion turnover), discussed their respective partnerships with Arthur Le Vaillant and Stéphane Le Diraison. Villecroze explained that Leyton, a business consulting company, is committed to this same environmental path, as driven by the skipper, but also as chimes with the sentiments of their young employees (average age 30 years) who are already more aware than their older counterparts. She detailed some actions and added that in terms of business, this commitment was a real plus because it allows Leyton to be a more attractive prospect when they come to hire young people. And, more than signing new contracts it is has big values in “customer loyalty” and raising awareness when guests and staff are invited to race starts. Niki Fontaine, meanwhile, added about this link between CSR commitment and business: “I am unable to say if we have signed more projects, but what I know is that our customers talk about it, that we gives real credibility.”

What about sustainable development strategies for race organizers?

The second roundtable was attended by three race organizers, Marine Derrien, Operations Director of OC Sport Pen Duick, Gildas Gautier, General Delegate of Transat Jacques Vabre, and Jean-Baptiste Durier, Director of Tour Voile, who all spoke of their actions in terms of sustainable development. Marine Derrien, for the Route du Rhum, cited the commitment to Catherine Chabaud’s Ocean as Common, the calculation of the footprint of the race and its compensation through a reforestation action as well as educational kits developed with the Fondation de la Mer.

Do they feel pressure from outside to engage in these initiatives and steps? “No,” said Gildas Gautier, “the pressure comes from the state of the planet and sustainable development is one of the pillars of the Transat Jacques Vabre, just the same as the history and the fact that it is a race for duos.”

Asked about the possible development of business through this theme, he added: “No, what interests us more is to create engagement with our partners, to act with them around these themes, not following purely economic themes. ” Jean-Baptiste Durier does not exclude such an approach: “We are not there yet, but the goal in the next two years would be to be able to provide sponsorship packages integrating turnkey CSR actions. Today, all groups must produce CSR assessments, it is a great development path. “

To close this Tip & Shaft / Connect, Charlie Enright, co-skipper of 11th Hour Racing, who will participate in The Ocean Race in 2021-2022 and with Pascal Bidégorry next month in the Transat Jacques Vabre, presented the American 11th Hour Foundation. Their objective is among others to promote sustainable practices in sailing. He added that as the ambassador of this foundation, the team, in which there is a “sustainability manager”, in this case Damian Foxall, had to be the most exemplary possible, hence the choice of hotels near boats during stopovers, meals without meat once a week, participation in workshops on sustainable construction. On the last Volvo, the team “challenged” Musto to reduce plastic packaging. Now they say sustainable development is becoming “a criteria for selecting partnerships”.

Could the project work on partnerships with “polluting” brands? Charlie Enright responded in the negative, saying that 11th Hour Racing could not be associated, for example, with ExxonMobil. But he said neither would the ideal be to have only foundations or organizations as partners of the boats: “No, it is important that sponsors also come from the hard commercial world. If we work only with sustainable organisations and so on then we would preach only to the converted.”