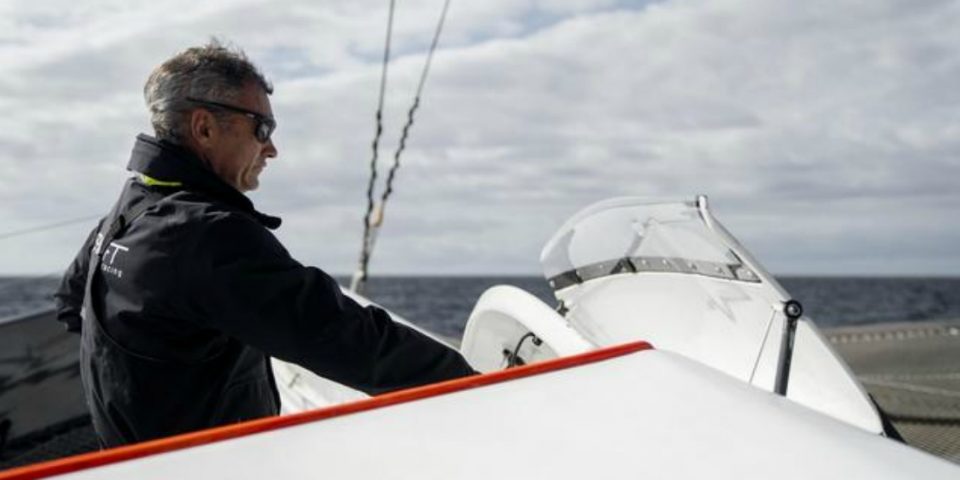 Yann Guichard: “Spindrift 2 has the potential to beat the record”

On stand-by for a renewed attempt on the Jules Verne Trophy since early October, Spindrift 2, which had to turn back a year ago after a rudder failure has then had to stand down from the end of the month as problems with the new rudders emerged and they have had to go into the boatyard. Now, Yann Guichard and his crew of eleven sailors are back on stand-by, hoping for a window before mid-December. It’s a good time for Tip & Shaft to talk with the skipper.

Why did you have to stand down at the end of October?
We detected a problem with the tip of a float rudders that did not allow us to sail at very high speed and that would have caused especially problems within a few days. So we had to put the two rudders back into the yard at Persico in Italy because all the other yards were busy. Since these are big elements it takes time. But we will be operational again on Monday.

This must be very frustrating considering your limited time window this year?
For sure it’s frustrating. But the saving grace I tell myself that we would probably have left with the window that had the Ultims (on Brest Atlantiques) had, that has been the only one and as we see that has not been good in the South Atlantic with upwind. That would have certainly thwarted us and we would have had to turn back as we would not have made Good Hope in time. But it’s true that three weeks being stuck here is always difficult. First of all because it’s not the kind of boat you can go sailing for the day. And because of our plans next year, we decided to compress the stand-by this year. Now, I hope we will have a window soon. But it is does not look likely immediately as the Azores anticyclone is displaced and and there are no real tradewinds.

So will you extend this stand-by which was originally planned only for October / November?
Yes, until about mid-December and a little beyond if you see a window that’s maybe three or four days later. But after that if we leave at the end of December, 40 days takes us to February, we already have a program planned then.

Has the boat changed since your attempt last year?
We just had to update the two float rudders after last year’s breakage of last year (on the starboard rudder fitting); the only difference now is that you can adjust the rake. We got them in early September so we have not sailed much this year but we know the boat very well and I’m pretty chilled.

Are you feeling that for Spindrift 2 is this year or not at all if you are to win the Jules Verne Trophy?
I really don’t know if it’s the year or never. This will be our third real attempt, if we don’t count the dismasting before we started (January 2018), and most of the challengers have been successful on the third time of challenging the record, except Loïck (Peyron, on Spindrift 2, then Banque Populaire V) and his brother (Bruno) who did it on their first time. It’s a very difficult record, but what makes us more confident is that last year, we were out of the Indian Ocean on Idec’s timing even having had a less favourable Indian Ocean. That really means that the boat has the potential to break the record.

Are not you afraid that if you do not succeed this year the latest Ultims will be more suited to it and will likely have a go next year?
It is clear that under certain conditions when they can fly, below 22-23 knots of wind with an acceptable sea, they go four knots faster than us. But this is an endurance race, you can see it now on the Brest Atlantiques, you also have to be lucky and not hit anything. And in the conditions we had last year actually they would not have gone faster than us. If we do not have the opportunity to go this year or not break the record, it could be nice not to be alone on the starting line next year, the boats are very different. It could be a nice story.

Do they interest you, these foiling flying boats?
Yes, it’s interesting. Foiling and flying is very much of these times and is at the forefront of technology. Now we are not a part of this class. We are a boat for records that is not made to be sailed with a small, reduced crew, even if I did the Route du Rhum on it (2014). In fact we would be happy to participate in the races with them but we do not want to be limited in the number of crew as it does not make sense on a boat like ours. They have Ultims that were designed to sail solo so if they are sailing with six they are at 100% of the potential of the boat, whereas we, if we sail with we are not 100% because Spindrift is 23 tonnes compared with 14, so a righting moment of 250 t / metre, against 150. So it takes us so much more to work the sails. It is nothing more complicated than that.

Spindrift is 23 meters wide, like the Ultims, would it be possible to make an it Ultim by reducing the length from 40 to 32 metres?
No, it would still be very heavy. When you see our freeboard height compared to the new Sodebo when we are in La Trinité, we are twice as high! It would still be heavier, the weight would stay and in multihulls it is a battle of nerves to fly. I think the boat would probably not be performing better than Actual

You talk about leaving again next year, does that mean that you intend to keep the boat? There is no chance of selling her in the near future?
The programme for 2020 will be different depending on whether the record is broken or not. We have the “flexibility” of not having a sponsor who dictates in our sporting goals, it is an owner project so that allows us to choose the challenges we want to go for. The objective today is to continue to sail the boat next year. One record that fascinates me and that I really want to have a go at least once, is the Atlantic (owned by this boat, then Banque Populaire V, in 3 days 15 hours), it is It’s hard to beat but I think we can save a few hours.

You have not been racing really do you not miss it?
It’s true that I also like to race against others and that was the good in the MOD70. Now if we do not have the chance to do it with the maxis we have this the chance to do it on smaller boats, like this new TF35.

Tell us about this TF35, successor to the D35. Have you ever sailed on this new flying boat?
Yes we sailed four days and it is a great boat. It flies all the time in 14 knots of wind speed, you fly upwind and downwind. It is like a GC32 moved on to the next dimension. It’s a great challenge, and seven teams have already signed, potentially an eighth. And what is nice is that it won’t only be on the Lake (Lake Geneva). We will probably go around different places in Europe in the second half of the season in 2020 and longer term to attract other teams.

What is the schedule for you?
We can sail on the prototype boat in February in Spain, this is the reason why we cannot postpone the stand-by beyond mid-December. These are very technical boats that require a lot of focus and also very physical.

Do you have other longer-term projects?
I am pretty happy to be where we are with the maxi and this TF35 project, who wouldn’t be? What I do know is that solo racing is not something that attracts me. But there are circuits that do appeal like SailGP, the boats are fantastic. But we cannot do everything and we must have the chance to do it well. But we don’t have a closed door on anything. When there are projects we do look closely as as we did with the Volvo.

And that interested you?
I do not see much synergy in this mix between the Volvo and Imoca. I think it made more sense when it was one design. The last Volvo was really nice to follow. I’m not sure that will be the case next time, the teams that will make the Vendée Globe will not be able to win the Volvo. (The Ocean Race). Of course there had been a Volvo in multihulls as had been mentioned for a while, we would have looked more closely.