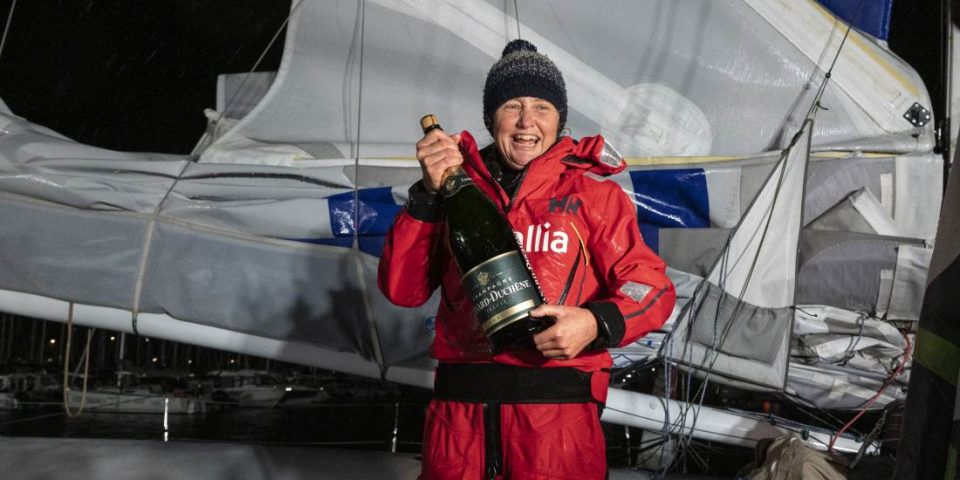 On The Market: Pip Hare with Louis Burton on The Ocean Race Europe

NICOLAS LUNVEN will be Sam Davies‘ co-skipper on the Transat Jacques Vabre aboard Initiatives Coeur which was relaunched on Wednesday in Lorient, while FABIEN DELAHAYE will accompany Isabelle Joschke on MACSF, which will be back on the water next week.

THOMAS ROUXEL will meanwhile be Thomas Coville‘s co-skipper on Sodebo Ultim 3, which will be relaunched at the end of May (and will be equipped with retractable rudders in August), the two sailors will be training up to the start of the double-handed transatlantic with Corentin Horeau and Matthieu Vandame.

CLARISSE CRÉMER, QUENTIN PONROY, FRANÇOIS PERNELLE and LAURENT BOURGUÈS will complete the LinkedOut crew, already made up of skipper Thomas Rettant and Morgan Lagravière, on The Ocean Race Europe (starting May 29 from Lorient). On board Bureau Vallée 3, Louis Burton will race with his partner Servane Escoffier, PIP HARE, Davy Beaudart, Christophe Bachmann, Thibault Hector, Jean-René Guilloux, Baptiste Hulin and, when they return from the Transat Concarneau-Saint-Barth, Arthur Hubert and Clément Commagnac.

ALAN OSTFIELD is the new CEO of US Sailing.

PAUL GOODISON will replace Ben Ainslie who is unavailable due to “long-standing personal commitments” at the helm of the English SailGP team at the Taranto (June 5-6) and Plymouth (July 17-18) Grand Prix.

TIP & SHAFT is recruiting a content and digital marketing project manager to support it in its next developments; permanent position, based in Lorient-La Base, to be filled immediately.

BEYOU RACING is looking for a technician on the electrics / electronics / IT / satellite communication parts, at least 5 years of experience; CDD which may lead to a CDI, based in Lorient, to be filled immediately.

INCIDENCE SAILS BREST are recruiting several sailmakers/workers for fixed-term contracts until the end of January 2022. Salary according to experience.

PIERRE-ÉDOUARD REGAUD offers for enthusiasts or as a communication tool the MIMOCA 120, a scale model of an Imoca with customizable foils, designed for sailing at sea, entirely hand-built in carbon fiber.

CLAUDIA KERGOSIEN, after experiences with Team France Jeune, Windreport ‘(Disobey), OC Sport Pen Duick and France SailGP Team, is available for a mission or a position of communications and partnerships manager. Mobile throughout France.

FORTINET, a company specializing in cybersecurity have committed, alongside Best Western (which is extending its partnership), as co-title sponsor of Romain Attanasio for the Vendée Globe 2024. The latter launched on Tuesday his new Imoca, the VPLP-Verdier design from 2015, the former Malizia bought from Boris Herrmann.

MEDALLIA, Pip Hare‘s title partner in the last Vendée Globe, has confirmed its re-engagement for four years with the British sailor who bought the former Bureau Vallée 2 from Louis Burton.

ERWAN LE ROUX has announced his return to the Ocean Fifty circuit at the helm of Planet Warriors, the trimaran built for Fabrice Cahierc who has given up on the circuit. Le Roux will compete in the entire Pro Sailing Tourin the colors of Ciela Village during the Grand Prix de Brest (May 19-23). He is looking for partners for them and for the Transat Jacques Vabre and the 2022 season.

ORCOM, a chartered accountant, auditing and consulting company, has signed up as a title partner of Jules Delpech on the Figaro Beneteau circuit; the skipper will compete in the Tour de Bretagne, the Solo Concarneau and the Solitaire du Figaro.

ALIX LIVORY BOILLOT and his team of final year MBA audiovisual production students at the MBA ESG Paris school are looking for an offshore racing boat for the voluntary shooting of a fictional short film during two nights at the end of July in Lorient.

11TH HOUR RACING TEAM has published its annual sustainability report and calls on the marine industry to align itself with the objective contained in the Paris Agreement of reducing the carbon impact by 45% by 2030.

TIME is committed to The Ocean Race as an official impact partner, the media group notably joining forces with the Ocean Race Summits organized on the sidelines of the round the world race.

THE OCEAN RACE will organize The Ocean Race Summit Europe on June 16, during which the President of the European Commission, Ursula Von Der Leyen, will speak.

STONEWAY MARINE is the new title partner of the YJA Yachtsman of the Year & Young Sailor of the Year Awards, the winners of which will be announced on September 10.

THE RS21 CLASS was recognized as an international class by World Sailing at its recent Mid-Year Meeting.

EXPEDITION FOODS has signed up as the official supplier of the Global Solo Challenge, which has announced its 20th entry, Australian Brian Pattinson.

Participation requests for exhibitors at NAUTIC DE PARIS (December 4-12) have just opened, they must be sent before July 5.

THE CLASS30 was the subject of more than 25 applications to design and build this financially affordable racer cruiser one-design. The jury, made up of representatives of the UNCL, the Rorc and the Storm Trysail Club, an American yacht club that joined the project, selected 8 who will have to submit their preliminary draft before mid-June.

THE REGATES ROYAL DE CANNES will take place this year from September 19 to 25.

ROMAIN PILLIARD, who will set off next Autumn on an attempt to set a double-handed round-the-world record, will equip his Use it Again trimaran (ex Ellen Mac Arthur’s boat) with underwater microphones to help collect data on the presence of cetaceans, a project carried out in collaboration with scientist Olivier Adam.

THE MIRABAUD YACHT RACING IMAGE 2021 is officially open, candidates have until September 7, 2021 to send their photos.

GOPRO has signed up as a partner of the SailGP circuit this season.

THE AZIMUT CHALLENGE officially joins the Imoca Globe Series calendar which has just been unveiled for the period 2021-2025. In addition, the class will reward, in addition to the sailor who has recorded the most points over four years, a champion at the end of each season.

BARTON MARINE has just launched a new version in white of its range of Quick Cleat blockers.

WORLD SAILING and VIRTUAL REGATTA have announced the launch of the Olympic Virtual Series, in collaboration with the IOC, which has already started on May 13 and ends on June 23.