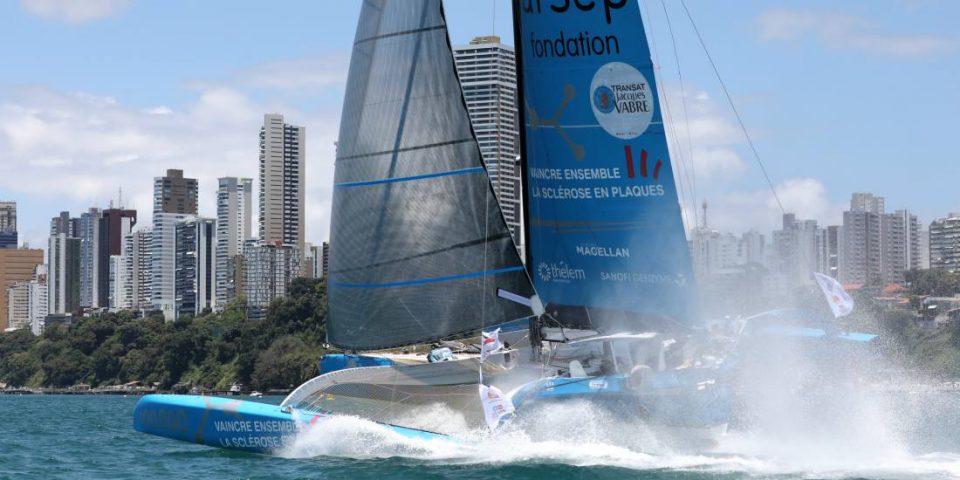 On The Market: The Class Ocean Fifty launched the Pro Sailing Tour

HÉLÈNE NOESMOEN has been selected to join France SailGP Team during the first stage of the Sail GP season late April in Bermuda.

CAPONNETTO-HUEBER are looking for a naval architect specialized in fluid dynamics and conceptual design to become our project and design coordinator and to assist our technical director Mario Caponnetto ; and a computational fluid dynamics expert and specialist of Star-CCM+ with a solid experience in nautical and maritime applications; full time jobs in Valencia (Spain), from March/April.

THE MAGENTA PROJECT is looking for its next chair (volunteer), applications should be sent before March 26.

BEFOIL is recruiting a production manager; permanent position based in Lorient, to be filled immediately.

GRAND LARGE YACHTING is looking for a Mechanical Engineer for its design office for its  development and quality monitoring activities in the production of the Outremer, Gunboat and Ocean Voyager ranges.

YACHTING WORLD is recruiting a versatile journalist (print / digital) to integrate into its writing staff.

FRÉDÉRIC HURLIN, former member of the French Laser squad out of Marseille is a physical trainer working and qualified in different sports (skiing, cycling, triathlon …), offers his services in the field of competitive sailing and is mobile throughout France.

GUILLAUME YVON, currently completing a Masters 2 in International Business Development at Eklya Business School is looking for a first job from July 2021 in the field of competitive sailing in commercial / marketing development and project management. Mobile around France and abroad.

AIM45 offers a developer’s internship for its data analysis  web platform, a 4 to 6 month internship based in Nantes.

GEOFFROY DARDONVILLE, a 1st year student at the engineering school of Mines de Nancy, is looking for a working internship from June 14 to July 10 2021 in composite materials at a boatyard (offshore racing preferably).

THE SAEM VENDÉE presented last Monday the main numbers of the ninth edition of the Vendée Globe.

DEFI PURE OCEAN : there is one place left to participate on board the JP54 of Jean-Pierre Dick to the Défi Pure Ocean between Saint-Pierre and Miquelon and Lorient from June 13.

LA SOLITAIRE DU FIGARO 2021 ROUTE was unveiled lastThursday. It is 2,488 nautical miles long and  will include four stages, from Saint-Nazaire (starting on August 22) and finish in Saint-Nazaire (due September 16), passing through Lorient, Fécamp and the bay of Morlaix.

THE RACE AROUND, which will be run in doubles and also now solo, has signed a partnership agreement with the Class40 to guarantee the race’s continuation beyond the first edition in 2023. The number of entries has been opened up from 25 to 35.

THE SNIM 2021, which was to take place over Easter weekend in Marseille, is postponed from October 29 to November 1.

THE MASSILIA CUP‘s 39th edition has been rescheduled at the weekend of September 25-26, instead of the Duo Sail.

UNCL AND SRR have teamed up to organize an IRC event that will start on June 3 from La Rochelle, with two courses, the first, of 350 miles will be the Gascogne 45/5 (which was initially planned for the end April, will not take place), the second on a new route called Cap 45/11 (750 miles).

THE FOILS JOURNÉES DE L’ENVSN scheduled from April 17 to 19, has been postponed until the fall, “to the best extent possible”.

THE MELGES 24 WORLD CHAMPIONSHIPS, scheduled for April 9 to 17 in Charleston have been cancelled and instead the Melges 24 Gold Cup will be held.

THE EUROPEAN SENIOR AND U23 FINN CHAMPIONSHIPS which were to have been held during Hyères Week (canceled), will now finally be held from April 10 to 16 in Vilamoura (Portugal).

CLARA AUTOMOBILES, a Peugeot dealer, are the new vehicles partners of the Charal Sailing Team.

AGREKKO, the world-leading provider of mobile modular power, temperature control and energy services, has signed a three-year partnenrship with SailGP.

THE YACHT CLUB DE FRANCE partnered with the RORC and the International Maxi Association to promote the next Transatlantic Race.

THE CLASS OCEAN FIFTY, new name of the Multi50, has launched on Tuesday in Paris its new Pro Sailing Tour for the next eight years. This circuit will include every year five or six events (one 24 hour race and two days of Grand Prix), the first season in 2021 will go to Brest (5-9th May), la Rochelle (26-30 May), Las Palmas de Gran Canaria (30 June-4 July), Marseilles (21-25 July) and a final crewed offshore race (3 crew members and one media man) between Marseilles and Brest (1-7 August).

SAILGP has launched a call for applications for cities wishing to hose the F50 circuit in 2022 and join the eco-responsible initiatives promoted by the organizers.

THE LEYTON SAILING TEAM and the MAGENTA PROJECT are launching a training series for women wishing to go offshore racing especially in multihulls. The first, led by Elodie-Jane Mettraux, will take place from April 20 to 22 in La Trinité-sur-Mer, two more will follow in the Mediterranean and in Great Britain.

THE TRANSAT JACQUES VABRE NORMANDIE LE HAVRE, with Saint James as partner, launched the Cap pour Elle operation, intended to financially support a women’s project in the double-handed transatlantic; candidates have until April 15 to submit their application.

THE MINI TRANSAT 2021 has launched the BLUE LABEL initiative which encourages participants to adopt behaviour that are respectful of the environment and to make young people aware of the need to preserve water, health and all living things.

LALOU MULTI has confirmed the start of the construction of a Class40 (Lombard plan) for Keni Piperol partly made in recyclable materials.

THE IBIZA JOYSAIL REGATTA, a new race reserved for maxi-yachts (24 metres minimum), will take place from June 17 to 20.

WORLD SAILING has launched a call for testimonials from women working in the field of sailing for its Steering The Course festival, intended to open up sailing to more and more women and girls.