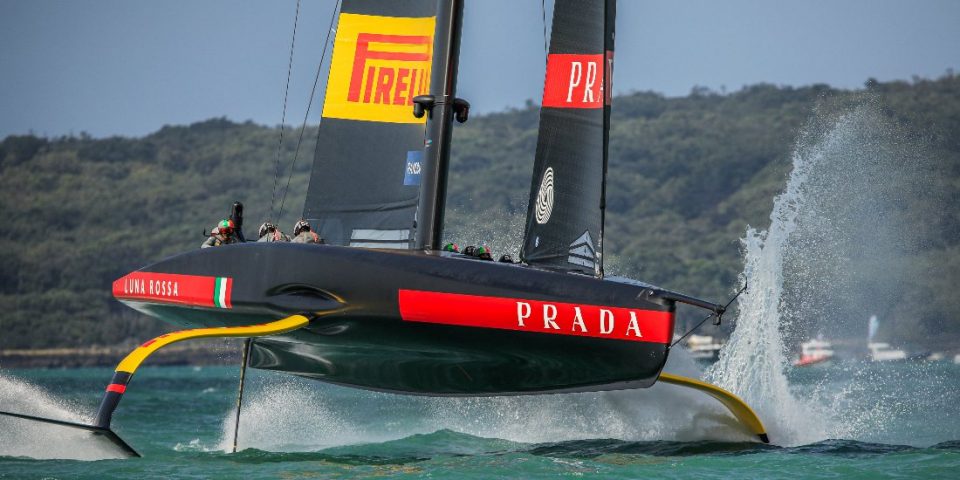 Philippe Presti: “The Cup is the ultimate team sport”

At 55, Philippe Presti, who rose to prominence through Olympic sailing (Soling, Finn and Star), is now one of the best French specialists in the America’s Cup arena. One week before the start of the Prada Cup (January 15-22 February, see program), the sailor from Arcachon who is now a coach at Luna Rossa Prada Pirelli, talks to Tip & Shaft about the 36th Cup which is to be raced on the new AC75.

What are the main lessons that you have learned for the Italian challenge from the recent America’s Cup World Series?
In my opinion, the truth is that The World Series is completely different from what we are going into and so all the lessons we could learn from it are obsolete today. Especially since the AC75s are great boats but complicated in terms of balance, so that the smallest stability deficit can greatly affect the performance of the boat and hide its true qualities. For example, we saw the English in difficulty in particular because of problems with their canting control system for the of foil. And because of this we didn’t really show what they had under the hood. And correspondingly we haven’t shown our last foils yet, we have three mainsails that are going to arrive, full of developments in progress … What counts here is how the teams will move forward and the rate and magnitude of their progress over the coming weeks until the last round which is the one to win. You have to manage to progress to reach the absolute peak of development at exactly the right time.

What areas for improvement have you noted for the Prada Cup?
They are everywhere ! For example, we didn’t feel super at ease in the strong breezes, so we took advantage of the Christmas period to work on these points and we feel we have made good progress. Clearly, when we see our performance today and that of a month ago, there is an improvement of 10-15%, or even more, we imagine that the others are in the same scenario.

Will you be continuing with two helmsmen (Jimmy Spithill and Francesco Bruni)?
Yes, certainly, that’s the way we work and we’re pleased with it. It allows us to be flexible and react quickly in terms of tactics and strategy and in particular in close contact racing. This causes a big challenge communicating with one another, so that the one not on tack, who is in charge of the foil can concentrate on how the boat flies, while having a good idea of what it will be like when he is back at the helm.

Can you describe the link you have with James Spithill?
I have known him since before Sydney 2000. He did some Soling, while we were preparing for The Games with Jean-Marie Dauris and Pascal Rambeau; one morning, we trained with a youngster. That was Jimmy! We established a good relationship between 5 and 7 in the morning before he went to school. We then got together in the Cup in 2003, when I was at the helm of Areva and he was skipper of OneWorld. After that campaign, when he was hired by Luna Rossa, he did what he could for me to join him to helm the second boat. I was a sparring-partner, and gradually, I became a coach, like a trainer-player. When he joined Oracle in 2007, he asked me to help him win the Cup in 2010 on the big trimaran (USA 17), and I stayed there for the next two. So it was quite natural that I remained with him for this new adventure. We work well together and trust each other delegating responsibility. It’s great working with him, because we really have the impression that I am working WITH him and not for him.

“Our goal is clearly to win the Prada Cup”

What are the keys to success when racing an AC75?
What is really important is the ability to move to something else quickly. For example upwind, the VMG (velocity made good) can be obtained by either sailing faster at a lower angle, or by sailing more slowly at a tighter angle. What is going to be very important is the ability to move from one mode to another to find the puffs of air and shifts to cover the opponent. On faster boats this ability is even more important. The fact that you start upwind also means that the start is more important than in the previous edition. If you set off windward with a slight lead, there is a strong chance that you can control the situation at least until the windward buoy, which means the first quarter of the race. Another key element is that you have to avoid breaking anything. These are complicated boats, which may have technical problems that affect overall performance. We saw in a race against American Magic that Team New Zealand had a hydraulic problem which clearly handicapped them. Finally, the ability to continue to learn throughout the competition to reach the optimal level in terms of development as late as possible will also be a key element, remembering however that you have to get through the first rounds.

The Prada Cup starts on 15th January. Are you feeling a lot of pressure in the Italian team?
When you compete in the Cup, it is to win it, so obviously, the pressure is on, and if you are allergic to that, you don’t do this job. Our goal is clearly to win the Prada Cup. We can possibly cope at the start and then win at the end, but that could have an impact on the development phase, as if we are forced to spend ten days in the semi-finals, we won’t have the time to focus on the tests and try new components afterwards, so it is better to do well from the outset.

After the ACWS, the NZ media seemed fairly confident in the chances of the defender. What do you think?
In the World Series, the Kiwis seemed to be at the right place in their programme, which started earlier, as they came up with this type of boat. They are bound to be a bit ahead, but will they manage to continue to develop their boat like the others? That is the key to success in this event. They do have a talented team relying on people who won the last Cup, real talent like Pete (Burling), Blair (Tuke), Glenn (Ashby), Finn world champions as grinders… Among the sailors, there aren’t many you would not want if you were setting up the dream team. But we have no reason to be jealous and I think we can prove that out on the water.

“What motivates me is working with others and sharing things”

Over the past 20 years, you have become a real expert in the Cup. Why are you so attached to it?
Firstly because I love team sports and for me the Cup is the ultimate team sport: you have to find the funding, get people working on a project, design a boat that performs well that will then be built by a team of technicians and after that the sailors take over. It is a huge challenge in terms of leadership and management. Apart from that it is really exciting technologically. I am incredibly lucky to be part of the generation that got boats flying. If we had stuck with the Class America heavyweights, I probably would not be so enthusiastic. We went from 25 tonne boats sailing at 9 knots to planes flying at 50. this new way of sailing is incredible.

France is known for its ocean racing. You have never been tempted?
My only experience was the Tour de France sailing race with teams from Aquitaine, in particular with the sailor who is leading the Vendée Globe (Yannick Bestaven) and his technical director, Jean-Marie Dauris. Apart from that, after the 2010 Cup, I thought about doing some Figaro racing and called Michel Desjoyeaux for some advice. Franck Citeau lent me a boat, and I sailed for a month in La Grande Motte, but I soon stopped. It’s not so much that it was offshore, but more because it was solo sailing. What motivates me is working with others and sharing things. I did some work with Thomas (Coville) before his Jules Verne Trophy and I felt more at ease in a project like that. When looking offshore, that aspect interests me much more.