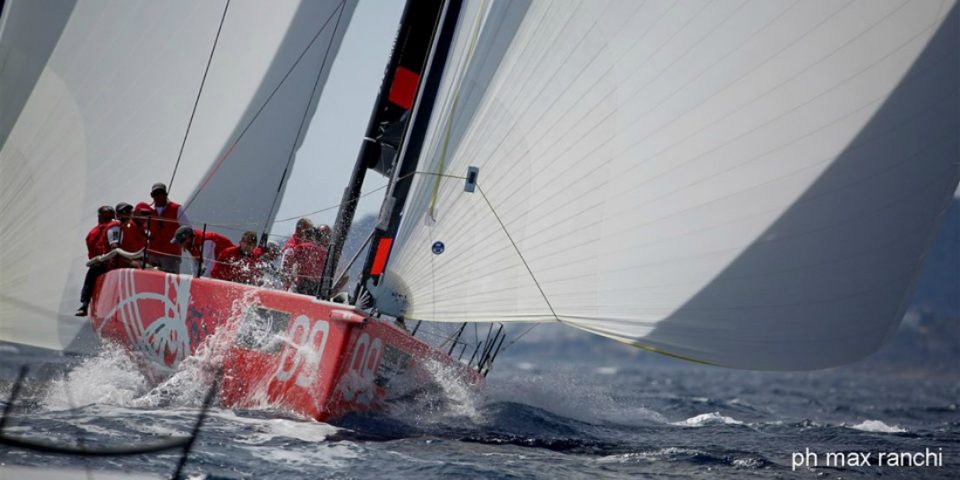 On the eve of the 2019 52 SUPER SERIES Tip & Shaft caught up with Nacho Postigo (ESP), navigator on Provezza and one of the original founders of the class in the Med back in 2004-5. He won the inaugural Med Cup on Pisco Sour and was one of the originators and managers of the Med Cup. Formerly a Cup navigator with Mascalzone Latino, Postigo is also a successful Superyacht racing navigator, currently also races in the ClubSwan 50 fleet as well as recently doing a couple of Mini650 seasons.

Nacho, you have been with the TP52s for so many years, how do you see this year shaping up?
Well if anything it looks like a year which should be windier and more exciting than recent years. Menorca could or should be breezy with some sea, then Cadiz and Cascais are usually good for wind and then September in Porto Cervo. That will be the biggest feature. I don’t think teams will necessary mode for a stronger wind season though, unlike last year where everyone set up for the light winds expected in Croatia at the first two events and then went from there, some therefore were not so good in the stronger winds. But we might see some different spinnakers in the breeze.

Do you think the changes to the Quantum Racing line up and the absence of Terry Hutchinson really will open the doors to other teams taking the title?
Hmmmm, let us wait and see. For sure during the training regatta in Valencia in March they had ‘just landed’ and were just getting themselves together and were not that impressive but by last weekend at PalmaVela they were the same as we are used to…strong. Alternatively in Valencia Azzurra were strong but in Palma really did not start well and finished up strongest. But the thing is, and we hear it so often, is that in this fleet a metre here and there, the smallest detail, one decision which is not perfectly timed, can make all the difference. Platoon had a couple of bad races – one penalty – in PalmaVela and had a few over the course of last season. The whole season is about holding a high average. And Sled were super strong in Palma (They missed two races due to a medivac) and would have likely won had they not had to miss races. But they won’t have Murray Jones at some regattas and he brings a touch of magic. It is going to be an interesting season.

You select carefully the other circuits and regattas you sail, where do you see the 52 SUPER SERIES right now?
It is still the pinnacle monohull circuit with the best people and the best boats. The heritage is born from the 2007 America’s Cup, we are using the same tools, the same level of training. And that is good for the quality of the racing which is second to none and we have a strong group of owners who are motivated enough, really enjoying their racing, to spend quite a lot of money while they still know they the chance to finish in the middle of the fleet or, sometimes, nearer the back.

But getting new owners in is a problem?
I think it depends on your viewpoint. It is a particular level, yes, and it is hard to come in to and do very well. But look at the French team just now, it is not easy to come in and know you might get hammered often, but come in and do two or three regattas on the Circuit and you learn so much, when you then go back to other regattas your standard has moved up so much. You have to come in and be humble and with no great expectations and you will learn an awful lot which will be evident when they go back to race at Copa del Rey, Palma Vela or Saint Tropez. But this is the best racing there is.

If the circuit goes to South Africa and then perhaps to the America’s Cup in New Zealand in 2021, supposing, that would likely mean the rule would need to be frozen as there would be too limited a time window to build new boats, would that be a good thing or a bad thing?
That could be a good thing. It is hard to judge. In 2018 (when there were nine new boats built) it was hard to get a build spot in good yards, that was a bit crazy. But a new boat is always better and we built boats in 2015 and 2018 and it was good for the class. There is always an incentive to build new, though, and owners would find a way to do it if they really wanted to. But right now the boats are perfect. We could go lighter displacement handle losing a little off the bulb and with a little more draft for the same righting moment and so increased performance.

You have been racing a fair bit with the ClubSwan 50s, compare and contrast? And is there any prospect of CS50 owners graduating to the 52 SUPER SERIES?
It is such a very different, very controlled environment. It is a tight one design, owner driven, measurement is very controlled, there is a limit on the number of sails and the number of pros and the owners appreciate that and feel secure in that environment, there will be no sudden increase in spending which is all relatively capped. The boats are good and the level is getting quite high. In saying that, though, the owners are generally a bit younger – younger in terms of their sailing experience and their competitive sailing mentality – and so maybe in a few years some might move up into the top league.

Is it a worry that the TP52s are mainly older, more experienced pros and there are not many openings for younger sailors?
It really is about experience and fitting in, especially as you get to the back of the boat. It is not only about strength and fitness.

The 52 SUPER SERIES was born in 2012 rising from the ashes of the Med Cup. The 2019 season starts on Tuesday off Mahon, Menorca with ten teams due to line up. The newest boat is the freshly launched Botin Partners design Bronenosec Gazprom of Russian owner-driver Vladimir Liubomirov which debuted, just days after launching, at last weekend’s Sail Racing PalmaVela in nearby Mallorca.

Newest team are Jean Jacques Chaubard’s Team Vision Future, a mainly amateur group who are making the step up from multiple successes in mixed fleet racing in the Med to the white heat of the 52 SUPER SERIES. Their compatriots on Paprec are understood not to be participating this season. Commitments to the 36th America’s Cup have seen last year’s Prada backed Luna Rossa leave – their boat is reported to be still for sale if anyone is looking for a competitive turn key project – and American Magic’s Terry Hutchinson, Dean Barker and ETNZ’s Ray Davies are all now entirely devoted to Cup preparation and will not be on the SUPER SERIES tour.

In to the hot seat as tactician on the 2018 championship winner Quantum Racing is Cameron Appleton, a 52 SUPER SERIES first timer, one of five line-up changes which include America’s Cup winner Ed Baird back as helm after spells with Gladiator and Phoenix. Legendary Spanish navigator Juan Vila has won the Volvo, the America’s Cup and TP52 world and circuit titles and has returned to Quantum Racing.

There are two South African boats in the shape of the Plattners’ – father Hasso and daughter Tina’s Phoenix 11 (2018) and Phoenix 12 (2014) and there are moves afoot to try and host two regattas in Cape Town in 2020, a move which would be popular with the iconic sailing city which will not be on The Ocean Race course. They have been two boat tuning and training and Tina’s team proved competitive at the recent PalmaVela regatta in Mallorca.

Platoon are widely tipped as the team with the most chance of ending the Quantum Racing (four titles) and Azzurra’s (three titles) duopoly. Harm Müller-Spreer’s crew combines the metronomic consistency of John Kostecki with the free thinking Spanish maverick Jordi Calafat and uber trimming team of Dirk ‘Cheese’ De Ridder and Ross Halcrow. The trio Kostecki, De Ridder and Halcrow won the Volvo and the America’s Cup together.

Azzurra, the Italian-Argentine team racing for the Yacht Club Costa Smeralda, won the last regatta of the season and finished strongest through the second half of PalmaVela. Multiple Olympic medallist Santiago Lange is tactician on Azzurra. The two Vrolijk designs – Provezza and Platoon – have had new keel fins and rudders fitted over the winter, the Botin’s new bulbs and some have new rudders. Some of the Botins have stiffened their internal structure to accept the higher forestay loads.