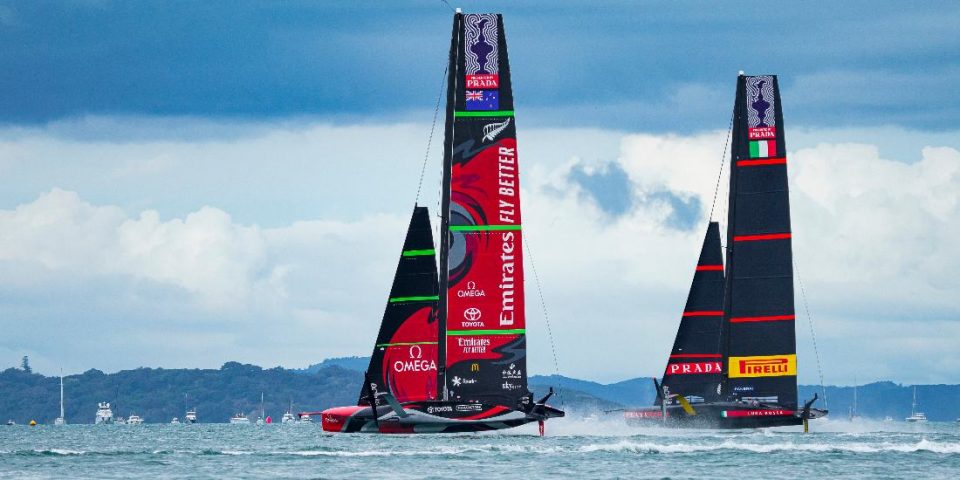 Bruno Troublé: “There will be no going back”

Consultant to Prada during the 36th America’s Cup, the former helmsman for Baron Bich and organizer of the Louis Vuitton Cup, Bruno Troublé speaks with Tip & Shaft about this 2021 Cup, an event which he is clearly a fan of and robustly defends.

So Bruno was this 36th America’s Cup a success?
Yes it was great. When we speak to sailors like Ben Ainslie, Jimmy Spithill, or indeed anyone who watched the racing here everyone was universally enthusiastic about these boats which have proven to be less dangerous than we maybe previously thought. We were very scared at the start because these are all machines which are doing 44kts boatspeed in 12kts of wind but for all that we saw them capsize more slowly compared to a catamaran. The only risks we really feared were head on collisions or clashing foils, but they have on-board system that allows them a kind of zone of virtual security on their screens to see if the foils are too close to each other. That was also used by the umpires to decide the fouls. So apart from the accident with the Americans, which in itself was very dangerous, Terry Hutchinson himself told me that he would drown as he was stuck under the sail, there was not a single really serious incident. There was proper match-racing between boats which lose next to nothing when they tack or gybe. We had racing in 12-13 knots of wind when the average speed during manoeuvres was 37 knots!

Do you think this AC75 Class has a bright future ahead of it?
Yes, there will be no going back, but however there will undoubtedly be modifications to the boat. There are suggestions we could reduce the number of grinders – eight is a bit much – that would reduce costs a bit, because what is expensive in these programmes are salaries. And on board, there are three or four sailors who are only producing energy to run the systems, and so maybe there is a  way to replace them with battery power,

How do you feel about Emirates Team New Zealand victory?
I think it was expected even if the Italians have sailed better, at least at first. It was all about that day when they were in the lead twice and finally lost both races. They could have gone 5-3 or 4-4 but going to 3-5, and then as is often the case when a boat starts winning, it’s hard to stop them. Especially since at the end the speed advantage was to the New Zealanders. Their boat was heading lower but it had a good VMG by around 2 knots. When you are behind that was often the case with the Kiwis you have to really go fast to get through, they managed to do that.

“It is all a game of poker”

How was the atmosphere in Auckland?
It was a real party, people love the America’s Cup here. There were races that saw 17,000 spectator boats on the water it was mind blowing! New Zealand has a population of 4 million there were days when the TV audience was 800,000 viewers so that is 20% of the country, that’s huge, pro rata for France that would be almost 15 million. And this enthusiasm was also very strong in Italy in the I believe there were 6 million people in front of their TV at 4am. This proves that America’s Cup, if we discount the Vendée Globe, which is more of a social phenomenon the Cup remains by far the most famous and legendary sailing event brimful of stories of people who have dedicated their lives, their energy, their fortune, trying to earn it for 170 years.

Ineos Team UK was accepted as challenger of record. What do you think about that?
It’s great. Jim Ratcliffe (head of Ineos) is up for it and in fact, he is the wealthiest man in the country. You can see he is caught up in the excitement for the Cup, but while respecting its history. I don’t think they will do anything crazy as challenger of record.

People have been saying, including Grant Dalton, that a challenge between the Brits and the New Zealanders is a possible outcome…
For me, it’s a bit of a joke. I had Grant on the phone again yesterday (Tuesday). He told me there were a lot of options, but that isn’t the one he favours. In fact, it is all a game of poker to get the NZ government to pay up, which explains why Team New Zealand, who are losing Emirates as their sponsor, are threatening to hold the Cup abroad. The most likely outcome is a post Covid America’s Cup organised quickly in November 2022, here in Auckland, with the present teams, so that they don’t get taken apart. That’s also why the New Zealanders spoke so soon about tightening up the nationality rule. They want to avoid a ploy like Bertarelli used and which harmed them so much (the head of Alinghi hired a lot of the New Zealand crew for the 2003 Cup – editor’s note). I’m fighting hard now so that the eight existing boats can be used by the new teams, which would mean doing away with the rule concerning the place of construction for the boat, which in my opinion, serves no purpose now. If we did that, the boats could be used by new teams.

“I’m dreaming of getting it up to eight teams”

So, have you heard about any new teams popping up?
It’s hard to say anything with certainty today. What is certain is that alongside the Kiwis and Brits, the Italians are going to continue, as will the Americans. I can see two or three more and I’m dreaming of getting it up to eight teams.

What about a French challenge?
I don’t feel very optimistic. The secret of the America’s Cup is finding a patron at the start who will pay for a third of the project and that allows you to get things moving. After that, it is much easier to find sponsors. In my opinion, you can’t get a project up and running without that input from a private investor.

Like Patrizio Bertelli with Luna Rossa Prada Pirelli. Did this campaign cost the Italians a lot, seeing they also organised the America’s Cup World Series back in December and the Prada Cup?
No, they spent about the same as the others, 120 million euros for the team budget and around 20 million for the Prada Cup, which for me is by far the best investment in the Cup. I am well placed to talk about that, as before, I took care of the Louis Vuitton Cup, which got a huge amount of coverage. Prada won’t be continuing next time, because things didn’t go well with the New Zealanders, but I think the organisers won’t have any problem in finding someone else.

Is it always going to be difficult between a defender and the challenger of record?
It is when you are both organiser and challenger of record. That can’t work as it is a rotten set-up. I saw that everyday here and it was very difficult. The secret of the long-lasting partnership with Louis Vuitton is that we never backed a team, even though we had many opportunities. Some people, including within Vuitton, wanted us to put some money into a Japanese or Chinese team, but we never agreed to that. So, for things to go well, the future sponsor needs to be separate from the teams.