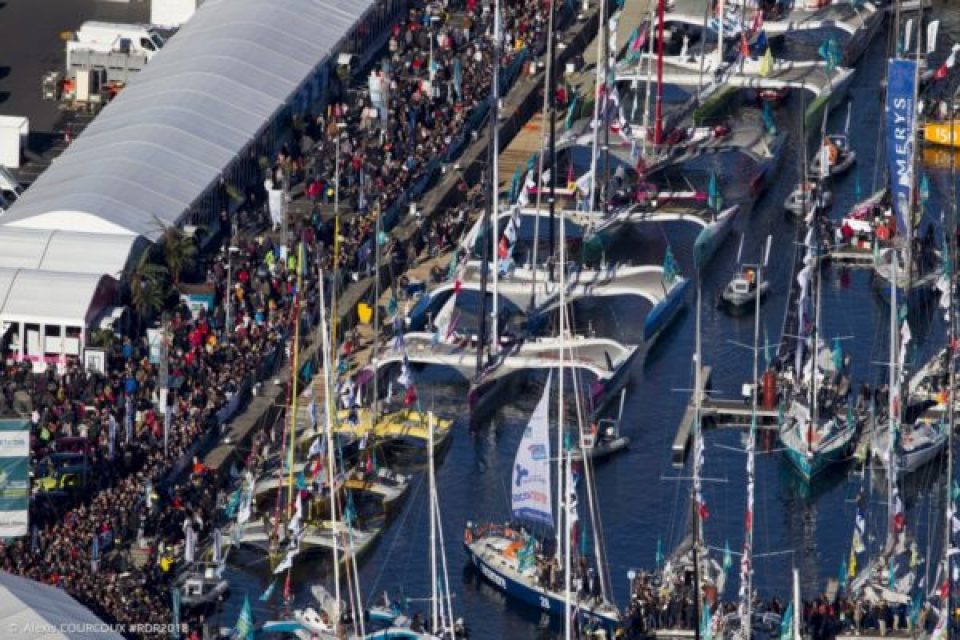 After the ULTIMES and IMOCA last week, Tip & Shaft rounded up a posse of experts from the the Multi50s and Class40s to tell us who their favourites are to win the Route du Rhum-Destination Guadeloupe. They are Tanguy Leglatin, whose Lorient coaching programme has produced many favourites in Class40, Franck-Yves Escoffier, triple winner of the Route du Rhum and the Transat Jacques Vabre in Multi50, Sam Manuard, naval architect who is designer of the Mach40, Karine Fauconnier, navigator and router of the Multi50 Arkema, Yves Le Blévec, 4th in Multi50 in 2014, Jean-Christophe Caso, Class40 sailor since 2006, and journalists Pierre-François Bonneau,Philippe Eliès and Jacques Guyader.

Of the six boats registered only five of them have foils and, for our experts, three stand out:

According to our panel Erwan Le Roux,  the skipper of FenêtréA-MixBuffet could win again and so achieve the double on the Route du Rhum. But he needs to be wary of Lalou Roucayrol (Arkema), his main rival in recent seasons, and the newcomer, Thibaut Vauchel-Camus (Solidaires en Peloton/ Arsep) is a hot tip

“My prediction is that the race will be between two boats’ says Franck-Yves Escoffier, “If they make a Northerly routing the fastest upwind should be FenêtreA-MixBuffet, The other route will benefit the lightest boat and that is Thibaut Vauchel-Camus, even if he still lacks experience in Multi50. “.

Racing Escoffier’s old boat which is now equipped with foils, Erwan Le Roux knows his machine perfectly. And after eleven seasons in Multi50, Lalou Roucayrol is desperate to finally be on the top step of the podium after always being on the podium.

Yves Le Blévec points out: “Erwan is the one with the most experience, but Lalou Roucayrol has come a long way in terms of potential. The last races were very tight. »

It is evidently hard to measure the real potential of newcomer Thibaut Vauchel-Camus some give him a lead, most place him on the podium :

“Thibault has an excellent boat and is a multihull specialist [He has been several times champion of France F18, Ed]. Four years ago, when he raced the Route du Rhum, he was a newcomer to solo racing and finished second in Class40. He has the raw, sailing talent,” notes Pierre-François Bonneau.

As for Armel Tripon (Réauté Chocolat), on the former Actual which is a solid Verdier design which is comfortable in the breeze, two of our experts have him on the third step of the podium.

With the rule revised in 2016,  Yves Le Blévec notes, “The boats are now very similar, but the weight is still a deciding factor. And the only one with the minimum weight is Erwan’s boat, it is an important criterion of speed”.

The Multi50s having gained stability because of the addition of foils but they need a lot of attention in winds over 18 knots. In particular the passage of a front, between Tuesday and Wednesday (according to the routings of Thursday morning), could determine the final ranking.

“No boat stands out in this class which has taken a long time to build,” says Karine Fauconnier. “On an autumn course across the Bay of Biscay, it will be very hard to get to win into  Guadeloupe. ”

The course record (11 days and 5 hours), established four years ago by Erwan Le Roux, should be beaten.

“With the foils now that is logical, if the boats hold up. The fleet is more homogeneous than in 2014 and they will really need to push to win. But the important thing is to reach the finish in Guadeloupe, “concludes Franck-Yves Escoffier

It is hard to predict the Class 40 podium of the Route du Rhum-Destination Guadeloupe.
With 53 starters this is the biggest fleet with the greatest ever depth of competition. A dozen contenders are reckoned to have a fair chance of winning. It is the biggest and the most international of the six classes. Two skippers stand out in, both with new boats. Nicolas Troussel (Corum) and Yoann Richomme (Veedol-AIC).

“They are both former winners of the Solitaire du Figaro, they know the rhythm that will deliver for them”, says veteran journalist Pierre-François Bonneau. Philippe Eliès concurs about the Figarists. “Troussel and Richomme are ahead of the pack. On La Solitaire you know how to handle the transition phases and manage yourself, they have the experience of premier division playerswhen the others compete in the next division down.

But all our experts agree that they will not be alone in fighting in front of: “This is the class where there is the most racing and where the level is the most even at the top”, explains Tanguy Leglatin. “The rule is relatively well done and the potential of the boats is fairly even on one long race like the Rhum”.
“There is a great level!” adds journalist Jacques Guyader, “Aymeric Chappellier seems to drive his boat well after winning the Transat Jacques-Vabre with Arthur Le Vaillant is alos good. The harder the race is the more Kito de Pavant is, he is in the game. As for Yoann Richomme, he has a great boat which he has obviously found keys to quickly. (He won the Dhream Cup, Ed]. ”

For Sam Manuard from the start of the Route du Rhum there will be some attrition of  the  Class40: “It will be an elimination race. When the conditions are difficult it is so important to manage the boat and the equipment without breaking it. That will be evident quite quickly.  Maybe six to seven boats will drop out relatively early. ”
That analysis is confirmed by veteran Class 40 sailor Jean-Christophe Caso:

“They will have to negotiate a front with 40 to 45 knots of wind. Those who come out in the best shape with the boat in the best condition should be in a position to then go on and win”.

Others who are quoted by our experts as being able to sail a good Rhum given the expected conditions are Louis Duc, Loïc Féquet or Luke Berry, who are solid underdogs.

One of our surveyed experts takes a measured risk of naming the British Sam Goodchild as a challenger for the final victory:

“It is the skipper who has the most experience, most know-how, who has a good boat and a particular finesse that does not necessarily prevail for, for example, Phil Sharp”, suggests coach Tanguy Leglatin.