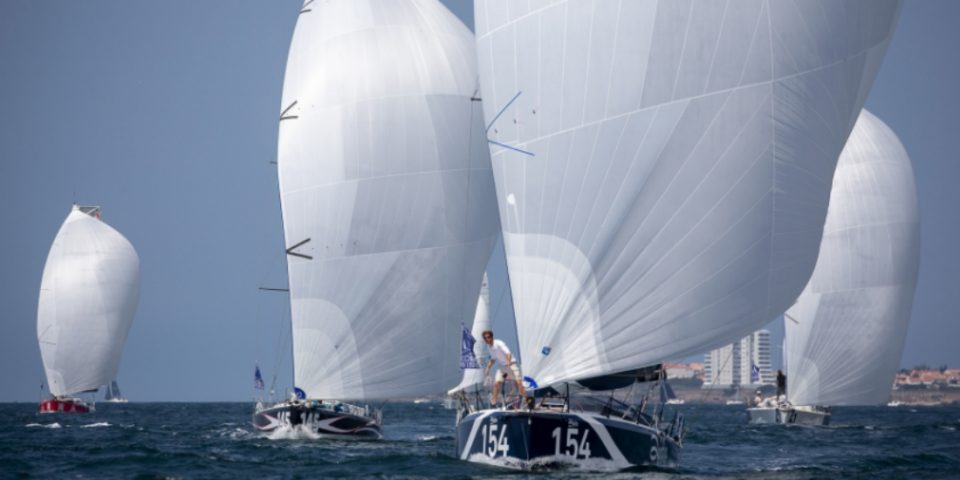 Round the world races raining down on Class40

They’re like buses. You wait seven years for another Class40 race around the world to appear and two come at once, one announced less than one month after the other. First to show was the Globe40 round the world, two handed race in eight stages between 2021 and 2022. Now Class40 has another round the world, two handed race, The Race Around, revealed by British Sam Holliday and New Zealand Hugh Piggin this week. How did we get here? What do skippers think? Tip & Shaft tries to understand…..

For a few seasons now Class40 has been considering the organisation of a major, global pinnacle event, stepping up from the Transatlantic four yearly classic Route du Rhum “The Class40 lacks its pinnacle test but we are working on it, I wish we could say something before the Route du Rhum,”, the Class president Halvard Mabire said to Tip & Shaft in February 2018.

While he could say nothing concrete then, now within one month two round the world races come one after the other. Manfred Rampsacher announced on June 11, and the British-New Zealand duo Sam Holliday / Hugh Piggin (organizer of the Atlantic Cup) announced last Tuesday. Sirius Events’ goes in 2021 and will comprise eight stages on a new, original course (including Mauritius, French Polynesia and Ushuaia) and it will be known as Globe40. The second race, The Race Around, follows a more traditional course passing the three great Capes and will be a four stage race going in 2023.

“Having worked in Class40 for a number of years, specifically with Halvard Mabire and Miranda Merron, I’ve been aware of the desire for a signature event to run alongside the Class40 Championship for some time. A classical course, encompassing the three Capes made sense to us. We firmly believe that the Class40 fleet has developed dramatically with regard to talent, design, build and perhaps also importantly the desire for a race such as this.” Sam Holliday tells Tip & Shaft of their The Race Around.

The Race Around was not necessarily planned for 2023. “We knew that people have been thinking about it for a long time and now it’s true they both are revealed at the same time but all in all it is good news. And from the moment Manfred announced his project before he had the first dates,” says Halvard Mabire. Manfred Ramspacher adds: ” Originally I had planned to announce the Globe40 earlier but because of different circumstances I could only do so in June. ”

Class40 has had no round the world since the Global Ocean Race which was originally launched by Josh Hall (and ran for two editions in 2008-09 and 2011-12, Mabire and Merron raced the second one). So now there are two within two years of each other. Louis Duc one of the stalwarts of the class says “What annoys me a little is that these two projects are launched almost at the same time. If there is a viable race with fifteen boats that would be good. But now with two that might split the fleet. It’s a shame.”

On the other hand Mabire believes that the two are “complementary”. “A few years ago it might have been harmful to have two races round the world, but we polled the members of the class and learned their aspirations. And you realise that when it comes to round the world races peoples goals and ideas are very different. These two projects fit what people seem to want. The philosophy is not the same. Some may do both just as before there were those who raced the BOC and the Vendée Globe. ”

Catherine Pourre, another long time Class40 racer and officer of the class agrees, “I think that these are two different offers, they are not for the same groups. The Globe40 is aimed more at a pro-am mix, those with normal domestic lives and careers.” That is echoed by Louis Duc: “Manfred’s Globe40 is more like for amateurs who have limited budgets out to fulfil their lifetime dreams to race round the world. For them, this format is great, you go to interesting places. And it seems to me more complicated for professional skippers. ”

Indeed those professionals could well be tempted by The Race Around, according to Halvard Mabire: “The American approach is more traditional, on a tougher course, so probably more for professionals who do want to do the Route du Rhum. I cannot see them take on a round the world without doing the Rhum. The problem that we and others have had is keeping partners on board after the Route du Rhum, it is four years to the next one and a 2023 round the world can fill that void.” Sam Holliday adds:” The Race Around allows racers to continue their partnerships after the Route du Rhum.”

Valentin Gautier, a newcomer to Class 40 along with his compatriot Simon Koster and their brand new Mach 40.4 designed by Sam Manuard which is due out of JPS yard in late August, says “We sold two Jacques Vabres to our partners and for that reason, among others, the first round the world does not interest us. Eight stages may make costs quite high. But the second race fits the cycle in with the Route du Rhum and can be a solution to help continue the project and to further engage partners by taking them the next step on to an around the world. ”

The financial challenge is an aspect on which Louis Duc also highlights “Whatever the programme four or eight steps are expensive.” Catherine Pourre, who finances her projects from her own funds (she is a company director) admits to being “quite interested in the classical course”, the difference between a normal full season and a year with a round the world of The Race Around type will not necessarily be so massive: “Today a Class40 season costs me from 150,000 to 200,000 euros, with boat maintenance and no amortization because I own it. I think probably it would be about 100,000 euros more, which is not crazy at all. And if there is some (goods in kind/logistics) sponsorship for the organizer some of the logistics costs would be covered . ”

The two organizers are working on similar budgets: 1.5 to 2 million euros for the Globe40 Manfred Ramspacher said one month ago, looking to a budget underpinned by the start and finish cities and the stopovers. For The Race Around the budget, according to our info, would be close to 2 million euros including a decent prize money purse, underwritten by private funds.

Asked about the competition between the events, both play it more or less fair, presenting their respective models…… “We are in a world of free enterprise  and we can do our own projects but my own feeling is there would not be enough takers for a very professional type race so a little Vendée Globe mode. There are probably professionals who will be interested, but you need enough to create a major event. I don’t believe there is enough. That is what led me to the concept of Globe40 “, believes Manfred Ramspacher which aims for “20 to 30 duos” in 2021.

From his standpoint Sam Holliday who expects “15-20 boats” says: “I personally wish Manfred the best for the Globe40. I think he has a nice idea but I do have my reservations regarding the timeframe and logistics. 2021 is not far away and the Globe40 would be followed by the Route du Rhum – I personally wouldn’t be racing around the world prior to the Classes signature event. That said I firmly believe that although both races circumnavigate the globe the similarities stop there – we’re very different.” The two round the world races could even be more different because The Race Around could open its doors to solo racing. “The Class would like us to consider the option of a solo class and it’s something we’ll be discussing at length. Being several years out we have the time to understand the options fully and make a decision that’s within the best interest of The Race Around. For now we’re a double-handed race but never say never. “