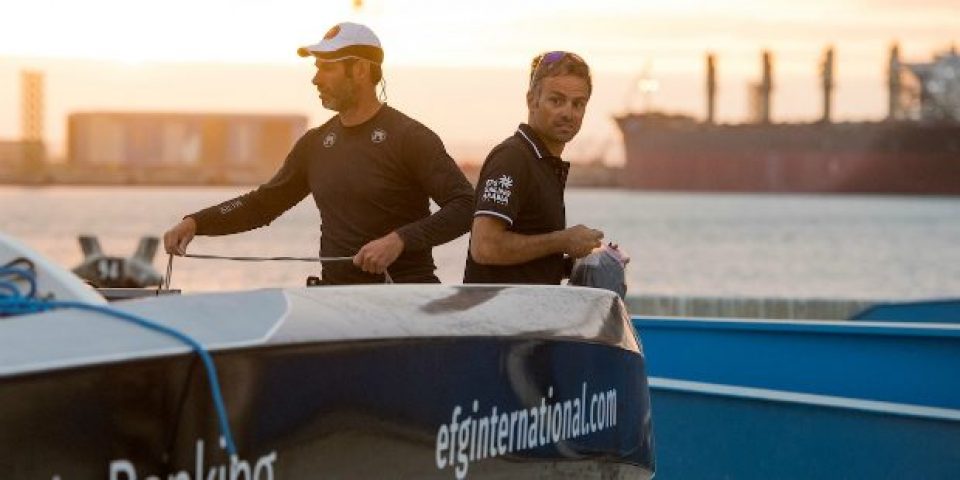 Franck Cammas: “Our challenge with Oman Sail is a big one”

Since early February Franck Cammas has been sailing in Oman under the Oman Sail colours on the EFG Sailing Arabia The Tour. It is the first major race of the new 2019 season on the Diam 24 circuit and the multi-stop, inshore series ends this Saturday in Salalah, the southernmost point of the sultanate. That is where, between the colourful locals and and tourists, Tip & Shaft met up with the accomplished French skipper who is now directing the European activities of the Oman Sail initiative.

You are seventh (out of 10) in the provisional ranking of Sailing Arabia The Tour, how do you view your return to the Diam 24?
Clearly it is a bit difficult for the moment. I am coming back to a series where there are several good crews who are very well trained and who have become real specialists, who have now been on the circuit for a few years. And, secondly we are not yet at that level because we do not have a 100% top professional crew with our Omani sailor on board who have more to learn. So that explains a bit why we are not, yet, at the level that we would like to be. So it’s a big challenge to succeed in this series and that excites me.

Coming from your background, is not it a little frustrating to be sailing with guys who are not at the level of some of the top pros?
Well of course we are not here with the best chance to win the Tour Voile in this set up, but this is the name of our game. We came here to Oman to get results, results gained with Omani sailors and the primary, fundamental goal is to train them and get them to a level where they become more self sustaining and autonomous.

How did you get involved in this project and how did you set out the the program?
They were looking for an organisation to manage their sailing activities outside Oman. Along with Louis Viat we responded to the tender and we were chosen. We had to adhere to a budget [which Cammas did not wish to reveal to us, Editor’s note] for 2019 being a year without a big boat or big transat type race, so we chose to focus on the Diam 24 and the Figaro, very high-level events and circuits which well suited to trainging Omanis without being too complicated to implement – from a technical and logistical point of view. I think it is more coherent than Class40 where it is more difficult to get Omanis to a level of autonomy.

What’s the objective in the Figaro this season, a new class and circuit for Oman Sail?
Well there is a real ambition to have one or two Omanis on La Solitaire, hoping that will create a momentum to be carried fowards for future years. If that can happen then that would be a bit of a quantum leap, since this has not really been achieved yet since the creation of Oman Sail, even if it is the ultimate goal to empower their sailors. Sailing with Sidney [Gavignet] on big boats and on the biggest offshore races was great in itself, but today there are now good sailors who are are great at the tasks they are asked to do but as soon as they are left alone then they have big gapsin their skills and abilities. So now here we are and I hope we will fill the gaps and make them solid, all round autonomous, independeny sailors.

Will Oman Sail race in the Sardinha Cup at the end of March in Figaro?
Yes, the skippers on the Sardinha will be Nicolas Lunven and Julien Villion, who will both sail  with an Omani sailor. They  are doing their first sails now on the first Figaro 3 [which was bought by Cammas company who rent it to Oman Sail, Editor’s note]; the second [chartered by Oman Sail from Charles Caudrelier, Ed] will go in the water soon. Then we will make our selection to know if we send one or two Omani safely on La Solitaire with a minimal performance goal:  it is important they are racing and not just in delivery mode, but even so we will not put them under too much pressure.

Is this not a bit too ambitious, given the starting point?
It’s a work in progress, right now we have three Omani sailors who have been working with very good sailors since November. They are so highly motivated and have a really great attitude. We will make a first choice after the Sardinha. Plan B would be to put only one Omani on La Solitaire and one French skipper on the second Figaro. And if there is no Omani able to race La Solitaire, we just won’t do it.

Could you race the Figaro yourself?
I’m probably going to do some training, but I’m not going to participate on the circuit because I already have other things on my itinerary between the Tour Voile and the GC32 with Norauto. I don’t want to compromise them.

Clearly the GC32 is still close to your heart?
Yes, it is a series that I am very attached to with very good level with international crews and the two events [those of GC32 Racing Tour and Extreme Sailing Series] now combined this year. Last year went really well [overall victory on the GC32 Racing Tour, Ed], so we wanted to continue, even if we battle to find the budget because the financial climate in France is not good.

The SailGP circuit started today with a French team skippered by Billy Besson. Have you been contacted by Russell Coutts to take part in the circuit and would that please you?
It’s hard to say that would not please me, as they are really great boats. With Russell, we had some contact early on just after the Cup, when things started to fall in place with Larry Ellison and Ernesto Bertarelli. But it was clear that there was a lot of tension between them and Larry ended up saying he would take it all and do what he wanted. After that we didn’t have any further contact with him. I think that Russell wanted to change the leading players away from figures best known for the America’s Cup. We must remember that in Larry Ellison’s mind, this was something that will compete against the Cup and he wanted to separate the two worlds by using young skippers. I’m pleased for Billy, and the young guys who did the Cup with me [Matthieu Vandame, Devan Le Bihan and Olivier Herlédant, who also sail on Norauto, editor’s note], and I’m not at all inclined towards competing against them. The aim is to beat the other countries, so it’s better if we all pull together in France.

Talking about the Cup, you didn’t manage to keep going with the Team France adventure. Why do you think it is so hard finding partners?
I thought the way we set things up with leading French hi-tech firms coming together in this project made a lot of sense and was attractive. A lot of people wanted to help us, but they weren’t all willing to put their hands in their pockets. In France, people don’t like showing they have a lot of money, but a project like this creates a lot and generates business. It’s not true that firms don’t have money. It’s more that they don’t like taking risks and doing something out of the ordinary. Today, I feel that reticence, the fear of how they are seen. In France there is only money in French sailing in French events and not international sailing.

Talking of international sailing, let’s move onto The Ocean Race. The directors of Oman Sail have several times expressed their desire to take part. What is the state of play today?
It’s true that in Oman they have no qualms about the Volvo. We’d love it to be like that this time again. I think that a project like Dongfeng had fits in with what they have been doing for ten years. Particularly as today the Omanis have much more experience than the Chinese did when they started. There’s no reason why that should not work. There are plenty of things that interest me in the next edition, particularly as there is the return to prototypes. Even if I don’t necessarily think that choosing an IMOCA was the best idea, I’m very excited about the idea of building an excellent Imoca. The project has been under discussion for six months. We always want things to move faster, but in my mind, the strategy is well defined.

What is that strategy?
I don’t want to say too much about it, as it might give some clues to our opponents. I know there is an American project run by a few of the leading figures from Emirates Team New Zealand with a Verdier-designed boat, which is already underway. We don’t have the same strategy. Looking at the overall situation, we want to get our boat in the water fairly late on to take advantage of what we see going on over the next few months. Then, we’ll make our choices. This year is going to be really fascinating with four different designers coming up with new IMOCA boats [VPLP, Guillaume Verdier, Juan Kouyoumdjian and Sam Manuard, editor’s note]. Often, there is one that comes out on top. It will be good to see that one, as that will mean we will be setting off on good foundations. However, that won’t be enough because of the means at the disposal of the Volvo teams, who can push the research further than what we see in the Vendée Globe. I’m convinced if wel win the Volvo, it will be with a specific boat where no compromises have been made. It will be easier to adapt a boat for the Vendée Globe than to move in the opposite direction.

The Vendée Globe is one of the few races you have never done. Given this context, could that now interest you?
If there is a formula that works with the Volvo, it would be logical to do the Vendée Globe afterwards. Not before.

One last word on the Ultime 32/23 class, you still love the big trimarans?
Yes of course. They are extraordinary boats. I have sailed on Banque Populaire with Armel [Le Cléac’h] and I am currently involved with them joining meetings with his team to define the design choices for the future trimaran, I am delighted to keep working with them.