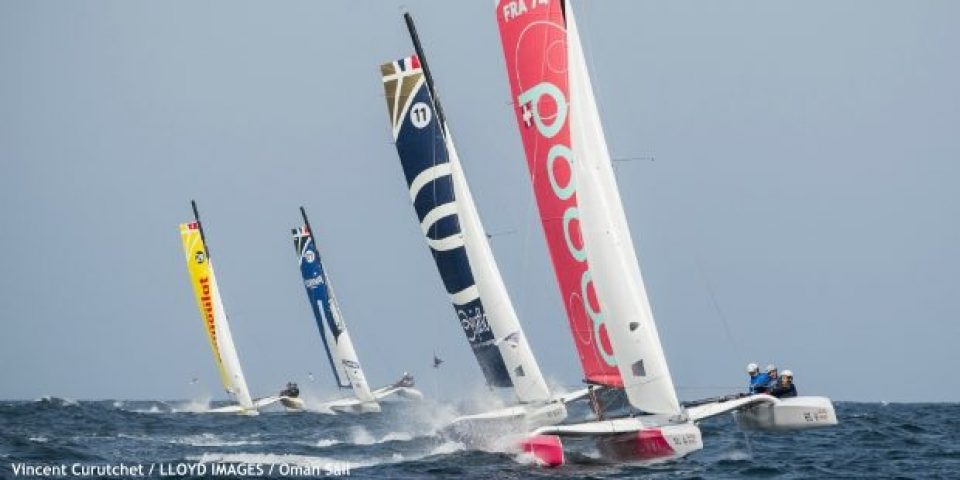 Tour Voile and the Diam 24 : better organised with a more cohesive race structure

Launched in 2015, the Diam 24 circuit starts its fifth season on Sunday with the Sailing Arabia The Tour. After that is the Tour Voile Series, the preparatory events which will lead into the Tour Voile, which of course is the pinnacle event of the season. Tip & Shaft tells you more about the class and the circuit that, step by step, gets more professional and better organised each year.

After the first boats were launched in 2014 the Diam 24OD class was created in 2015 and was primarily based around Vianney Ancelin, the boss of the ADH Inotec yard, the exclusive builders of the VPLP designed 7.25 metre sports trimaran. Today there are about 100 boats on the water, about one third of them outside of France.
“Vianney has held the reins of the class on his own a bit, but little by little, the input of team managers and sailors is a catalyst for changes. Increasingly this proves that they want the class to have a long life, they (the sailors) want to share in the future “ says Daniel Souben, four-times winner of the Tour Voile and a member of the board of directors of the class which became recognized by World Sailing at the end of 2018.

This board of directors was expanded during the last AGM in December. Today it comprises president, Christian Dulot, a vice-president, Claire Leroy, the treasurer, Vianney Ancelin, secretary, Julie Barrès, and Stéphane Fretay. Now Bernard Stamm and Daniel Souben are respectively chairmen of the “technical class rules” and “events” commissions. “The class is dynamic, with racers who really take representation seriously and and become conduits for us. That is always a good sign,” said Jean-Baptiste Durier, the director of the Tour Voile at the Tour Voile owners and promoters the Amaury Sport Organization (ASO).

One of the missions of the “event organizers” commission was to work on a more cohesive calendar especially the 2019 of Tour Voile Series, making the lead up events to the Tour Voile a de facto series. “The goal is to extend the season with linked events which allow the level to rise and more material to be output before the Tour, making it better for teams and sponsors” says Vianney Ancelin “ A fifteen day Tour is too short. We want the teams to be able to sail and sell a five month season and so have more visibility. ” ASO was asked to provide financial support. “This initiative by the class suits us very well, we will help with the communications and it allows the sailors to sell their projects better.”, confirms Jean-Baptiste Durier. ASO’s priority is to find a title partner for the Tour Voile (at around 1.5 million euros) “We have a big task but it is progressing well,” says Durier the director of Tour Voile.

Previous to the Tour Voile Series, the Diam World Tour was introduced last year. Now, this year it comprises Sailing Arabia The Tour (SATT), the Tour Voile, a tour of Italy in September which is called the Nastro Rosa and finally the Grand Prix Pacifique des Jeux which takes place in November in Tahiti. “The first season was a bit risky, but with ten crews at a high enough level in Oman this weekend, that is a good sign to start with, but there must be enough at all events,” reckons Emmanuel Versace, co-organizer of the Tahitian event. “We are trying to develop the class internationally,” says Pierre Mas, Beijaflore’s team manager, ”And so that is the case in Oman and in Tahiti where they can attract Australian and New Zealand racers, or in Italy, where there should, we hope, be local teams. ” Another point is made Vianney Ancelin: “Two-thirds of the boats stop sailing after the Tour Voile, that hurts the series. The World Tour offers more, good races now in the second half of the season”.

But participating in these events costs hard cash. For example the Grand Prix Pacifique des Jeux costs between 22 500 to 26 500 euros (all inclusive), according to Emmanuel Versace, around 25 000 euros for the Nastro Rosa, according to its Italian organizer, Riccardo Simoneschi. The new Italian event has modest ambitions for the moment. “The goal is at least eight boats of which four would be French,” said Vianney Ancelin. Italian sailor and promoter Riccardo Simoneschi – a veteran of the Melges circuits – is “confident” with a programme which “starts at the Genoa show and ends at the Barcolana which in total gives us valuable exposure to 300 000 visitors“.

The Sporting Level Goes Up but Budgets Hard to Secure

It is universally acknowledged that the level of the Diam 24 circuit continues to go up. “Before, if you made a mistake on the Tour you lost five places, now you can lose twenty,“ says Valentin Bellet, the young skipper of Beijaflore. “They are complicated regattas. More and more you need to be fully trained,” says Bernard Stamm, the round the world racer who is now the manager of Cheminées Poujoulat, steered by Robin Follin, from Team France Jeune. These two teams, on the SATT right now, will be among the leading contenders for overall and event wins, as will be Vannes Agglo(Robert Solune), Team Ixio, which has recruited Tim Mourniac. Seaflotech are a new team managed by Lionel Péan with Sofian Bouvet back at the helm, there is the Swiss CER team, the girls of La Boulangère who, according to their manager Claire Leroy, “are aiming for the Top 7 overall “, the duo Damien Iehl / Aurélien Ducroz (Mood), and there are two Omani teams led by GBR Olympian Stevie Morrison and Franck Cammas. The return of Cammas to the Diam 24 [he finished second of the Tour Voile with Groupama in 2015, Ed] is definitely good news: “When Franck is on a circuit, it immediately lifts the sporting value and media interest “ confirms Daniel Souben.

But the coach of Team Vivacar on the last Tour, Souben, believes: “Projects are complicated to sell. The main thing is that it is still expensive: for a pro project, we are in the same region as a season in the Figaro or Class40, and so we are in competition with them in terms of delivering value, so we are talking about 300 000 euros ex tax.” Some teams are still looking to close their budget. That is the case for Mood who are seeking a a partner for the Tour Voile, and Tresors de Tahiti. At Seaflotech, Lionel Péan, founder of the company and manager of the team, says: “We have a modest budget around 200 000-250 000 euros. But I’m hopeful of finding partners for us to help develop the team “. Emmanuel Versace, helping the pairing of Damien Iehl and Aurélien Ducroz to find new partners, is more cautious: “The Tour is not so straightforward to sell. It’s strength is more in terms of BtoB and internal comms, less so for exposure to the general or sailing public.”

Despite these small difficulties participation in the circuit and the Tour Voile remains relatively constant, with some thirty crews lining up, including amateurs who work with average budgets of 150,000 euros excluding tax. The class does seek to control budgets, like choosing to limit technical developments. For example: “We worked on the sail plan, adding a code zero and a larger gennaker,” explains Daniel Souben. “Technical tests were good and approved by the teams, but we finally gave up because the extra cost was order of 6,000 to 7,000 euros “. Talking about ongoing support for the Tour director Jean-Baptiste Durier says, “We have announced that the Diam 24 will remain the tour boat until at least 2021. We want it to work for everyone for as long as possible because it helps to spread the costs and so help with the overall costs.”