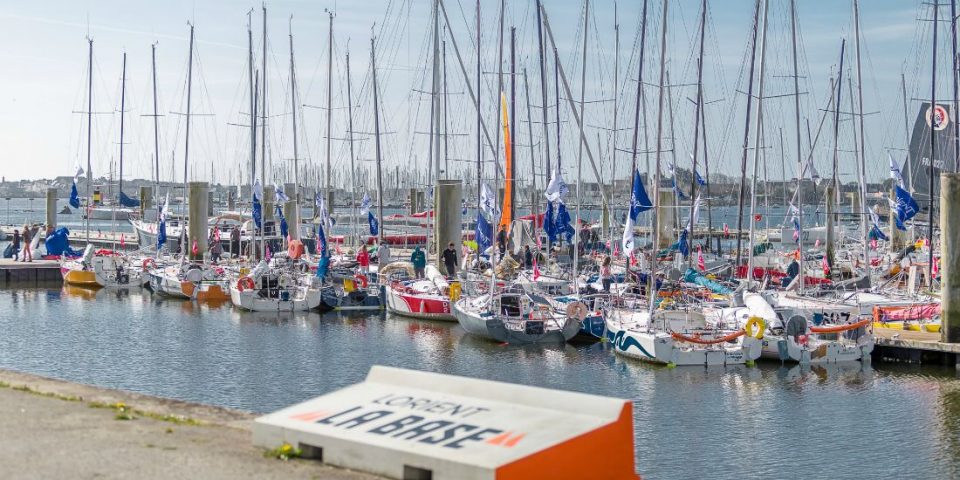 There are new Ultimes on the way for Sodebo, Macif and Banque Populaire, Vendée Globe projects are multiplying like rabbits (there are 48 active projects according to SAEM Vendée), there is  the ongoing success of the Class40 plus the bourgeoning enthusiasm for the Mini circuit. The success for French ocean racing is gratifying and well deserved, bringing employment and investment but right now there are logistics and space issues, especially in Southern Brittany – Lorient, La Trinité-sur-Mer, Port-la-Forêt and Concarneau. Tip & Shaft takes a tour round to evaluate the extent of the problem that so many sailing regions would love to have…

“You could all it a housing crisis….” says Brieuc Morin the Director of Sellor, the company that manages the marinas of the Lorient Agglomeration. He is juggling with a shortage of space at the Lorient la Base hub which specializes in top end ocean racing race boats. There are three Ultime teams there – Banque Populaire, Gitana Team and now Sodebo, whose giant hangar is rising fast from the foundations as we write. There are a dozen Imocas destined for the next Vendée Globe(Jérémie Beyou, Sam Davies, Isabelle Joschke, Thomas Ruyant , Maxime Sorel, Giancarlo Pedote, Stéphane Le Diraison, Kojiro Shiraishi, Pip Hare), probably forty Figaros (2 and 3), 20 to 30 Class40s and a raft of Minis which are all preparing for the 2019 Mini-Transat. All are based on the docks and pontoons of Lorient and the management of space and berths is becoming increasingly complicated.

An established skipper but a newcomer to the Imoca class, Maxime Sorel says he is even worried about finding a space in Lorient for his IMOCA 60-footer V & B which is currently in build at Kairos, in Concarneau, “With all the Vendee / Volvo projects we were not even really sure of having a place at La Base (Lorient). I hope that having been in Lorient for a few years now and being part of the Lorient Grand Large training group will count for a lot. Surely they will make sure we can stay. ”  But when it comes to who gets what, one of the main influencing factors is economic: “The priority is employment, the economic impact of projects.” Brieuc Morin advises, “We know for example that a Ultime needs at least 20 people and benefits skilled local people. But we also try to help people who have been here for a long time. For example I can’t see us telling someone like Thomas Ruyant, who has been here for years, that he has to leave to make way for new incoming teams.”

It seems like Ruyant should be OK to hold a place on the pontoon but as for a hangar and for offices, he has had to turn to the private sector and rent from the Ocean Development company of Franck David. Team manager of Ruyant’s project, Marcus Hutchinson explains “There was no more room anywhere, so we had no other choice.” “The pressure is everywhere.” affirms Morin, Director of Marinas Group Sellor, “Right now it is very difficult to guarantee an IMOCA project a place afloat and a place on the land as well. It is 100% full. I think there are just two developments coming on line, the hangars currently being built by Tara and Lyophilisé.fr and they will rent out part of them. ”

One part of these hangars is to be taken by a big sailmaker – rumoured to be Incidences Sails – who have just announced their own race trainning team initiative and a Superyacht facility in Lorient to be on stream in Lorient before the end of 2019. Meantime North Sails had planned to set up their research and development centre in the of Groupama Team France building before it was destroyed in a fire in June. And many suppliers (electronics, deck hardware, software) are wanting space as per the original intention to have La Base as a centre of excellence for such top end companies, but now they are struggling to find space.

A tenant since 2006, Jérémie Beyou explains: “When I settled here way back at the time of (his 2008 IMOCA) Delta Dore, we were tossing up between Port-la-Forêt and Lorient. We chose Lorient because we already sensed what would become of La Base as a whole. We had the opportunity to own our building. And of course the body of water here is also perfect: you can go sailing almost all the time, with the opportunity to sail inshore in flat water protected by Groix Island or go offshore easily to find swell “.

The Agglomeration of Lorient launched in January an extension project to serve the growing demand, showing that Lorient fully intends to assert itself as the leading centre for ocean racing in Brittany. However, it is not alone: La Trinité-sur-Mer is home to three Ultimes – Spindrift 2, Idec Sport and Actual – which, when they are all there, take up a lot of space in the Loïc Caradec dock leaving little room in particular for Imocas, which are limited to two or three places due to their draught. “From 2020, we’ll be setting up a committee to allot places, because we are unable to receive as many boats as would like to come and the port cannot be extended,” said the Director, Marc de Ghellinck. Present in La Trinité for more than twenty years, Marc Guillemot, who now has two Figaro 3s there, adds: “Before, you just had to turn up to get a berth, but today, it’s true that is rather worrying for the years ahead, as professional racing is a sector that is continuing to develop.”

Further north, Port-la-Forêt, which according to Marcus Hutchinson, has a drawback for the Imocas “due to its lack of water,” is also close to being full, with depending on the time of year, one or two places for the Ultimes and six to eight for the Imocas, which today are practically all reserved for Jean Le Cam, Romain Attanasio, Sébastien Simon, Kevin Escoffier and Charlie Dalin. The latter with his 60-foot Apivia, just like the Macif trimaran, will be crossing the bay in a year from now, as MerConcept, François Gabart’s company is moving in the spring of 2020 to a single base in Concarneau. What was the reason for that? “We wanted to bring all our people and boats together in one place. We chose Concarneau, as there is room to handle boats with harbour-sides that are suitable and there was an area available for us. François wanted to remain close to Port-la-Forêt and the Finistère Course Au Large training centre” explains Thomas Normand, managing director of MerConcept.

Concarneau is also home to Roland Jourdain’s Kairos company. He says: “I often say that we’re in Switzerland here: with Port-la-Forêt and Lorient, we can do things quite discreetly and all sorts of things are possible. There is fishing, boat-building, all the suppliers, us and soon, Macif. It’s not just one culture and I believe that we shouldn’t copy what the others do.” Will the arrival of MerConcept attract others? “Space remains limited. Several racers came to see me and we’re studying the possibilities, but we’re not doing any special advertising, because we don’t want to give false hopes to any ocean racing teams”, concludes ” according to Xavier Rasseneur.