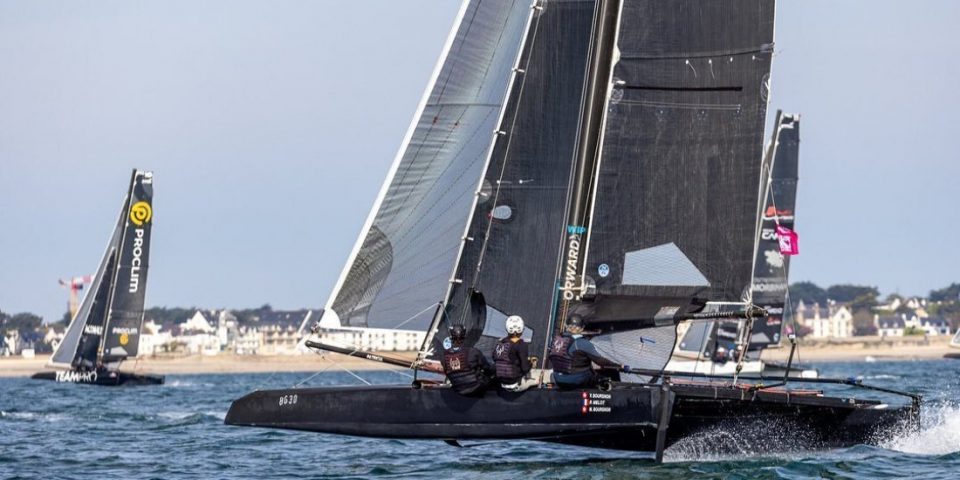 Yvan Bourgnon: “My objectif remains the East to West multihull round the world record”

At the age of 50 Yvan Bourgnon now divides his time between the Seacleaners organisation which he founded five years ago, a part time profession as a lecturer and sailing: he races in the Ocean Fifty class with Gilles Lamiré, on the Nacra 20 with his son Mathis and on the ETF26 Series leading the Zizi to Fly crew. As he prepares to compete in the Raid Quiberon, Tip & Shaft caught up with him.

How and why did you get into the ETF26 Series circuit?
Really it was about me wanting to a lot and an opportunity. In 2020 I had the opportunity to buy three ETF26 on sale in Switzerland at reasonable prices because they had been damaged after capsizing during that Bol d’Or 2019. I thought to myself I would be able to restore two of them, one to sell and a second for me. Getting into it was not so easy with Jean-Pierre Dick who ran the class, he was not really very open, because he was worried about the boats which he considered a little downgraded but in the end it has been fine.

And how did it go to start with?
Well we sailed quite a bit in 2020 to learn the boat, then we joined the circuit in amateur mode. In the beginning we were making up the numbers just a little but today we manage to keep quite a few boats behind us even if we know that we will probably never be on the podium, we must get ahead of ourselves. We have a lot of fun. It is a great class it is accessible. The boats have some drawbacks, because they don’t lift off and fly so very early and not upwind, but they provide great sensations and in the end they are quite solid and stable. And the class is developing well. Some foreigners are very interested in it. I have had a lot of requests for my second boat [the price is about 70,000€], New Zealanders, Dutch…. the Danes from SailGP rent it to me for the Raid Quiberon. And so in the end we plan to put the third into service even if it needs modifications but that will be in March 2023. So with ten boats available today for racing, there is surely a bright future, especially as they will evolve, with bigger horizontal foils on the rudders next year and then probably new foils in 2024.

Who do you sail with and what do you reckon is the budget for a season for you?
It’s a 100% amateur project, so the budget is small. I personally spend probably 20,000 euros a season and we have zero sponsors, we try to do everything with that. I could look for sponsors, but I don’t have the time. I have tens of millions of euros to find for the Seacleaners association, it is more important for me to find millions than 50,000 or 100,000 euros for the ETF. And I sail with my son Mathis and Paul Melot who is a former sports catamaran champion.

“We are sincerely sorry for Sébastien”

Now let’s talk about Ocean Fifty and your collaboration with Gilles Lamiré, you had a fairly eventful Bonifacio Grand Prix where you had to retire after hitting Primonial, can you tell us?
What happened is that we were in the start phase, we were in the process of beating upwind below Koesio, we did not see Primonial coming downwind. When we finally saw them I heard the crew shouting, but I thought it was for Koesio because I was passing a meter behind them but in fact, it was for Primonial. I could not avoid a collision. It’s clearly the worst moment of my sporting career. I still have trouble accepting, believing what happened because it’s terrible to put another boat out of the race. I have nothing against Gilles, he is someone I greatly appreciate with whom I have been sailing for six years, but in this Grand Prix, he just arrived from Guadeloupe, we arrived wit no real training, without any preparation, we were not in the best conditions to race in safety. I blame myself, because I was at the helm, maybe I should have been more careful at the start given this lack of preparation. We are sincerely sorry for Sébastien (Rogues) who is struggling to repair his boat for the next race, I hope he will be in Brest.

And Gilles?
He is doing everything to get fixed as quickly as possible, but repairing the damaged float will take a long time, he is missing 2.5 meters of bow. There, they have just started the construction of the part at Lalou Multi, afterwards it needs to be put together in Marseille to get the boat to Brittany, it is a tough mission.

What do you think of this Ocean Fifty class?
When I see all the budgets for the Vendée Globe and relatively few teams joining up in the Ocean Fifty, I find it hard to understand. It is an exceptional class that has echoes of the Orma that we created in the 1990s. The boats go as fast, they are just as spectacular, they all go at the same speed. Surely there is everything to make sponsors excited. In my opinion, two or three headline names are missing today that would allow the class to explode. At some point you would think that sponsors have to wonder if it’s not better to come to a super nice circuit like this rather than to be 17th in the Vendée Globe.

Do you race other classes?
Yes, we have an important objective with Mathis and that is the Nacra 20 world championship in Hyères in September. We were European champions in 2019, it’s not a class where there are a lot of boats, but there are very strong guy and a lot of very good amateurs who sail a lot.

Today would you describe your job as a sailor or what?
My two current jobs are environmentalist, since I give 50% of my time as a volunteer to the Seacleaners association, and 25% as a lecturer/speaker, the remaining 25% of the time, I spend money competing. Now my goal is from 2025-2026 is to get back into the ocean racing game. I give myself two-three years to launch and grow the Manta [project for a plastic waste collector boat, editor’s note], after that, I think I will have more time to go sailing. My goal remains the East to West multihull round the world record. For me, it’s one of the last great planetary challenges of ocean racing, it’s very engaging. What really stimulates me is to give my everything, I like extreme challenge and I like competition. I aspire to both, I need these alternatives.

What boat would you see yourself going on?
It’s too early today to say which boat might be available in 2025, but if I have the choice, I’ll look for a solid boat, like Idec, you put a smaller mast, it’s the dream boat to do this world tour. I am surprised that Francis (Joyon) never wanted to tackle this, because he has the mindset and the boat to do it.

A final word on the Bourgnon “dynasty”: Basile, your nephew, is starting this year on the Figaro circuit what do you think of him?
What is impressive about him is his maturity. His father (Laurent) also had exceptional maturity, Basile really soaked up all that. He has this fear of nothing but while being calm, thoughtful. I discussed it with Yann Eliès who sailed with him in Figaro and he was quite amazed, he considers that he is very promising. And he has an advantage that unlike his father he is very hardworking. Laurent had a messing about side, he only did what he liked. For example, he didn’t work much on the meteo because he didn’t like it, whereas Basile isn’t afraid to show up every morning at Port-la-Forêt to take on the sailing days and learn the meteo strategy because he does not want to have gaps in his armoury.

And your son Mathis, does he also aim to make sailboat racing his job?
For now, he has one foot in, one foot out; there, he got a taste of professional life, he has been working since September at Forward Sailing, but he devotes almost all his available time to sailing: he is in the Swiss Sailing Team, he does Flying Phantom, M2, all the evening races on Lake Geneva, plus the regattas with me in ETF and Nacra. So will he switch to full time competitive sailing? I think deep down he wants to, but right now he doesn’t have the prospects rolling out ahead of him like Basile has with the Edenred team. But learning, setting up and optimising boats and looking for sponsors, is all part of the  learning.