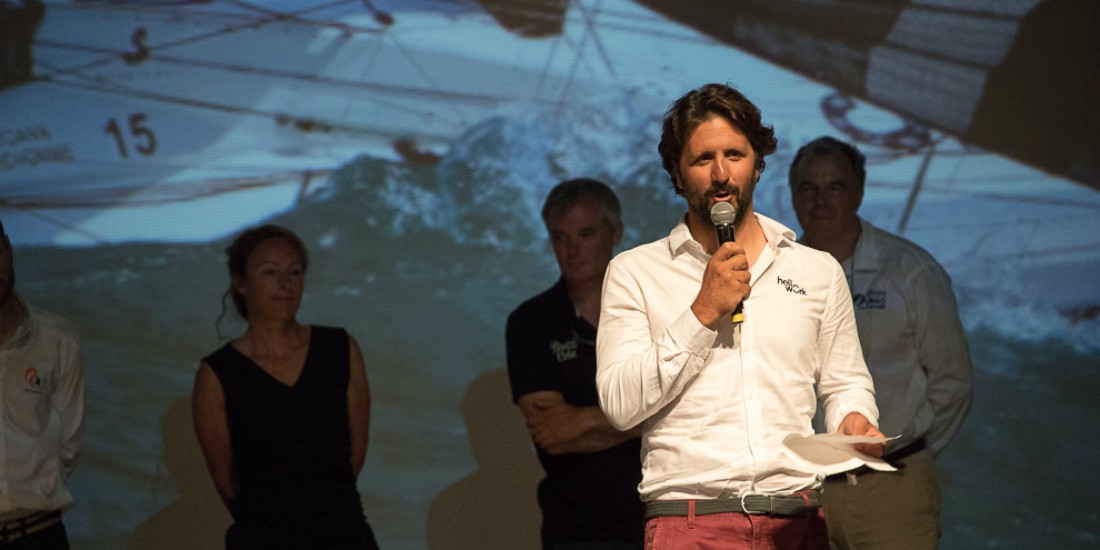 The new double winner of La Solitaire URGO Le Figaro, Yoann Richomme, has stood out not just for his mastery on the water but his serenity and confidence. If he can sometimes give the impression of being laid back and looking like does not really care, the skipper of HelloWork-Groupe Telegramme turns out to be a very hard, diligent worker who leaves nothing to chance. Tip & Shaft tried to find out more about the first sailor to win La Solitaire URGO Le Figaro in the Figaro Beneteau 3.

Seven months after he impressively won the Route du Rhum-Destination Guadeloupe in Class40 on a cutting edge new boat which he had only launched four months earlier, Yoann Richomme has just won the Solitaire du Figaro for the second time. His win has been deeply impressive, even to those who know him very well. “Compared to all the others who were a bit roller coaster from one stage to another, apart from that 13th place on the stage past Alderney, Yo is one, two and four. He really was the boss“, comments Damien Seguin who is close to the double winner of the Solitaire. They will race together on the Jacques Vabre for a third time this autumn.

Fabien Delahaye who is also in his close circle of mates adds: “On this Solitaire he was imperial. He has always been a leader and he could have won all four stages. He had a lot of confidence in himself.” This confidence was particularly evident on Stage 4, the last stage when, as Owers’ mark approached, he left the pack and tacked north up to Saint Catherine’s at the Isle of Wight when he could have stayed in touch with his closest opponents.

“Yoann has always been prepared to risk, to be a player, but on this one he was on form, he does his thing in his corner, makes his choices and that is good.” says Christian Le Pape, head of the Pole Finistere Course au Large. “He sailed his own race as always, without much concern for the tracks of others. He needs to be free of others’ ideas and courses. His is an uninhibited viewpoint,” stresses Charlie Dalin who was his team mate at Macif/ “That’s Yoann, if he thinks that’s where he needs to go, he goes,” said Donatien Carme, faithful preparateur of the skipper of HelloWork-Telegram Group for 8 years.

But at the same time, he does not take thoughtless risks, not any more. “Before, he was capable of some very good things, but also of bad, sometimes he went with too risky options. As soon as he calmed down his strategies, it went much better. ” analyses Fabien Delahaye who saw things definitely click during that 2016 Solitaire victory in the colours of Macif, who he was with for three years.

Yoann explained to Tip & Shaft: “My first year with Macif was very complicated: I lost out and didn’t understand why. I finally started to get things into perspective, particularly with being alongside Charlie (Dalin), who does things his way without worrying about what other people might think. When I raced in the Transat AG2R with him, I finally saw how committed he was on the boat. It was a revelation to me. I simply hadn’t been showing enough commitment.” His brother, Martin, who is six years younger than him works as a designer for Spinlock, and believes those years with Macif were decisive: “The competition with Charlie was fantastic. He was able to see how much work was required to be out in front.”

“Today, his level of commitment is phenomenal. He works extremely hard and never leaves anything to chance. If he is now one of the gang with Le Cléac’h, Lunven and others, it’s because he works the same way,” added his father, Yannick, director of development of the Incidence Group, which includes Incidence Sails, Incidence Technologies and Delta Voile. That is the father who gave him a real taste for the sea. Returning from a three-year professional stay in Philadelphia they brought back the family cruiser to France via Bermuda and the Azores.

“This first experience opened my eyes to the open sea, but it was after, during my studies in naval architecture in Southampton that I really discovered the sailing as a high level sport while working on a Tour de France project. Developing and project management really appealed to me.” The virus strikes. On his return to France, Yoann cut his teeth as preparateur for Roland Jourdain‘s 60-foot Imoca, Bilou recalling “lively discussions on technical points, he was on the ball”. He also worked for Charles Caudrelier and Nicolas Lunven, before starting on the Figaro circuit in 2010 where, according to his Aunt Isabelle who was in Dieppe on Wednesday to see his victorious finish at at the pontoon in Dieppe, “he evolved quietly, understanding things little by little. ”

If the victory in the Solitaire in 2016 rewarded his development, the outcomes were not quite as rosy as Richomme would have hoped. “When he won the Solitaire, he thought the doors would open, the sponsors would come to him. It did not happen that way, we had to rebuild everything, ”  confirms his partner Margaux. So he set up the Imoca project on Roland Jourdain’s former Veolia Environnement alongside the owner, Pierre Lacaze. “That was an experience which gave me confidence in my ability to analyze and develop a boat because we did a decent thing in the Jacques Vabre with an old boat.”

Richomme then took the risk of launching a Class40 project for the Route du Rhum 2018 when he had no sponsoring partner. “His philosophy is that he believes that to have projects you must take the risks otherwise you do not move forwards” confirms Margaux. That is a strategy which paid off but it was not all smooth sailing. On his way to the Rhum win Yoann Richomme confides he nearly burned out. “There is a calmness at first, but he is very sensitive and takes things to heart. As the Rhum project went on there was an anxiety it would not succeed. But in the end it was great. “continues his companion.

His transatlantic Rhum victory proves his technical ability to take charge of a project and make it a winner. “Yoann approaches his projects in a thoughtful and empirical way, he manages to do everything in an ordered fashion,” confirms Charlie Dalin. “He has never had huge resources, but one of his qualities is knowing how to plan and adapt. This is a real plus. We have seen on this Solitaire that has adapted to the conditions to make choices which were rarely bad ones “adds Damien Seguin who highlights his ability to adapt and his openness as facets which come from his years living abroad.

For preparateur Donatien Carme, “Yoann has a curiosity for a lot of things, when he comes home at night he looks at machine tools, five-axis tools, he wants to understand everything.” He is a bit of a master-of-all-trades is Richomme, knowing a lot about many different things. The young father of a little girl, who will celebrate his 36th birthday on July 12, claims: “I left to do a computer science course and I changed to study naval architecture. I have never put it into practice because I went straight from preparateur to sailor. And I feel that I am able to do many other trades. The day that competition no longer excites me, I will pack everything in the car and I’ll  turn the page and do something different. ”

Yoann Richomme is working with the team at Le Hub by OC Sport, who recruited him to replace Charles Caudrelier on their boat,  to find a budget to make the start of the next Vendée Globe on the Lombard design on which he raced the last Transat Jacques Vabre. “We are doing everything so that something happens, we have a part of the budget, the boat, the hangar, there is nothing left to do,” Richomme says.

Christian Le Pape concludes: “With two victories in La Solitaire three years apart, Yoann is one of the most important people in the world of sailing, he is bankable and deserves to have a big project.”

Will Oxley: “I’d like to be involved with at least one more Ocean Race”
16 January 2020

Imoca: The boatyards are ringing in the changes for the Vendée Globe
14 January 2020